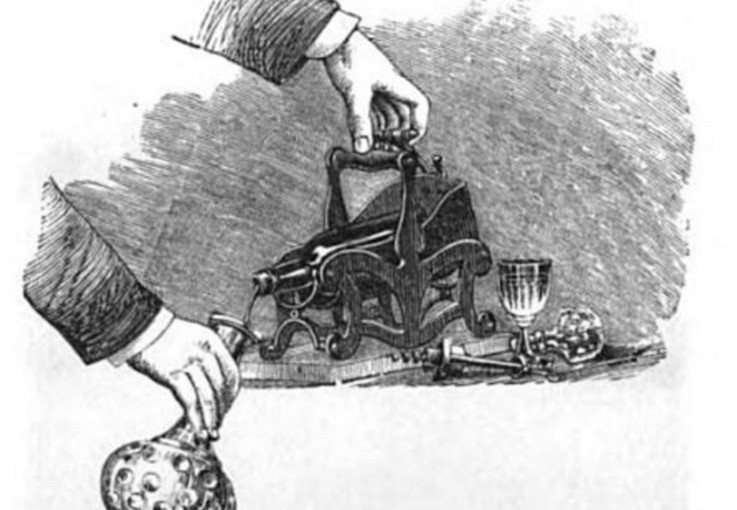 As Christmas celebrations fade away and battered livers dubiously await the assault of New Year’s Eve, now is a good time to consider one of medicine’s oldest questions: how to counteract the effects of alcohol. Nineteenth-century medical writers seem to have been more concerned with prevention than cure: journal articles say little about curing a hangover, but contain several methods claimed to provide a rapid cure for intoxication. This one comes from The Mirror of Literature, Amusement, and Instruction, published in 1836:

A French journal observes that the cabbage is a sovereign remedy for intoxication from wine, and that it has even the power of preventing it; for, we are informed that, by eating a certain quantity of cabbage before dinner, we may drink as much wine as we please, without experiencing any inconvenience. This property of the cabbage is also mentioned by ancient writers, who are of opinion that it proceeds from the antipathy which the vine shows to the cabbage: if a cabbage be planted near a vine, the latter either retires or dies.

This remedy, which was supposedly employed by in ancient Greece and Rome, is also mentioned by The Parlour Portfolio (1820), which offers one possible explanation for the German enthusiasm for sauerkraut:

The phenomenon is indisputable, and the recipe, which was declared to be effectual by the ancient Egyptians, is now universally adopted in Germany.

The American Scrap Book (1862) offers an alternative apparently preferred by soldiers, which sounds most indigestible:

Military men have discovered a new remedy for intoxication, which we believe is not “down in the books.” It is nothing more than raw potatoes, which are cut up in slices and eaten without salt. An ordinary “murphy,” it is said, will cure the most obstinate case in half-an-hour.

Slightly more scientific (though not much more) is a recommendation made in The London Medical Repository and Review in 1825.

The acetate of ammonia, in the form of the spiritus mindereri, has been frequently given in Germany to dissipate the effects of drinking. Common vinegar is at least equally efficacious: a wine glassful given to a man who has drank to excess of wine, or, we believe, of spirits, will make him comparatively sober almost immediately.

The obvious problem with this remedy is inducing the patient to down a whole glass of vinegar.  I suspect that most of us would prefer to carry on drinking, and to hell with the consequences.  Slightly more palatable (but about as likely to work, i.e. not very) is this option from the British Medical Journal, published in 1861:

Lecoeur recommends common white sugar, as calculated to prevent the development of the phenomena of intoxication, resulting from alcohol and substances containing it. From five to ten pieces of moderate size are to be taken in succession, just as the symptoms of intoxication are beginning to develop themselves. The sugar is supposed to act either by modifying, retarding, or altering the mode of fermentation taking place in the stomach, or by combining with and neutralising the acids which are generated in the stomach, in consequence of the imbibition of alcohol.

Five years later a compendium entitled Hints for the Table had a variety of suggested remedies for a hangover, some of which are still in use today:

Onion soup is thought highly restorative by the French. It is considered peculiarly grateful, and gently stimulating to the stomach after hard-drinking or night-watching, and holds among soups the place that soda-water, Champagne, or ginger-beer does among liquors.

Its suggested method of sobering up the inebriated is less sensible. A brandy chaser does not seem the best way of recovering from nine pints of bitter:

Brandy has been found a perfect antidote to drunkenness from beer. A man upon whom the experiment was inadvertently made in the south of France, described himself after the intoxication had left him, as “awakened from a long and painful dream.” This curious remedy has since been tried, and always with success: and a French physician has verified it.

Yeah, right.  Finally, a helpful tip for owners of drunken elephants, published in 1840 in The Literary World.

In India, when, on great festivals, elephants are intoxicated with brandy for the purpose of fighting them, they are rendered sober, as soon as desired, by swallowing about three pounds of fluid butter (ghie), which the elephant gulps down greedily. Dromedaries and camels, when ‘mosti’, or intoxicated, are similarly sobered.

Useful if you have an inebriate pachyderm in your household. Alas, the author omits to indicate whether eating large amounts of clarified butter also works for humans.

3 thoughts on “Sober up the nineteenth-century way”