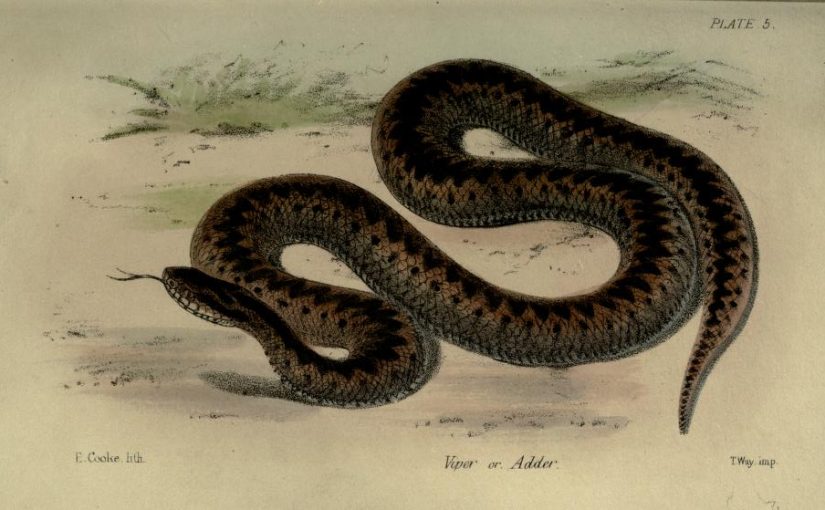 In 1862 an Edinburgh-trained physician, Dr James Hastings, published a slim volume about the treatment of tuberculosis and other diseases of the lung. It advocates the use of substances which much of the profession would regard as unorthodox, as he acknowledges in his preface:

It has been suggested that the peculiar character of these agents may possibly prove a bar to their employment for medicinal purposes.

Dr Hastings then anticipates another likely objection – that the ‘medicine’ he recommends is difficult to get hold of. Fear not: he can recommend some suppliers.

It may be useful to add that these new agents may chiefly be procured from the Zoological Gardens of London, Edinburgh, Leeds, Paris, and other large towns. They may also be obtained from the dealers in reptiles, two of whom — Jamrach and Kice — reside in Ratcliffe-highway, whilst two or three others are to be found in Liverpool.

One might reasonably ask what sort of medicine can only be purchased at a zoo or pet shop. Dr Hastings explains that he spent several years trying to find new medicinal substances in nature.  Deciding that the pharmacy was already ‘crowded with medicines derived from the vegetable and mineral world’, he resolved to investigate possible miracle cures in the animal kingdom.

It would be foreign to my purpose to detail here the various animals I put in requisition in the course of this investigation, or the animal products I examined during a prolonged inquiry. It is enough to state that I found in the excreta of reptiles agents of great medicinal value in numerous diseases where much help was needed.

Yes, Dr Hastings’s miracle cure is reptile excrement. The book is entitled An Inquiry into the Medicinal Value of the Excreta of Reptiles. 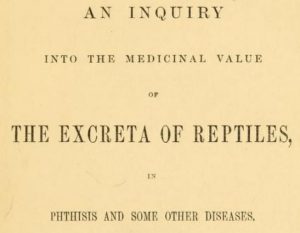 Which reptiles, you may be asking?

My earliest trials were made with the excreta of the boa constrictor, which I employed in the first instance dissolved simply in water. A gallon of water will not dissolve two grains, and yet, strange as the statement may appear, half a teaspoonful of this solution rubbed over the chest of a consumptive patient will give instantaneous relief to his breathing.

Not just the boa constrictor, either. Dr Hastings provides a list of the species whose droppings he has investigated: 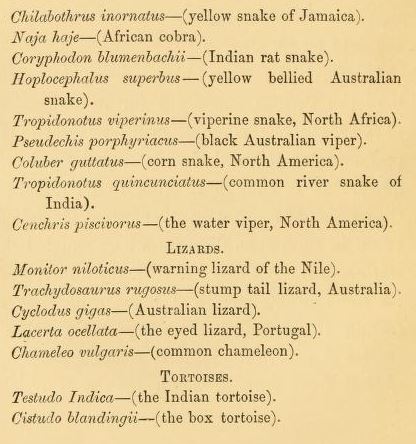 The book contains a large number of case reports. The first concerns ‘Mr P.’, a 28-year-old musician who consulted him and was diagnosed with tuberculosis:

I prescribed the 200th part of a grain of the excreta of the monitor niloticus (warning lizard of the Nile) in a tablespoonful of water, to be taken three times a day, and directed an external application of the same solution to the diseased side. He was much better at the end of a week, and after a further week’s treatment I lost sight of him in consequence of his believing himself cured.

Or there’s ‘the Reverend Q.C.’, who was treated with two different types of lizard poo:

I…applied to the walls of the left chest  a lotion composed of the excreta of the boa constrictor of the strength of the ninety-sixth part of a grain to half an ounce of water. I commenced treating him with this in the early part of February, and finding that he manifestly improved I directed him to take a tea-spoonful of the same mixture internally three times a day, and subsequently increased the dose to a dessertspoonful. Under this treatment his amendment made rapid progress, until the month of May, when I prescribed for him a solution of the excreta of the monitor niloticus (warning lizard of the Nile) of the strength of the 200th part of a grain in two teaspoonfuls of water three times a day, and directed him to use the same mixture externally.

But my favourite is the case of ‘Miss E.’, described as a ‘public vocalist’, which contains this magnificent paragraph: 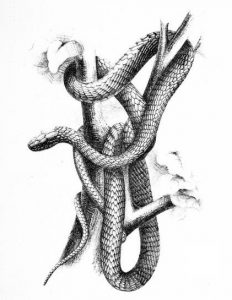 This case is interesting, from the fact that I gave her the excreta of every serpent I have yet examined, and they all, without exception, after a few days’ use, occasioned headache or sickness, with diarrhoea to such an extent that I was obliged to relinquish their use. From the excreta of the lizards she experienced no inconvenience. She is now taking the excreta of the chameleo vulgaris (common chameleon) with great advantage, and is better than she has been at any one period during the last three years.

It’s all pretty ridiculous – a fact which the medical journals did not fail to point out. A review in the British Medical Journal makes an excellent point about evidence, suggesting that the ‘positive’ results he recorded were nothing of the sort:

This doctor, unfortunately, gives his cases—his exempla to prove his thesis; and we must, indeed, announce them as such to be lamentable failures as supporters of his proposition….We verily believe, and we say it most conscientiously, that if Dr. Hastings had rubbed in one-two-hundredth of a grain of cheese-parings, and had administered one-two-hundredth of a grain of chaff, and had treated his patients in other respects the same as he doubtless treated them, he would have obtained equally satisfactory results.

If the BMJ was uncomplimentary, The Lancet was positively scathing. Its reviewer points out that twenty years earlier Dr John Hastings had published another book in which he claimed to be able to cure consumption – using naphtha.  And twelve years after that, he had decided that the cure for consumption was ‘oxalic and fluoric acids’; oh yes, and ‘the bisulphuret of carbon’. Dr Hastings has, in fact, discovered not one but five cures. The reviewer adds, with considerable sarcasm:

As regards that—to ordinary men—unmanageable malady, consumption, all our difficulties are now at an end. The public may fly to Dr. Hastings this time with the fullest confidence that the great specific is in his grasp at last.

But he saved the best till last:

What can the public be thinking about, we would ask, when it supports and patronizes such absurd doings? Will there still continue to be found persons ready to allow their sick friends to be washed with a lotion of serpents’ dung?

Dr Hastings was so offended by this article that he attempted to sue the publisher of The Lancet for libel. The matter was heard before the Lord Chief Justice, Sir Alexander Cockburn, who dismissed the case, ruling that

It might be that [Hastings] had discovered a remedy, and, if so, truth would prevail in the end; but it was not to be wondered at that the matter was treated rather sarcastically when the public were told that phthisis could be cured by the dung of snakes.