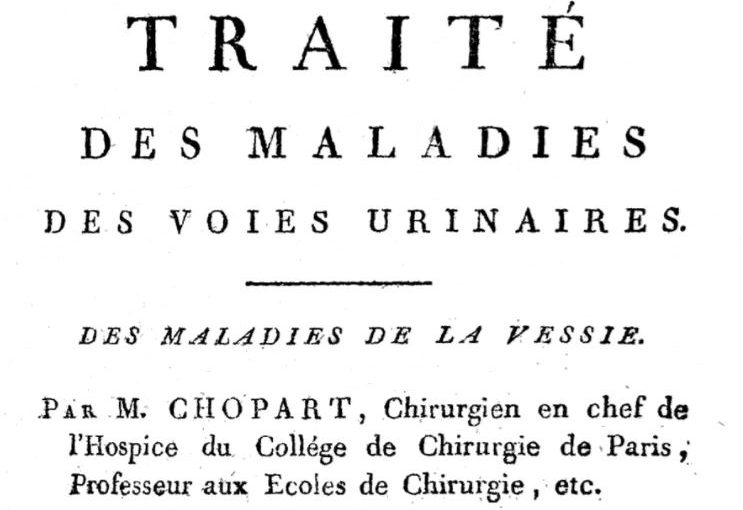 This case sounds so implausible that you may start thinking it’s a spoof. I assure you it’s not: I came across it in Alfred Poulet’s Treatise on Foreign Bodies in Surgical Practice (1880), but it originally appeared almost a century earlier in a book by the French surgeon François Chopart.

Chopart was a pioneer of urology, the treatment of urinary tract disorders, and in the early 1790s published an important early textbook: Traité des maladies des voies urinaires (‘Treatise on maladies of the urinary tract’). Volume II contains this completely extraordinary tale:

Well, that is a little excessive.

Shortly afterward, the ejaculation of semen became rare, and so difficult, that he tired himself for an hour before obtaining it, which threw him into a condition of general convulsions; finally, only a few drops of blood, but no seminal fluid, escaped. He only used the hand to satisfy his dangerous passion until he had reached the age of twenty-six. Being then unable to produce ejaculation by this means, which only brought the penis into a condition of almost constant priapism…

Priapism is a state of persistent erection.

…he thought of tickling the urethral canal with a small stick of wood about six inches long. He introduced it to a greater or less distance without covering it with any fatty or mucilaginous substance capable of diminishing the harsh impression which it made upon such a sensitive part.

‘Mucilaginous’ means ‘moist and sticky’. The point is that he did not use any lubrication. Unwisely, as it turned out.

The occupation of shepherd, which he had adopted, afforded him frequent opportunity of being alone and of easily giving himself up to his passion.

That’s one advantage, I suppose.

At different times he employed a few hours each day in tickling the interior of the urethra with his stick. He made constant use of it for a period of sixteen years, and by this means procured more or less abundant ejaculation. The urethral canal, from the so frequently repeated and long continued friction of this kind, became hard, callous, and absolutely insensible. Galien then found his stick as useless as his hand, and considered himself the most unfortunate of men.

Tormented by ‘continual erections’ and by his ‘insuperable aversion’ to women, he became depressed.

In this condition of melancholia, which affected both his physical and mental condition, the shepherd often allowed his flock to stray; he continually busied himself in seeking some new means of self-gratification. After numerous fruitless attempts, he returned with renewed fury to the use of the hand and the stick of wood, but finding that these measures only stimulated his desires, he became desperate, and drew a dull knife from his pocket, with which he incised the glans along the urethral canal.

I’m wincing. The glans, the tip of the penis, has the highest density of nerve endings in the adult male body.

This incision, which would have caused the most acute pain in another man, only produced in him an agreeable sensation followed by a complete ejaculation.

M. Galien clearly had something very wrong with him.

Enchanted with this new discovery, he resolved to make amends for his enforced abstinence, whenever his fury possessed him. Pits, bushes, and rocks served him as refuges in which to repeat or exercise this new measure, which always procured for him the pleasure and ejaculation which he desired.

So the shepherd had now started using a blunt knife to pleasure himself. What could possibly go wrong?

Having given the utmost possible play to his passion, he finally, after perhaps a thousand trials, divided the penis into two exactly equal parts from the meatus urinarius to that portion of the urethra and corpora cavernosa which is found above the scrotum and near the symphysis pubis.

The ‘meatus’ is the opening of the urinary tract, at the tip of the penis.

Cutting one’s own penis into two equal parts is quite a feat – even if that’s what you were trying to do. Which somehow I doubt was this chap’s intention. But surely this would all result in horrendous loss of blood? Luckily he had this covered:

When profuse haemorrhage occurred, he arrested it by tying a piece of string around the penis, and he tightened the ligature sufficiently to stop the flow of blood without interrupting its course through the corpora cavernosa.

The corpora cavernosa are the masses of spongy tissue which, when filled with blood, produce an erection.

Three or four hours later he unloosened the ligature and left the parts to themselves. The various incisions which he made upon the penis did not extinguish his desires. The corpora cavernosa, though divided, often caused an erection and diverged to the right and left. Dr. Sernin, surgeon-in-chief at the Hotel-Dieu of Narbonne, who communicated this case to me, was a witness of the phenomena of this erection.

Oh my word. Two erections, right and left. Now I’ve heard it all.

Being unable to use his knife any farther, because the section of the penis extended to the pubis, Galien found himself in new distress. He resumed the use of another piece of wood shorter than the first; he introduced it into the remainder of the urethral canal, and tickled, at will, this portion of the canal and the orifices of the ejaculatory duct, thus producing an emission of semen.

He was now inserting a stick through the stump of his penis for sexual pleasure. Without, apparently, stopping for a moment to ask himself what had gone wrong with his life.

This truly extraordinary masturbator amused himself in this manner for the last ten years of his life, without feeling the slightest uneasiness with regard to the division of his penis.

The original French is even better: ‘ce masturbateur vraiment extraordinaire’. A phrase you’d want on your headstone. Or at least in an obituary.

The long-continued practice which he had in the use of this stick rendered him bold and sometimes careless in its use. June 12, 1774, he introduced it so carelessly that it slipped from his fingers and fell into the bladder.

Tormented by these symptoms, he made attempts to rid himself of his cruel enemy. He introduced the handle of a wooden spoon into the rectum more than a hundred times, and forcibly pushed the spoon from behind forward in order to cause the stick to escape the same way that it had entered; but the condition did not yield to the measures which he adopted.

I think it’s fair to say that these ‘measures’ were not terribly sensible ones.

He was finally induced to return to the hospital of Narbonne, in which he had been received three times during a space of two and a half months, and which he always left without experiencing any relief, as he would never consent to an examination in order to determine the cause of his disease. What was the surprise of Dr. Sernin, when, upon examining the hypogastric region of this unfortunate shepherd, who complained of retention of urine, he found two penises, each of which was almost as large as a normal penis.

Well, yes, I imagine that he might have been surprised.

This peculiarity attracted the attention of the surgeon, and although the patient at first assured him that this conformation was congenital, an examination of the parts, of the very apparent cicatrices [scars], and of the callosities along the whole extent of the division, led him to believe that this was not a natural vice of structure. Galien then gave the history of his life, and entered into all the details which we have reported above.

The surgeon used a probe to confirm the presence of a foreign body in the bladder, and then decided to extract it. This would entail making an incision in the perineum, the surface between the scrotum and anus – a procedure similar to that for removing a bladder stone.

The patient, tortured by frightful pains, and not experiencing any relief after taking 100 drops of Sydenham’s anodyne solution, submitted to the operation.

‘Sydenham’s solution’ is laudanum, a tincture of opium in alcohol. It is named after Sir Thomas Sydenham, the great 17th-century medic who popularised the use of laudanum in the treatment of a variety of conditions. The tincture was full of opiates and (usually) effective for pain relief.

The incision having been made, the finger was carried to the foreign body in order to change its direction, and one end was turned toward the wound. The stick was extracted with a polypus forceps.

The patient’s symptoms were relieved, but complications soon set in.

Slight haemorrhage, quiet sleep, the urine escaped without difficulty; on the fifth day a cough, which had tortured the patient for a long time, increased. Fever, irregular chills, relaxation of the bowels, gangrene over the left thigh, buttocks and sacrum. All these symptoms gradually yielded to appropriate treatment.

This sounds like the result of infection, in which case he was lucky to survive. Alas, the ‘truly extraordinary masturbator’ did not much last longer:

The thoracic affection continued, and the unfortunate shepherd died three months after recovery from the operation of perineal section. At the autopsy a considerable collection of greenish pus was found in a sac formed between the pleura and right lung.

This is an empyema, a collection of pus in the space around the lungs. On its own it’s unlikely to have caused his death, but it may well have resulted in sepsis, which would quite rapidly prove fatal.

It’s easy to dismiss M. Galien as a pervert, but he must surely have been suffering from a psychiatric disorder of some kind. The obsessive pursuit of sexual pleasure is variously known as sex addiction or hypersexual disorder, among other terms – but it’s poorly understood and the subject of much disagreement. Evidently his was a particularly extreme case.

2 thoughts on “He sliced his penis in two”