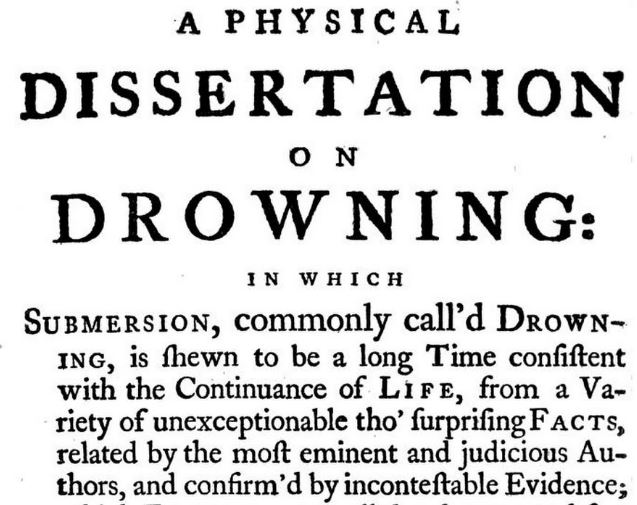 One of the overwhelming priorities of medicine in the eighteenth century was the improvement of resuscitation methods. Drowning was a major cause of death, and physicians realised they needed better emergency procedures to treat those who had fallen into rivers, canals and lakes. Medical societies were set up in several European countries to investigate possible resuscitative techniques. In 1774 the Society for the Recovery of Persons Apparently Drowned was founded in London (it still exists today as the Royal Humane Society).  There was already a considerable literature on the subject – one example is A Physical Dissertation on Drowning, published anonymously in 1746. At the time it was attributed to an author identified only as ‘A Physician’, now known to be the London doctor Rowland Jackson.

Jackson’s aim was to demonstrate that prolonged immersion in water was not necessarily fatal – and that even an apparently lifeless body hauled out of a river might still be resuscitated, given the right emergency care. To prove his point, he scoured the medical literature for examples of those who had recovered after a long time underwater. Though fascinating, to a modern eye they seem somewhat – OK, completely – implausible.

About eighteen years ago, a gardener of Fronningholm, now sixty-five years old, and sufficiently vigorous and robust for a person of that age, made a generous attempt to rescue an unfortunate neighbour who had fallen into the water; but being too foolhardy, he ventured upon the ice, which broke, and let him fall into the river, which at that part was eighteen ells in depth.

An ell was an old unit of length, equal to 45 inches. The river was therefore 67 and a half feet, or slightly more than 20 metres, deep – a considerable depth.

He went perpendicularly to be bottom, in which his feet stuck for sixteen hours before he was found. He himself says, that he was no sooner under water, than he became rigid, and lost not only the power of motion, but also all his senses, except that of hearing, which was affected by the ringing of some bells at Stockholm.

A strange predicament: stuck in a riverbed, listening to the church bells of Stockholm.

He at first, also perceived a kind of bladder before his mouth, which hindered the ingress of the water by that passage though it entered freely into his ears, and produced a dullness of hearing for some time after. This unfortunate man was in vain sought for during sixteen hours, at the end of which time he was taken up by means of an hook fixed in his head, and upon his total recovery said, that he was sensible of that particular part of his fate.

A hook in the head doesn’t sound much fun – but better than drowning, I suppose.

However, whether from the prevailing custom of the country, or the persuasion of particular persons, certain attempts were made in order to restore him to life: for this purpose he was wrapped up in blankets, lest the air entering too precipitately into his lungs should prove fatal to him. In this condition, being gradually warmed by means of sheets, he was rubbed and stimulated till the motion of his blood, which had been checked for so many hours, returned. At last he was totally restored by means of cordials, and anti-apoplectic liquors. He as yet bears the mark of the hook, and says, that he is still subject to violent headaches. This singular accident, attested by the oaths of persons who had been eyewitnesses to it, induced the Queen to give him an annual pension, and he was introduced to the Prince, in order to give an account of what had befallen him.

So it must have happened, right? It seems that the Swedes specialised in this sort of thing, since Jackson goes on to give a second example, which at the time was thought so remarkable that the celebrated scholar Tilasius, librarian to the King of Sweden, signed a declaration that the story was true:

There lately was in Dalia, commonly called Wormsland, a woman of the name of Margaret Larsdotter, who having the misfortune to be thrice drown’d, remain’d the first time, she being then young, for three whole days under water, but the two other times had more speedy relief afforded her. She died in 1672, in the seventy-fifth year of her age.

If you think three days underwater is stretching credibility a bit, you ain’t seen nothing yet.

Some time ago, about four leagues from the town of Falung, a painter fell from a boat into the water in such a manner, as to remain upright with his feet at the bottom. He was in vain searched for during eight days; at the end of which time, he appeared alive on the surface of the water. The magistrate and clergyman of the place, asked him the following questions. Whether he had respired all the time of his submersion? To which he answered, he knew nothing of the matter. Whether he had thought upon God and recommended his soul to him? To which he replied, very often. Whether he could see and hear? To which he answered, yes, and said that he would often have laid hold of the hooks employed in finding him, if he could have moved his arms. He also, added, that the fish proved highly offensive and uneasy to him, by the attacks they made on his eyes; and being asked by what means he guarded against these attacks, he answered, by moving his eye-lids.

These can’t have been particularly fearsome fish, if fluttering the odd eyelash was enough to put them off.

As to his sense of hearing, he affirmed, that nothing was more ungrateful, and even painful, to him than striking the surface of the water; and that in a particular manner, he was affected with a violent pain of his ears, which was forthwith communicated to his whole body, every time people came to draw water in buckets. When he was asked, whether had been sensible of hunger, and discharged his excrements? He replied, that he had not. Being interrogated, whether he had slept? He answered, he knew nothing of it, but believed he had, because he was some time deprived of all sensation and reflection; adding, that all the thoughts he remembered to have passed in his breast, had only God, and the means of his own deliverance, for their objects.

Eight days, you say? A mere amateur, as Dr Jackson goes on to explain:

The celebrated Mr. Burmann assures us, that in Boness of Pithovia…

I have been unable to trace either Boness (the town) or Pithovia (the parish). Indeed, the only references to either in the medical literature are in various retellings of this story, which was first told by the Dutch-German physician Johann Nikolaus Pechlin in his 1676 work De aeris et alimenti defectu et vita sub aquis meditatio – a study of the possibility of sustaining life underwater, in the absence of air or food.

…he heard a funeral sermon preached upon the death of one Laurence Jones, a man of seventy years of age, who as the preacher said, was drowned when sixteen years old; and continued seven weeks under water, notwithstanding which, he returned to life, and enjoyed good health.

However visionary and romantic this accident may appear, in the eyes of those who pretend to have divested their minds of vulgar errors, yet it has met with credit from the most penetrating and sagacious authors who lived at the time in which it happened.

The general point is laudable – don’t dismiss things without thinking carefully about them first. But did somebody really survive seven weeks underwater? I think you can answer that one for yourself.

One thought on “Sleeping with the fishes”