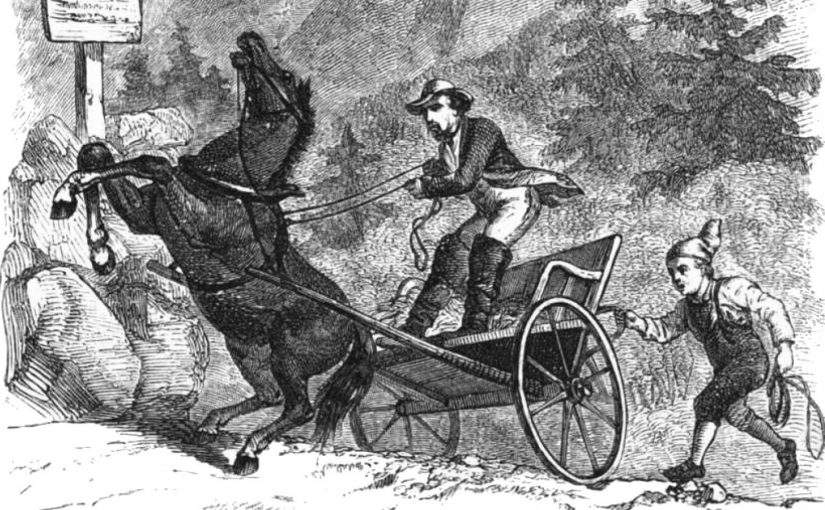 Some time ago I wrote about Thomas Tipple, a Londoner who was impaled by his own carriage in 1812. The shaft of the vehicle passed right through his chest, causing massive injury, but he made a good recovery – even though he received the bare minimum of treatment. Thanks to the exceptional nature of that case, Tipple’s name remained familiar in medical circles for decades afterwards: his skeleton was even preserved in the Hunterian Museum of the Royal College of Surgeons.

Much less well known – but arguably just as extraordinary – is this story published in the Transactions of the Medical Society of the State of Pennsylvania in 1876. It was reported by Dr G.W. Brown, the local physician in Port Carbon, PA. (Rather an unusual name for a town, isn’t it? Unusual, but perfectly logical: it was a coal mining town on a river, so quite literally a port for carbon.)

A boy in a neighboring town, fourteen years of age, during an alarm of fire ran towards it with his head down, in such a way as not to observe a carriage that was being driven towards him at a rapid pace.

It is generally the done thing to run away from raging infernos rather than towards them; but maybe the poor chap feared that his friends or family were in danger.

He ran directly on the point of the shaft (which had become sharpened by use), it striking him about one inch below the nipple on the left side of his chest, passing directly through him, impaling him, and raising him from his feet by the rearing and jumping of the horse…

Sounds pretty bad, doesn’t it? You might think he’d need assistance to get out of this appalling predicament; but somehow he managed to do it himself.

…he swinging on the shaft until he had done so three times, when he seized the shaft in front of him with both hands, and shoved himself off backwards over the point, and thereby released himself from his perilous position.

A feat of which a gymnast would be proud. Imagine trying to do that with a sharp wooden pole stuck through your chest! And amazingly he was still conscious and mobile:

He was enabled to walk home with some assistance. I did not see him for two hours after the occurrence of the accident, he, in the meantime, having had the wound in front dressed by a neighboring physician with adhesive straps, the posterior being left open to secure drainage.

At this date, patients with serious injuries often stood the best chance if the doctor did as little as possible – particularly in rural communities where surgery was barely an option. This patient was, it transpires, particularly fortunate.

There was no cough, and no hemorrhage from the lungs, and but little from the wounds, and, as reaction had come on fully, I concluded no important blood vessels had been injured, and the wounds in the walls of the chest was the extent of the injury we would have to treat.

Very, very lucky. The wooden shaft might easily have punctured the boy’s heart – and it must certainly have passed through a lung.

Taking that view of the case, I gave his friends to understand that he would most likely recover. He was put upon such treatment as would allay pain and counteract inflammation. Considerable effusion took place into the pleural cavity, and a good quantity of pus was discharged from both openings, but it gradually lessened until it ceased entirely.

The pus was an indication of infection, but luckily – in an age before antibiotics – the boy’s immune system fought this off. The doctor concludes by observing that the wound in the boy’s back was the first to close; that in the chest took longer but eventually healed as well. As for the boy – well, remarkably…

…at this time, he is in robust health.

I wish we knew what happened to him afterwards. It sounds as if his recovery was little short of miraculous.

One thought on “Shafted”