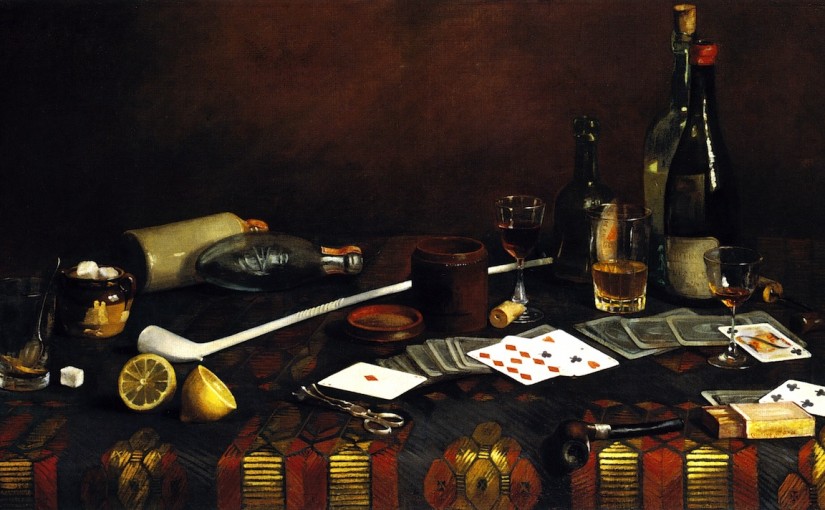 HMS Grampus, a battleship launched in 1802, ended her days as a hospital ship moored off Greenwich.  Between 1816 and 1831, when she was replaced by another retired naval ship – HMS Dreadnought – a steady stream of naval patients was treated on board.  In 1821 the ship was taken over by the Seamen’s Hospital Society, making HMS Grampus the direct ancestor of the modern Hospital for Tropical Diseases in London.

E.F., aged 54, boatswain of His Majesty’s storeship the Weymouth, was admitted on board the Grampus under the following circumstances. The night previously he had been intoxicated. When in this state he was seized with an urgent desire, without the power, to evacuate his urine. To this affection he had been subject for years, after exposure to cold, &c. The catheter, which he kept by him to pass on these occasions, could not be found; and in place of it he passed boldly into his bladder the stem of a common tobacco-pipe.

A commendable bit of improvisation, but in every other respect an unwise move. Not recommended.

The urine flowed freely; but on withdrawing the stem, it broke, leaving a portion in the urethra. There was much pain and swelling in perineo [the region between the scrotum and the anus]; and on placing the finger in the rectum the extremity of the stem was felt projecting into the bladder.

Mr. Thorbum endeavoured to lay hold of the stem with M. Weiss’s forceps, but it was too firmly impacted to be in the least moved. The urethra was opened anterior to the bulb, and by pressure with the finger in ano a portion of the stem, four inches long, was readily disengaged.

The bulb is a structure at the base of the penis, about halfway along the length of the urethra.

The wound in the urethra healed by the first intention; the activity existing in the vessels at the time no doubt contributed to this.  He left the hospital in a week quite well, a large silver sound passing easily into the bladder.

And, one hopes, having learnt his lesson.

One thought on “Pipe dreams”