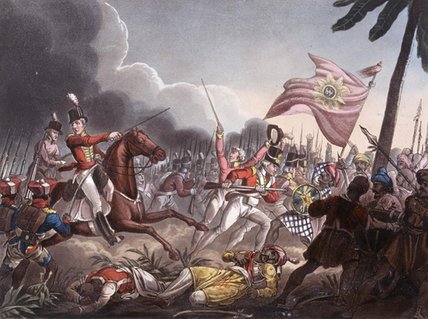 In 1777 a local surgeon wrote to the Medical and Philosophical Commentaries to pass on a story he had heard from a former patient. It concerns an officer in the East India Company who had been injured during the siege of Janna.  I can find no trace of a siege of this name, but the dates suggest it may have taken place in southern India during the First Anglo-Mysore War of 1767-69.

This unnamed soldier was sent out with a division of men to repair a breach in the town’s defences. They carried sandbags and bundles of wood in the hope of patching up the ditch.  It did not go well.

We had a party of 140 grenadiers to cover us, of which only 30 returned. I was myself the first officer that fell. I was stooping to heave a sand-bag into the ditch, when a slug-ball from a gingal piece [a type of heavy musket] in a flanking bastion, entered just above my kidneys, in the left side of my back and lodged amongst the bones under my right arm-pit; it wounded my stomach, went through my lungs, and likewise in a small degree wounded my liver.

It goes without saying that this was a grievous injury. And recovery was not easy:

How I have recovered to what, I am, God knows; but it is to the greatest astonishment of the faculty, who always thought it mortal. And I suppose there is no instance of any one’s recovering of such a wound. I have, at times, discharged from places cut through into my body, a gallon or more matter at once; and as great a quantity of the decoction of myrrh and bark were injected into the wounds, at different times of the day, to keep them clean, and prevent mortification.

But that was not the worst of it. The description that follows reminds me of one of those cartoons in which a character attempts to drink after being peppered with gunshot, and the water comes out of their stomach as if through a colander.

What was injected into my back would come immediately through the wound of my lungs into my mouth, and almost suffocate me. And, some things that I eat passed through the wound of my stomach, in the same state out at my back. In short, to describe what I have gone through, is more than possible, or scarcely to be conceived. I kept my bed eleven long months, and am not yet capable to do duty, as I discharge from my lungs, through my mouth, a great quantity of matter, and sometimes blood.

It should be impossible to survive such a wound; miraculously, he recovered. But some things remained too much for him: the English weather, for one.

However, I have done with the doctors, I hope, and am in a fair way to get a perfect cure. I had thoughts of coming to England; but my cure there would be uncertain, as it is a rainy climate which always affects me in a very sensible degree.