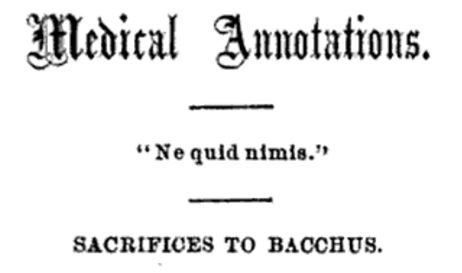 Christmas is always a difficult time of year for practitioners of emergency medicine. In the UK, accident and emergency departments brace themselves for a flood of injuries caused by alcohol; most years there will be at least one newspaper article about drinking culture in the UK and how it is placing intolerable strain on the health service.

It’s always tempting to think today’s problems are unique to the age we live in. An article published in The Lancet in 1869 shows how worried Victorian medics were about the impact of drinking on their seasonal practice:

Thanks to the courtesy of the various house-surgeons, we are able to present our readers with a very interesting record—the number and nature of the accidents due to drink which were treated in the metropolitan hospitals during Boxing day and night. This includes some cases of injury inflicted under the influence of drink, the victim not being intoxicated…. It may be considered that the list fairly represents the amount of serious damage to limb which the festivities of Boxing-day inflicted upon the London population.

Boxing Day, for any readers outside the UK, is what we Brits call December 26th. Interesting that in 1869 it seems to have been the peak drinking day. I suspect it’s much quieter these days: the days immediately before Christmas (and New Year’s Eve) tend to be the worst.

From St. Bartholomew’s Mr. W. D. Butcher, house-surgeon, gives us a list of 46 casualties, 17 of which were severe enough to require admission into the hospital. Out of these in 5 cases the sufferers were not themselves intoxicated, but their injuries were caused by drunken persons. One person under these circumstances got a fracture of the jaw, with cut head and face; another had a wound of brachial artery; whilst “fracture of forearm,” “scald on arms,” and “scalp wound” represent the other three cases.

This sounds like a fairly busy day in the accident department – for the date, at least. Others were quieter:

At Guy’s 13 cases are reported by Mr. C. Sells, one only requiring admission.

The London Hospital admitted 5 cases, and treated as out-patients 21, due to drink. Mr. Butler Ruttledge, the house-surgeon, tells us that the whole number of accidents treated was 100. One female had both bones of leg broken by a drunken husband; another had her lip bitten by a drunken man.

Depressing how one encounters the same brutish stories across centuries of human history.

From St. Thomas’s comes a list of 13 casualties, including “a severe bite of tongue.” Mr. Albert Bell reports 2 cases illustrating the proverbial luck of drunken men. A man was brought in, and found to be uninjured, who had fallen from a hearse; another was struck on the leg by a machine weighing some hundredweights, and escaped with a slight abrasion. These two men “wore too drunk to stand when brought to the hospital.”

There’s no justice, is there?

At University College Hospital Dr. Squarey, resident medical officer, tells us only 5 cases of the kind were treated.

At King’s College, on the other hand, no less than 23 casualties are reported by Mr. A. Napper, house-surgeon, as ” due to drink.”

From the Middlesex Mr. G. E. Norton sends us a list of 9 casualties.

Mr. J. K. Kidd tells us that at Charing-cross 5 such cases were treated.

At St. Mary’s 9 casualties from drink were treated by Mr. J. R. Walker.

At the Westminster 15 such cases were attended by Mr. J. R. Haynes.

From the Great Northern we learn that 4 cases were attended by Mr. P. D. Hopgood, including a serious one of concussion of the brain, produced by a fall from a horse, and a punctured wound from a fall upon a butcher’s knife. The latter would probably have been fatal but that the blade, happily, struck against the first false rib.

The ‘false’ ribs, in the lower part of the ribcage, are false only in that they are not connected directly to the breastbone, but to the cartilage of the seventh rib. This man had a lucky escape.

At the Royal Free 13 casualties are ascribed to drink by Mr. T. C. Murphy, the resident medical officer, who tells us that 3 of these were serious enough to require admission.

The total 181 will probably appear small to those who remarked the number of passengers with unsteady gait who filled our pavements. It includes, however, 38 fractures of various bones, fractures of both bones of the leg very largely preponderating, and broken ribs coming next. There were nine dislocations.  The radial artery in one case, and the brachial in another, were wounded by glass. Cuts, sprains, bruises, and lacerations complete the catalogue of ills resulting from the mirth of Boxing-day.

I wonder how these statistics would compare with today’s figures. Interestingly, the population of Inner London – the area served by the hospitals mentioned in this report – was actually greater in 1869 than it is today. Offices have replaced much of the residential property of the old city centre, and Victorian London was also notoriously overcrowded. But somehow I suspect that the 21st-century hospitals have to deal with more than a couple of hundred drunken casualties on an average Christmas holiday.