Nineteenth-century opinion on the subject of smoking was sharply divided.  On the one hand there were many prominent doctors who condemned the practice as unhealthy, and even suggested that it caused cancers of the mouth; on the other, there were plenty of physicians who believed that smoking eased coughs and other respiratory disorders by promoting the production of mucus.

In 1851 the London Medical Journal came out strongly in favour of smoking as a means of taking medicine – certainly an original method:

The inhalation of various medicines along with the smoke of cigars or cheroots, has been more than once recommended in this journal. In prescribing the method, the physician must take care that the patient be clearly told that the smoke is to be drawn into the lungs; and the mode of doing this must be properly explained to him.

Quite – suck all the health-giving carcinogens into those lungs!

J. H. RICHARDS, of Philadelphia, writes as follows in the Medical 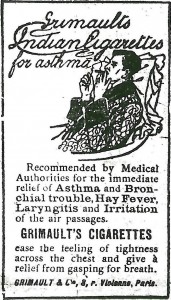 Examiner for June 1851 – “I have been informed by a gentleman of intelligence, who has resided for a long time in China and Manilla, that mercury, which is there regarded as a specific in the severe forms of hepatic disorder incident to the climate (and leading to its employment to an extent that would be considered extravagant by Europeans), is constantly exhibited in the following novel and peculiar manner. The black oxide is introduced into the Manilla cheroots, and, being inhaled, is thus presented in the form of vapour to the most absorbent surface in the body… I mention this fact, as it is interesting in itself, and may suggest other applications of the same principle.”

If you’re going to kill yourself by smoking, you might as well do it even more quickly by smoking mercury, I suppose.

Would this plan be admissible in pneumonia? Perhaps not.

Given that pneumonia is a potentially serious lung infection, ‘perhaps not’ does not begin to cover it.

In syphilis, iritis, peritonitis, etc., we would urge upon our readers to make trial of this method of inhalation. Nothing can be simpler than the manufacture of mercurial cigarettes with the little machine in common use by smokers; mingling the proper quantity of the black oxide, with some light and easily smoked tobacco.

‘Light and easily smoked tobacco’ – as recommended by London’s most eminent physicians.

It is right to state, that the smoking of mercurialised cigars is by no means, as Mr. Richards supposes, a novelty in the practice of medicine. The following formula was given many years ago by Bernard :- “Cigarettes Mercurielles. Bichloride of mercury, 4 centigrammes; extract of opium, 2 centigrammes; tobacco deprived of its nicotine, 2 grammes.” These cigarettes are recommended in syphilitic ulcerations of the throat, mouth, and nose.

Mercury, opium and tobacco!  But that’s just a glimpse of the possibilities.  In 1863 the Canada Lancet gave a list of recipes for other ‘medicinal’ cigarettes.  In addition to the mercury cigarette, they recommended

Nitre Cigarettes.—Dip the paper in a saturated solution of the nitrate of potash before rolling.

Nitrate of potash, also known as saltpetre, is potassium nitrate, a component of gunpowder.  Smoke with due caution.

Balsamic Cigarettes are made by giving the dried nitre cigarettes a coating of tincture of benzoin.

Tinture of benzoin is still sometimes inhaled in steam today, to ease the symptoms of bronchitis, but…!  The article concludes with a list of some of the miraculous cures attributed to medicated cigarettes:

Aphonia.—A patient who could not speak above a whisper for over a year, probably due to a thickened condition of the chordae vocales, as she had no pain or constitutional symptoms, used the mercurial cigarettes for a month, and perfectly recovered.

Offensive Discharges from the Nostrils, with a sense of uneasiness in the frontal sinuses, was quite cured in about a month with the mercurial cigarettes. The patient held his nose after taking a mouthful of the smoke, and then forced it into his nostrils in the manner practised by accomplished smokers.

Polypus in the Nose.—A patient who had been twice operated upon for polypus, is now able to keep the disposition to form fresh polypi in check, by smoking the mercurial cigarette in the same manner, when he feels that uneasiness which warns him of the danger of its recurrence.

Phthisis.—Trousseau long ago recommended a puff or two of an arsenical cigarette twice or three times a day in phthisis.

Smoking while suffering from phthisis (tuberculosis) is perhaps the very worst thing you could do.

When the attention of the profession has been duly aroused to this subject, there will doubtless be found many other affections in which medicated cigarettes may be advantageously employed.

No doubt.  How about lung cancer?

Finally, the Canada Medical Journal for 1863 has an alternative for heavier smokers – sometimes a mere cigarette doesn’t quite hit the spot:

Mr. Davis of this city has prepared medicated cigars with a view of affording to those who are smokers a means of indulging in the weed, at the same time that they can by the same means procure medication. Smoking stramonium, conium, belladonna and other narcotics is no novelty;

Stramonium and belladonna are both highly toxic members of the nightshade family.  Conium is hemlock. All were, however, commonly used in 19th-century medicine in one form or another.

and we find in works on the subject of materia medica mention made of this method of introducing these agents into the system. Those who prefer smoking to swallowing drugs, have thus an opportunity afforded them of indulging their appetite. Each box contains ten cigars, which are well made, and full particulars are given as to the method of using them. They are to be had of all druggists.

Where else would one buy a cigar?

One thought on “Medicated cigarettes: the new panacea”