The English physician Samuel Merriman (1771-1852) was a leading authority on midwifery and the diseases of pregnancy.  His best-known work, published in 1814, was Synopsis of the Various Kinds of Difficult Parturition, a treatise on the dangers of childbirth which was translated into several languages.  In an engaging section on multiple births he includes a couple of wonderful anecdotes.

The first of them is taken from the Menagiana, a volume of witticisms and stories collected posthumously by friends of the great French scholar Gilles Ménage (1613–1692). This is an anecdote told by Ménage himself:

Mr. D told me, the day before yesterday, that the wife of a petty shopkeeper, in his neighbourhood, of the name of Blunet, had borne twenty-one children in seven successive child-bearings.

I thought at first that this might have been a combination of twins, triplets, quadruplets, etc., but no; she had triplets, seven times.

That these triplet children had not only been baptized, but had lived, some several days, others several months, and that twelve of the most robust were still alive, who were all grown up, and in good health. He added, that as doubts might be entertained, whether the husband or the wife contributed the most to produce this kind of prodigy; the man made a further experiment, by seducing a servant girl who lived with them.

An ‘experiment’. I wonder what his wife thought of this selfless dedication to empirical enquiry.

At the end of nine months, she likewise was delivered of three male children, who, notwithstanding their mother’s youth and delicateness, lived a fortnight or three weeks.

Impressive stuff. But Merriman gives a second example which easily tops this:

But this Parisian father of multitudes must be considered as nothing, when compared with the wonderful Russian, who is mentioned in the Gentleman’s Magazine for September 1783. 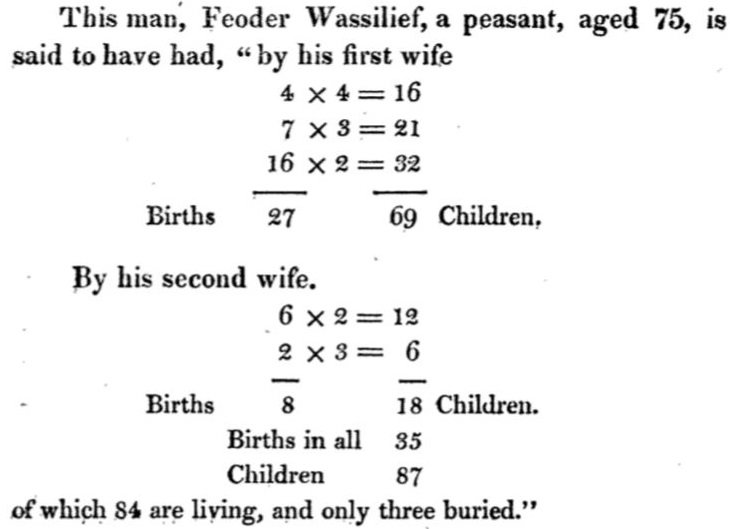 The above relation, however astonishing, may be depended upon, as it came directly from an English merchant at St. Petersburg, to his relation in England, who added that the peasant was to be introduced to the empress.

The above letter is dated Aug. 13, 1782, at which time the man was said “to be alive, and in perfect health, in the government of Moscow.”

Feoder Wassilief (usually Anglicised today as Feodor Vassilyev) and his unfortunate wife still feature in the Guinness Book of Records. However, as this Wikipedia article notes, since their claimed fecundity was never satisfactorily verified, their record should be treated with some caution.

One thought on “The man with 87 children”