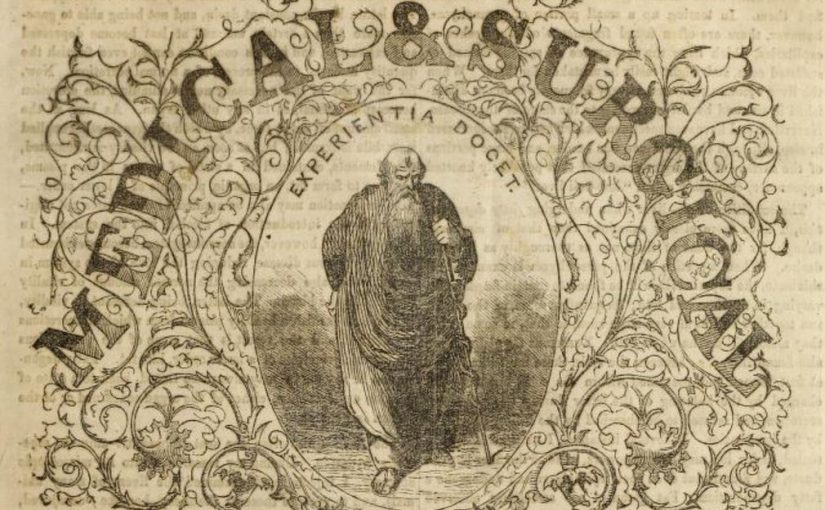 Today’s post is something of a rarity, since it comes from a medical journal which only existed for a year, and was read by a very select group of physicians. The Confederate States Medical and Surgical Journal was published between January 1864 and February 1865, towards the end of the American Civil War. It was a valuable resource for doctors in the Confederate states, many of whom had little access to up-to-date medical scholarship thanks to the embargoes imposed by the Union side. It was also a means for doctors to communicate their cases to each other; and, since the Civil War overshadowed all their work, it is no surprise that a large proportion of the articles dealt with the management of battlefield wounds.

Here’s one example from May 1864. This extraordinary tale of serious injury followed by almost total recovery was noticed far beyond its very limited original readership; in later years it would appear in European textbooks on the kidney and its diseases.

Lieutenant A., 2nd Tennessee infantry, in perfect health, of robust constitution and abstemious habits, was wounded in battle of Shiloh, on April 6th, 1862, by a Minie ball entering immediately below the heart, and passing out through the upper portion of the left kidney.

The Battle of Shiloh, which took place in Tennessee, was a particularly bloody Civil War engagement, with over 3,500 killed and 16,000 wounded. The Minié ball that hit ‘Lieutenant A’, much used in the Civil War, was a type of bullet which offered greatly improved accuracy over previous types.

There was considerable hemorrhage causing excessive prostration. In this condition he was captured by the enemy and removed to Pittsburg Landing on Tennessee river, several miles distant from the battlefield, where he remained for six days without any attention, not even the removal of his bloody clothing, or dressing of his wounds. He was then placed upon a transport and conveyed to Louisville, Kentucky, and sent to hospital for treatment.

This may seem negligent – and may have been – but the army surgeons must have been overwhelmed: each side had more than 8,000 injured men to look after. However, this is a very long time to go without medical attention if a bullet has passed right through your kidney.

During the month of July following, whilst his wounds were still discharging profusely, he was attacked with typhoid fever, and a large abscess formed in the lower part of abdomen, which caused great pain.

He really wasn’t having much luck, was he?

The second or third week in August he was removed from Louisville to Camp Chase, by way of Cincinnati.

Camp Chase was a major Confederate training camp in Columbus, Ohio – some 500 miles away from the battlefield. Undertaking a journey like that in his condition would have been a perilous undertaking.

Several days after his arrival at Camp Chase, very much enervated from the prolonged attack of fever, the abscess above referred to opened outwardly, and discharged an immense quantity of dark sanious [foetid, green] fluid mixed with urine.  This greatly alarmed him, and the extreme mental anxiety added to his fearful nervous prostration, came near proving too formidable for the unfortunate victim, but all of these difficulties were combatted by a good constitution and the inflexible determination of a veteran soldier to such a degree, that when an exchange of prisoners was effected, he was able to proceed to Vicksburg, Miss., where he was released about the first of October.

Vicksburg is 800 miles away from Camp Chase. He covered an extraordinary amount of ground during his convalescence; but he still had another 850 miles to travel!

He commenced his journey homeward, (Lynchburg, Va.,) travelling only during the day, resting at night, suffering much from his wounds and abscess, which still continued to discharge an admixture of unhealthy pus and urine. In about two weeks he reached Knoxville, Tenn., (at which place I was then on duty,) manifesting symptoms of very great nervous prostration. The second day after his arrival at Knoxville I was called to see him, at the house of his sister, at 9 o’clock, A. M., and found him with a severe chill followed by high febrile reaction. On examination I found the anterior wound entirely healed and cicatrized — the posterior wound and abscess very irritable, manifesting no disposition to heal, and both discharging, though not profusely, a thin sanious fluid, mixed with urine.

The fact that he was discharging urine through the exit wound shows that he now had a fistula (anomalous opening) between the kidney or ureter and the skin. Today this would almost certainly be the cue for surgery, but not in 1860s Virginia.

He complained of severe, excruciating pains in lumbar region, passing but little urine through the urethra—secretions generally deranged. I ordered warm stimulating poultices to wound and abscess, and administered one grain of extract of hyoscyamus.

The hyoscyamus or henbanes are a group of toxic plants which include the deadly nightshade. This particular prescription was probably Hyoscyamus niger (black henbane), widely used in traditional medicine, whose many pharmacological effects include mild sedation.

The doctor continued to apply warm dressing to the man’s wound and abscess, and gave him a variety of gentle medicine, including the antifebrile quinine, as well as ‘sponging with stimulating lotions’.

The second or third week in November the wound was almost entirely healed, with but slight discharge, and about the 15th of December he resumed his journey to Lynchburg, and in a short time was entirely restored, with some little impairment of general health. I met Lieutenant A. in October, 1863, in perfect health, with the exception that upon too free exercise or exposure he was annoyed with some uneasiness and pain in the lumbar region.