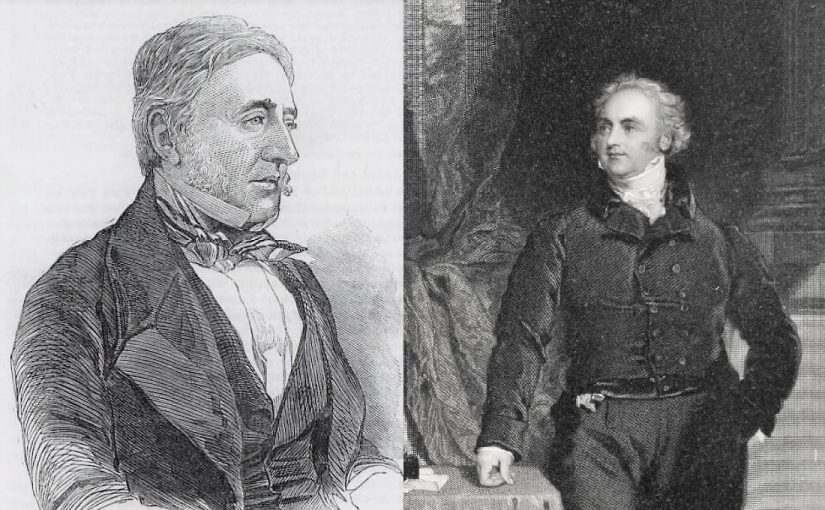 In his textbook The Principles of Surgery (1801) the Scottish surgeon John Bell emphasised the importance of speed when operating to remove bladder stones, condemning

those long and murderous operations, where the surgeon labours for an hour in extracting the stone, to the inevitable destruction of the patient.

That quotation appears as a footnote underneath the dramatic headline of an article published in The Lancet in 1828:

Though not credited in the article, the author was James Lambert, a 28-year-old surgeon with a private practice in Walworth, south London. Lambert was a regular contributor to The Lancet, augmenting his modest clinical income by writing anonymous pieces for the journal. In its early years The Lancet was a waspish, even scurrilous, publication, and many of its articles were viciously satirical. On this occasion, Lambert’s chosen target was a colleague with a famous name: Bransby Cooper.

Unusually for the era, Cooper was known to patients and even his juniors simply as ‘Bransby’ – perhaps to dissociate himself from his uncle Sir Astley Cooper, by some distance the most celebrated surgeon in London. Bransby had served with distinction as an army surgeon during the Napoleonic wars, and on his return to London in 1816 went to live with his uncle. In 1823 Sir Astley appointed his nephew Demonstrator in Anatomy at Guy’s Hospital, without considering other candidates or even consulting his colleagues. The decision proved so controversial that St Thomas’s Hospital, the sister institution of Guy’s, decided to cut all ties with its neighbour.

And Bransby had his enemies. They included Thomas Wakley, the 32-year-old owner and editor of The Lancet. Wakley’s goal was reform of the antiquated medical profession, and two of his particular bugbears were incompetence and nepotism. He believed Bransby to be inept, and knew him to have benefited from his uncle’s patronage. So it was with grim satisfaction that he learned of this operation performed by Bransby, and witnessed by The Lancet’s undercover reporter James Lambert. It was a procedure to remove a bladder stone, known as lithotomy, and in favourable circumstances a competent surgeon could perform it in less than five minutes. This one, however, had taken rather more than an hour (‘Call it an hour,’ Wakley told Lambert; ‘I had rather be under the mark’) and had resulted in the death of the patient. Lambert’s account of the operation dripped with sarcasm:

We should be guilty of injustice towards the singularly gifted operator, as well as to our numerous readers, if we were to omit a ‘full, true, and particular’ account of this case. It will, doubtless, be useful to the country ‘draff’ to learn how things are managed by one of the privileged order—a Hospital Surgeon—nephew and Surgeon, and Surgeon because he is ‘nephew.’

The OED defines ‘draff’ as ‘refuse, dregs…wash or swill given to swine’. The intention here is satirical, and the butt of the joke is Bransby Cooper, a man who – in the view of the writer – had achieved his position only by nepotism.

The performance of this tragedy was nearly as follows:–

Act I. The patient (a labouring man from the county of Sussex, thick set, ruddy and healthy in appearance, and 53 years of age) was placed on the operating table, at a few minutes past 1 o’clock on Tuesday, the 18th. The only one of the surgical staff present, besides the operator, was Mr. Callaway.

Thomas Callaway was Bransby Cooper’s exact contemporary: the two were both appointed assistant surgeon to Guy’s in 1825. Callaway was not exactly celebrated for his surgical skill, and for most of his career at the hospital he was humiliatingly confined to the outpatients’ clinic. But he is said to have had a wonderful bedside manner, and patients loved him. He also had a successful private practice amid the poverty of Borough High Street – making a fortune despite the fact that his fees were famously modest.

The ceremony of binding the patient we need not detail; the straight staff was introduced, and was held by Mr. Callaway.

‘Binding the patient’ was the necessary precaution of tying all four limbs to the table so that the patient would not thrash around during the operation. Twenty years before the first use of anaesthetics, those undergoing lithotomy were likely to be in considerable agony. As for the ‘straight staff’, this was an instrument inserted through the end of the penis and up the urethra until its tip rested inside the bladder. Introduced by another Guy’s surgeon, Charles Aston Key, only a year previously, it was the first significant improvement to the operation since that of William Cheselden a century earlier.

The first incision, through the integuments, appeared to be freely and fairly made; and, after a little dissection, the point of the knife was fixed (apparently) in the groove of the staff, which was now taken hold of, and the knife carried onwards—somewhere.

The surgeon made his first incision in the skin of the perineum, the tissue between the genitals and anus. The purpose of the staff (also known as the ‘director’) was to direct the knife towards and through the prostate gland, which would have to be cut in order to gain access to the bladder.

A small quantity of fluid followed the withdrawal of the knife; the forceps were now handed over, and for some time attempted to be introduced, but without effect.

After cutting the prostate the knife and staff were removed; in theory the surgeon could then insert the forceps and remove the stone, but on this occasion Bransby Cooper had great difficulty in doing so.

“I must enlarge the opening,” said the operator; “give me my uncle’s knife”; this instrument was given, and a cut was made with it, without the staff being reintroduced. The forceps were again used, but as unsuccessfully as before; they were pushed onwards to a considerable distance, and with no small degree of force. “It’s a very deep perineum,” exclaimed the operator. “I can’t reach the bladder with my finger.”

The emphasis is in the original, highlighting what the author believes to be an absurd statement.

Act 2. The staff reintroduced, and a cutting gorget passed along it—various forceps employed: a blunt gorget—a scoop—sounds and staves introduced at the opening in the perineum.

The variety of implements now being used smacks of desperation – the implication is that the surgeon is floundering, out of his depth.

“I really can’t conceive the difficulty—Hush, Hush! Don’t you hear the stone—Dodd,” (turning to the Demonstrator), “have you a long finger? Give me another instrument—Now I have it! Good God! I can hear the stone when I pass the sound from the opening, but the forceps won’t touch it—O dear! O dear!”

The ‘sound’ was a type of probe, an instrument that Cooper was using to locate the stone. Though he could feel it (or at least thought he could) at the end of the probe, he couldn’t get hold of it either with his fingers or the forceps.

Every now and then there was a cry of “Hush” which was succeeded by the stillness of death, broken only by the horrible squash, squash, of the forceps in the perineum.

A horribly vivid description. The patient could take no more.

This act lasted upwards of half an hour; the former upwards of twenty minutes. The stone was eventually laid hold of, and never shall we forget the triumphant manner in which the Assistant-Surgeon raised his arm and flourished the forceps over his head, with the stone in their grasp. The operator turned to the students and said, “I really can’t conceive the cause of the difficulty,” the patient being upon the table, bound, whilst the operator was “explaining.”

And wasting time that might better have been employed in ensuring his patient’s wellbeing, the author implies.

The man was put to bed much exhausted, but rallied a few hours afterwards, and leeches were applied, in consequence of tenderness of the abdomen. He spent a restless night, was in great pain, and was bled from the arm on the following morning. Leeches were applied in the afternoon, and about 7 o’clock in the evening death ended the poor fellow’s sufferings, about twenty-nine hours after the operation.

It sounds a dreadful ordeal for the patient. The following day, two other surgeons (one of them Charles Aston Key, an acknowledged expert in lithotomy) performed an autopsy:

There was a very large and sloughy wound observable in the perineum, and the scrotum was exceedingly dark coloured from ecchymosis.

Ecchymosis is essentially a fancy word for bruising.

The finger could be passed to the prostate without difficulty, which was not deeply situated; indeed, it was the declared opinion of Dr. Hodgkin and Mr. Key that the man had not a “deep perineum.”

The rest of the autopsy report suggests that the kidneys displayed a ‘mottled’ appearance – possibly evidence of pre-existing disease. The prostate was also enlarged, and part of it was obstructing the entrance to the bladder. As for the bladder stone itself, it was ‘rather larger than the disc of a shilling, flat, oval-shaped, and apparently consisting of lithic acid’.

Lambert’s article occupied less than two pages of that week’s edition of The Lancet, but it caused a sensation. Bransby Cooper was outraged by the attack on his professional competence, and he sued. The result was a high-profile libel trial in December 1828, at which many of the most eminent London surgeons gave evidence – most of them, thanks to the influence of Sir Astley Cooper, testifying in favour of young Bransby. The jury eventually found in favour of Bransby Cooper, awarding him £100 – though the damages were far less generous than the four-figure sum his counsel Sir James Scarlett had argued for. There was a general feeling that the jury, while agreeing that Wakley’s article was defamatory, quietly acquiesced in the view that Bransby was not a good surgeon.

But this was a case with no winners. Bransby was mentally scarred by the ordeal: according to his official biography in Plarr’s Lives of the Fellows, ‘throughout the remainder of his life he was unduly emotional.’ Lambert was barred from membership of all the medical and surgical societies; though he returned to his local practice his health deteriorated and he died a short time after the trial. The Lancet survived, but the blow to its reputation was profound – for many years afterwards a sign in the entrance hall of Guy’s Hospital informed medical students that anybody caught writing for The Lancet would be expelled.

4 thoughts on “Libel and lithotomy”