Most people are aware that leeches used to play a major part in medicine: a convenient way of taking a few ounces of blood from a sick patient, they were much used in the days when bleeding was a crucial therapeutic strategy. But where did all those leeches come from?  I’ve previously written about French leech-catchers, who stood in marshes waiting for leeches to attach themselves to their bare legs, but this natural supply eventually ran out, causing a national shortage. In 1854 the Paris correspondent of the New York Daily Times wrote an article for the Boston Medical and Surgical Journal about what became an international leech crisis:

The raising and propagation of leeches has for many years been a necessity in France, for the supply furnished by her marshes gave out thirty years ago. Out of her abundance she used to export; and now she is forced to make up her deficiency from abroad. Other countries have in their turn been exhausted—Italy, Germany and Spain; and of late certain districts of Asia have been laid under contribution. Still, all over the world, the yield has been seriously diminished, and prices have risen to such a point that the poor cannot pay them; and the hospitals even are alarmed.

Disaster! The French Academy of Medicine responded by offering a prize for anybody who could discover a means of farming leeches, and the Prefect of the Seine was given a grant ‘to make experiments with a model Leechery in the suburbs’. 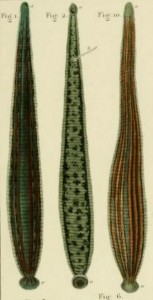 M. Borne has just sent to the Academy an account of his establishment at Rambouillet where he seems to have met with extraordinary success in encouraging the reproduction of his “pupils,” as he calls them. They are fed three times a year; they bury themselves in the earth late in the autumn, and pass the winter in a state of torpor. They mate early in the spring—on St. Valentine’s day, probably—and lay their cocoons in May to hatch in September. The young ones are fed upon the “less substantial blood of calves.” They are extremely voracious, and in two years weigh ten times their primitive volume. M. Borne has built conveniences for the reception of the cocoons, and for their artificial incubation. By care and tenderness he has succeeded thus far in preventing any epidemic or sudden mortality in his reservoirs.

Because we all know that what leeches really need is ‘care and tenderness’.

The leech is very apt to be carried off by sudden disorders, and history mentions the loss of a colony of 18,000 in one winter, of the destruction of 60,000 by a hard frost, and of the consumption of 200,000 in Soloque, by a flock of wild geese. M. Borne has taken extraordinary precautions against any invasion of the sort. In the middle of his ponds is a light-house or lookout, where a man is constantly stationed, armed with guns and other means of defence; the edges of the ponds are guarded in such a way as to keep out all aquatic enemies, such as water-rats, moles and frogs; traps are set for the trochetes, glossiphonies, hydrophiles and dytisques, which nourish a traditional animosity toward all leeches.

Though difficult to identify from their 19th-century French names, these appear to be invertebrates which prey on leeches.

Poachers? It’s not exactly stealing a couple of rabbits for the pot, is it?

In short, M. Borne hopes soon to be in a position to furnish France a supply sufficient to render any further importation useless; and later he expects even to be able to export for his own account.

Hurray! Leeches for everybody.

2 thoughts on “Leeches for everybody”