Here’s a case which wouldn’t surprise a modern medic, but which caused considerable puzzlement when it occurred in the first half of the nineteenth century: a patient who died while being shaved. This tale, first reported in Marryat’s London Metropolitan Magazine, was cited by one Dr Joseph Comstock in a letter to the Boston Medical and Surgical Journal in 1848. The events related must have taken place some decades earlier, however, given the identity of the surgeon involved.

A drunken coal-heaver fell from a waggon, going up Ludgate Hill. He was covered with mud, and appeared to be hurt. I and two others laid him upon a shutter, and took him to St. Bartholomew’s Hospital. He was stripped, and the surgeon examined him, but no injury could be discovered; still he could not rise up in bed.

Here’s where the alarm bells should start ringing for a modern emergency physician. Given the history and the patient’s inability to move, spinal injury must be suspected. At this point the patient should be immobilised to ensure that any injury cannot be exacerbated. Alas, this did not happen.

Mr. Abernethy happened to come in shortly afterwards, when the case was shown to him, but he could make nothing of it.

John Abernethy (1764-1831) was a celebrated and eccentric surgeon who founded the Medical School of St Bartholemew’s Hospital in London. Among other distinctions he is remembered as inventor of the Abernethy biscuit, formulated to prevent digestive disorders. Mr Abernethy examined the patient:

‘Let him,’ said that great surgeon, ‘be washed thoroughly clean, and send for a barber and have that beard taken off, which appears to be of a month’s growth.’ About an hour after this, as I was relating to the surgeon how he fell from the waggon, a message was brought that the man had instantaneously, while he was undergoing the operation of shaving, given up the ghost. We all immediately repaired to the spot, where lay the man, half shaven and quite dead. The barber said he appeared to be well, and was talking to him one instant, and the next was a dead man. ‘I had hold of him,’ said he, by the nose, and did but turn his head very gently to use the razor, when he, without breathing or a sigh, went off.’ 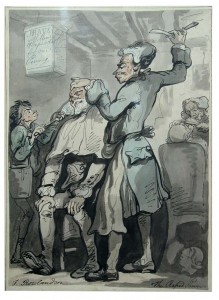 Wouldn’t have happened if he had been in a neck brace. Mr Abernethy, like any good consultant with students in tow, realised this was an excellent teaching opportunity:

Abernethy turned to the young students, and told them this was a case for study, saying, there was a cause for the man’s death; and that the following morning he would open the body and find it out. ‘But,’ added he, ‘think of the case, and before I make the examination, tell me in the morning, each of you, your opinion, what it is that has so suddenly deprived him of his life.’ One of the students said, ‘I think a vertebral bone is fractured, and that as the barber turned his head to shave him, a splinter penetrated the spinal cord.’ ‘You have it,’ cried Abernethy, ‘turn him up, and we will see.’ They immediately cut down the back, and discovered a small piece of fractured bone, not bigger than half a pin, which had penetrated the spine; then taking the corpse by the nose, they observed, as they turned the head one way, the splinter came out, and as they turned it the contrary, it entered the vital cord. The problem of his death was at once solved, and I learnt how little it took to stop the great machine of life in man.

Gold star to the student. But working out how the patient died is only half the point: the real lesson that should have been learned here (and probably wasn’t) is that you must not, under any circumstances, mobilise the neck of a patient with a suspected spinal injury.

One thought on “Killed by shaving”