Volume 6 of the Medical Facts and Observations, published in London in 1795, includes four cases submitted by a Dr Henry Yates Carter, who described himself as “surgeon at Kettley, near Wellington, in Shropshire”.  He was no mere country doctor: he had studied medicine in America and practised on the battlefields of the Revolution before returning to England in 1784. He had evidently saved this case for a special occasion, since the events took place almost twenty years before he finally recorded them:

A Hessian grenadier, aged between thirty and forty years, being one of a detachment sent to reduce a fort on the banks of the Delawar, in the act of levelling his piece, received a ball (grape shot) on that part of the os frontis which forms the external canthus of the eye. The ball making its passage through the head, came out under and rather behind the opposite ear, as in the annexed plate.

Hessians were German soldiers who fought under contract for the British. They played a major role in the American War of Independence; the mention of the Delawar [sic] gives some evidence for thinking that this soldier was injured at the Battle of Trenton in December 1776. The path taken by the shot (from ‘a’ to ‘b’) is quite clear in this illustration: 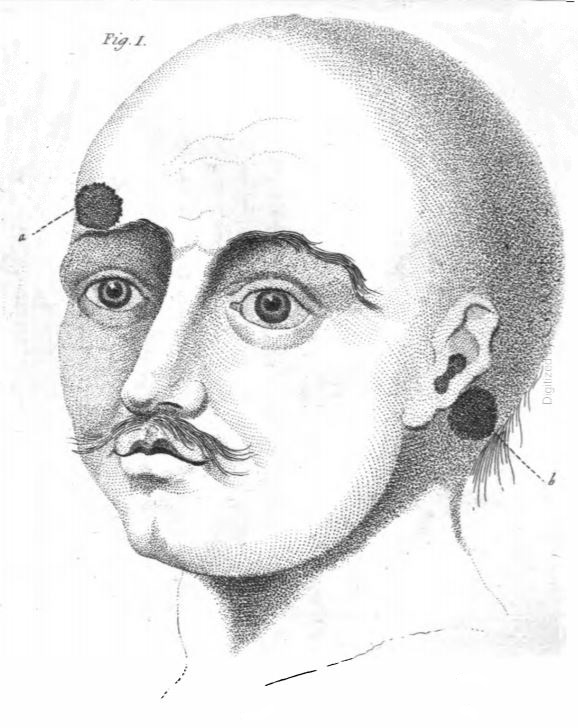 What were the immediate effects upon the receipt of the injury I am not able to say, not being immediately upon the spot; but he appeared, when brought to the regimental hospital, to have a perfect recollection of every circumstance that had occurred to him, except only for a short time after he fell. He complained of little pain, and did not appear to have lost so much blood as might have been expected. The ball being a spent one, had much splintered the cranium, both at its entrance and exit; and was found in the folds of his coat collar.

Much better to find it there than know it is still inside the brain, I suppose.

The wounds being cleansed, and the splinters of bone removed, as far as was practicable, from about the external parts, suitable dressings were applied; and his pulse being full, he was let blood; after which he took twenty-five drops of tincture of opium. The next day he had a sense of heaviness over his eyes, and observed that objects did not appear to him so brilliant as usual; towards the evening he complained of nausea and thirst.

In the circumstances, observing that objects ‘do not appear so brilliant as usual’ seems a mild symptom to have to put up with. Over the next few days the prescribed treatment mainly concentrated on his bowels: he was given regular enemas (known as clysters).

On the third day he complained of pain of his head, accompanied with drowsiness; and, at intervals, of a weakness of his extremities. As the clysters had failed to procure a sufficient discharge of fæces, he was directed to take three grains of calomel and fifteen grains of powder of jalap, which operated well, and procured an alleviation of the symptoms just now mentioned. His eyes were but slightly inflamed, and he complained of but little pain in that on the affected side.

On the sixth day there was ‘a pretty good discharge of matter from the injury’:

Splinters of bone, that had been driven in at the superior wound by the ball, came away from the dependent orifice at almost every dressing (which was twice a day) for several days. The nausea, head-ach, weakness of his limbs, thirst, and every symptom of fever, gradually vanished; the superior orifice filled up with new granulations, and cicatrized firmly; and in about ten weeks there remained nothing more necessary than a superficial dressing to the inferior opening near the ear.

‘cicatrized’ = ‘formed a scar’.  And here’s the amazing thing: the man made a full recovery. Have another look at the engraving and imagine the mess that grape shot must have made in its progress from one side of the head to the other.

I did not see this man after he had actually left off every application to the affected part; but from the condition of the wound, and the patient’s health and vigour, I have not any room to doubt, that in a few days, after I last saw him, he was capable of returning to his duty.

One thought on “In one side and out the other”