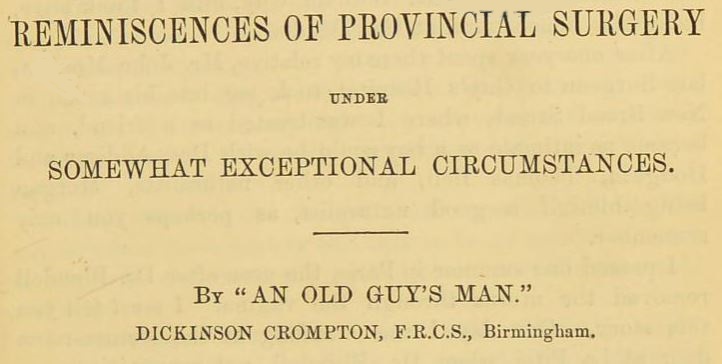 In 1878 an elderly surgeon from Birmingham, Dickinson Crompton, was persuaded to write a short article about his early career for Guy’s Hospital Reports, the house journal of Guy’s Hospital in London.  He was then 73 and almost completely blind, reporting that

I am now getting cataracts in my eyes, and at the present moment do not see what my hand writes, but hope it forms the words my mind would dictate.

We are lucky that he was prevailed upon to record his ‘Reminiscences of provincial surgery’, a vivid account of early 19th-century medical life in the West Midlands. Crompton began his practice in the 1820s, a quarter of a century before the adoption of chloroform (and later ether) – and most of the operations he narrates took place without the benefit of anaesthetics. This includes this astonishing case of a double leg amputation:

A man of intemperate habits, living at Tamworth, lay drunk during a frosty night with his feet in a puddle by the railway. His feet were frozen in the morning, and eventually sloughed off, the integument closing in a conical form, leaving the extremities of the tibia and fibula exposed and carious.

‘Carious’ means ‘decaying’. There’s something shockingly casual about the statement that ‘his feet…eventually sloughed off.’

I heard of the case, and recommended him to be brought to the Birmingham General Hospital. When I saw the case I was astonished at the wonderful effort of nature towards cure. If the bones could have borne ferules like a walking-stick, being placed on them, the man would have been able to walk as well or better than on wooden legs.

Now that would have been a sight worth seeing.

However, that could not be, so the man and I agreed that I should amputate the legs at the usual place, leaving him good stumps and the knees, whereupon to place the common wooden leg. I removed one first, the man sitting on the table and holding the thigh himself and looking on. Not a sound escaped him, but, when done, he said, “By gam!” (a euphemistic expression for one of another sort) “it is sharp.”

By which, it seems, he was describing the keenness of the saw-blade rather than the pain.

After three weeks’ time I removed the other leg in the same manner, except that the man thought the saw did not cut well.

When he was nearly ready to leave his bed he again took me into his consultation as to the inconvenience of the length of the common wooden leg, and asked to have them made only nine inches long, as then, “when he had grog aboard,” he should not have so far to fall!

He lived years after, and was well known as a tramp, I think.

As if attempting to trump his own story, Dickinson Crompton follows that anecdote with one about a patient who showed even more impressive stoicism:

Some years ago I was called in the night to go to Meriden to an accident, prepared to amputate. I found a poor labourer lying on his cottage bed, his left arm hanging over the edge of the bed, dropping blood into a chamber-pot. A tourniquet was tightly placed just below the shoulder-joint; the arm was black, as if already mortified. I heard that the man’s arm had been caught in the cog-wheel of one of the agricultural machines, and was drawn in up to the shoulder.

In the circumstances there was no alternative but to amputate the mangled limb, as close to the shoulder joint as possible.

There was no room for a tourniquet; and I requested Mr. Clark, the surgeon of the village, to press upon the artery against the head of the bone.

The artery in question is the axillary, a major vessel which supplies the arm. Usual practice during amputation was to use a tourniquet to stop the blood and thus prevent major bleeding; since there was not enough space for a tourniquet, they were forced to compress the vessel with a finger.

There was a boy in the room, an apprentice, I was told, but he declined to come near the patient to hold out the arm. I was therefore obliged to hold the artery against the head of the bone with my left hand, while Mr. Clark held the arm out at full length by the hand; but he told me he always “fainted at the sight of blood,” so turning his face and body away as far as possible, he held on till I had made my incision and sawn through the bone as high as I could.

You’d think that fainting at the sight of blood might be a significant handicap to being an early nineteenth-century surgeon; but apparently not.

There was only a cottage candle in the room, and therefore I asked Mr. Clark to hold it, so that I could look for the arteries, but he had had enough. The poor patient was sitting on a chair making no complaint; in fact I think there could not have been much pain felt, from the appearance of the parts, so he himself said, “Sir, if you will give me the candle, I think I can hold it”; this he did, bringing his right hand round with the candle in it, so that I had a good view of the face of the stump.

Holding a candle for a surgeon with one arm, while he rummages around inside the remains of the other, takes some guts.

The man recovered, but I heard he died of phthisis [consumption] six months afterwards; indeed, he was phthisical at the time of the operation.

One thought on “A high pain threshold”