In 1828 The Lancet reported the antics of  a person they called ‘the fire-proof man’, a Cuban with extraordinary abilities:

The French medical journal, La Clinique, gives an account of the experiments of M. Martinez, the fire-proof man, as he is called, who is now one of the principal objects of attraction at Paris. M. Martinez is not, like the celebrated Russian salamander, Chamouni, insensible, for a given period, to the effects of heat; on the contrary, he suffers so much exhaustion from his experiments, that he is only able to repeat them once a week.

Chamouni was a figure of some celebrity, often mentioned in newspapers and thereafter featuring in collections such as The Book of Wonderful Characters (1869).

He assumes the title of “Incombustible”; but after the fate of Chamouni, it may reasonably be doubted whether any man can fairly lay claim to the privilege of being fire-proof. The Russian salamander was remarkable for the simplicity and singleness of his character, as well as for that idiosyncrasy in his constitution, which enabled him, for so many years, not merely to brave the effects of fire, but to take delight in an element where other men find destruction. He was above all artifice, and would often entreat his visitors to melt their own lead, or boil their own mercury, that they might be perfectly satisfied of the gratification he derived from drinking those preparations. He would also present his tongue, in the most obliging manner, to all who wished to pour melted lead upon it, and stamp an impression of their seals. His merit, however, was never sufficiently acknowledged, till he was found dead in the oven which he had so often entered to amuse his visitors, by what he called his grand experiment.

I imagine the coroner at the subsequent inquest had little reason to doubt a verdict of misadventure.

This grand experiment was to enter an oven with a raw leg of mutton, and not to retire from it till the joint was thoroughly baked. Chamouni entered the oven once too often; his ashes were collected, and conveyed to Mojaisk, his native town, where a neat monument has been erected to his memory, and a well written Latin inscription commemorates his fate.

If the Darwin Awards had existed in the days before Darwin, he would surely have been a posthumous recipient

M. Martinez, the French salamander, says La Clinique, was born at the Havana; he is 43 years of age, about five feet high, and appears to be of a robust constitution. He has the complexion and features of a Creole; his nose is flat, and, at present, somewhat disfigured by sores produced by the bursting of a thermometer, which was imprudently carried too near his person, at a late experiment, in order to ascertain the temperature of his body. 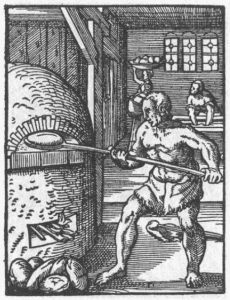 M. Martinez, in his youth, followed the trade of a baker, and from the age of nine or twelve years, was constantly in the habit of exposing himself to very high degrees of heat. Practice has enabled him to bring to perfection a capacity for supporting heat, which seems to be peculiar to persons engaged in the occupation of baking. Tillet gives an account of three girls, servants to a baker, who would remain in an oven heated to a very high temperature, while they swept it, laid the wood, and set the loaves for baking, taking no other precaution than that of keeping the door open. He has ascertained that they remained fourteen or fifteen minutes in the oven, when it was heated to 270° Fahrenheit, ten minutes at 279°, and fifteen minutes at 364°. Thus they supported a degree of heat 67° above that of boiling water, and 170° above that of the human body.

I’m not aware of any recent research on the heat tolerance of bakers compared with other professions, but it might be fun to do some. Albeit completely unethical.

On Tuesday last, M. Martinez, the fire-proof man, exhibited his experiments before a vast concourse of spectators. To obviate all suspicion, an oven was heated in the middle of one of the grass-plats in the garden of Tivoli.

All this walking around in ovens is reminiscent of the Biblical story of Shadrach, Meshach, and Abednego, the three men cast into a burning fiery furnace after refusing to worship King Nebuchadnezzar’s golden idol. According to the account in the Book of Daniel, the furnace was heated to seven times its normal temperature, yet when they emerged ‘the fire had no power, nor was an hair of their head singed, neither were their coats changed, nor the smell of fire had passed on them’. For M. Martinez the outcome of the firewalk was much the same:

First experiment—At twenty-two minutes after eight, M. Martinez entered the oven; the thermometer, which was left in it eleven minutes, indicating 338° Fahrenheit. He remained in the oven fourteen minutes; his pulse, which was at 76 when he entered, beat 130 strokes in a minute when he came out.

Second experiment—At two minutes before nine, his pulse was at 85; he again entered the oven, and remained seven minutes, the thermometer being at 285° Fahrenheit. The crowd of spectators who rushed forward to see him, when he came out, prevented the exact ascertainment of the state of his pulse, but it was less frequent than at the end of the first experiment.

Third experiment——At nine minutes past nine, M. Martinez was placed upon a plank, surrounded with candles, and introduced into the oven, the door of which was then closed. He remained in it three minutes. On coming out his face was of a violet color, but he hummed a tune with great apparent indifference, and plunged himself into a bath of cold water. Before the immersion, his pulse beat 144 strokes in a minute.

I bet his mother was proud.

One thought on “The fire-proof man”