If you enjoy these stories of medical mishaps and surgical drama, why not buy my book? The Mystery of the Exploding Teeth is out now, published by Transworld. The American edition will be published on November 20th.

In 1899 the Atlanta surgeon Dr Kinsman Divine dropped dead while performing an operation. The procedure was nearly complete, and he was putting the final sutures into the incision, when he clutched his chest and said to his assistant “I wish you would take this stitch from me. I feel so bad here.” Before anybody could catch him he collapsed to the floor, and within a minute he was dead. 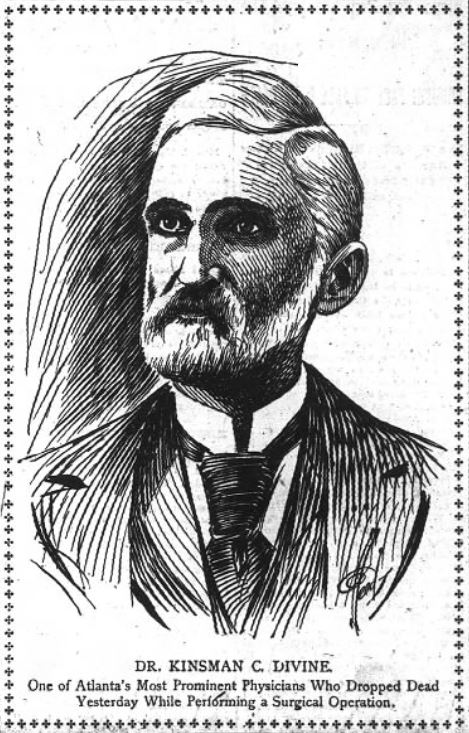 A Civil War veteran, Dr Divine was a prominent figure in Atlanta society. A few years before his sudden death, he contributed this extraordinary case history to the Annual of the Universal Medical Sciences and Analytical Index. It appeared in an article about thoracic surgery by his colleague J. McFadden Gaspon:

Elevators were nothing new in 1891: Atlanta’s first had been installed in the Kimball hotel twenty years earlier. They were hazardous contraptions, though: it could be easy to fall into the shaft, and moving parts were often left dangerously exposed. This was a particularly nasty accident:

There were six lacerated wounds, running longitudinally along the left and anterior portion of the chest, five being through the skin and flesh, about six inches long, and one through the chest-wall about eight inches. The third, fourth, fifth, and sixth ribs were fractured and torn apart, while about an inch of the fourth was lost. Several jagged fragments were removed. A portion of pleura, two by four inches, had been torn away, exposing the pericardium and left lung, the former being penetrated and the latter torn.

Catastrophic injuries. The pleura, the sac around each lung, is a crucial structure. So is the pericardium, since it surrounds and protects the heart. A simple puncture wound to its membrane can easily prove fatal.

The lung finally collapsed completely, and no air seemed to enter it for three or four weeks, but gradually returned.

The collapse of the lung – known as pneumothorax – was inevitable. When a wound damages the pleura and air gets into the chest cavity, it becomes impossible for the lung to inflate properly, with potentially serious consequences.

The lacerations to the chest wall were so serious that the surgeon could only attempt a rough-and-ready repair by placing a few sutures. The cavity of the wound was packed with antiseptic gauze, and the surface was dusted with antiseptic powder and dressed. A bandage was then placed tightly around the chest in the hope of supporting the patient’s breathing.

The small complaint made by the patient and the slight shock experienced, although there was extreme pallor, were very notable in this case.

Notable and surprising, given the scale of his injuries.

Subsequently the chest cavity was filled with a dirty serum, which was evacuated by turning the patient onto his left side. Irrigation with a warm solution of boracic acid was used every day, and when the discharge became purulent the peroxide of hydrogen was employed.

The ‘dirty serum’ was an early sign of infection. By this date it was well known that antiseptic measures were of crucial importance in such cases, and some of the materials the surgeon used would not be out of place in the modern operating theatre: iodoform gauze is still widely used for packing wounds. He and the nursing staff evidently did a wonderful job, since their patient made a stunning recovery:

Two points of necrosed ribs were excised, after which the wound healed, the lung was restored, and without lateral curvature.

The article is accompanied by an engraving of the patient, which leaves little doubt about the scale and seriousness of his injury. 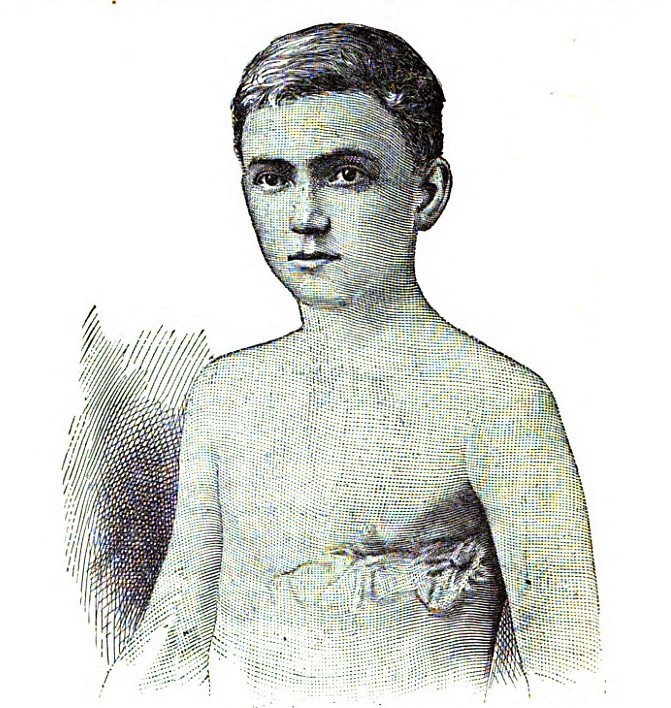 One thought on “Divine’s intervention”