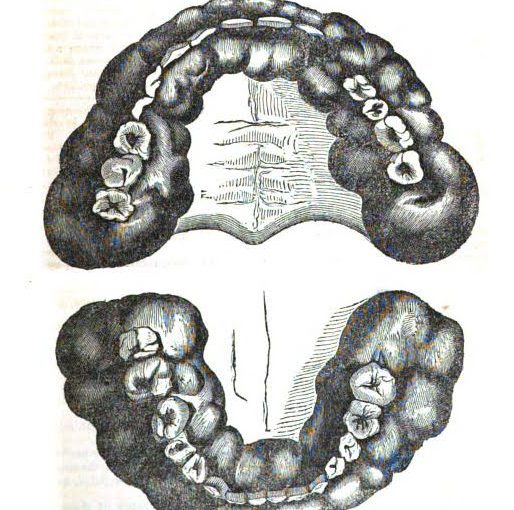 One interesting aspect of nineteenth-century medicine is the fact that many clinicians were convinced that every ailment could be traced ultimately to the same cause. Some were sure that most illnesses were triggered by problems with the liver; others that a disordered digestion could manifest in symptoms all over the body.  Towards the end of the century, French physicians became obsessed with the nervous system, believing that everything from heart disease to metabolic disorders was in essence a ‘nervous’ condition.

Another example of such monomania is the dental surgeon Leonard Koecker, who was – unusually for the time – a qualified physician as well as a dentist. His influential textbook Principles of Dental Surgery, published in 1826, put many noses out of joint. It begins uncompromisingly:

It may be assumed as a fact, that there is no branch of the healing art, so little founded on scientific principles as that of Dental Surgery.

Koecker goes on to castigate the dentists of Germany, France, England and America for their inadequacies, adding for good measure:

I do not hesitate in the least to assert it as my sincere opinion that Dental Surgery, in the manner in which it is practised at present, is really a great positive evil.

It must be said that he had a point. Many of those practising as dentists at this date had little formal training or knowledge of physiology. Much of his advice was straightforward and sensible, such as his insistence that artificial teeth should only be implanted once the underlying disease had been treated. Nevertheless, he had a few idiosyncrasies – one was his belief that poor dental health was the underlying cause of a wide range of unrelated conditions. In an article published in The Medico-chirurgical Review in 1843 he explains how he cured one patient of gout, and restored another’s hearing, by extracting their decay-riddled teeth. But perhaps the most implausible of these cases is this one:

Mrs. S , was requested by Mr. Lawrence, in March 1840, to consult me about her teeth, giving it as his opinion that her sufferings were principally produced by the diseased condition of her mouth. The patient was 69 years of age, and although delicate and nervous, did not particularly suffer in her general health, but for the last ten or twelve years had been gradually losing her sight, so that she had for some years required a constant guide, and had now become almost totally blind.

Dr Koecker does not attempt to explain how tooth decay might result in blindness.

On a minute examination I found her mouth in a most diseased and disgusting condition. The gums were much swollen, of a red and livid appearance, and, together with the alveolar processes, in a state of much inflammation and suppuration.

The alveolar process is the ridge of bone which contains the tooth sockets.

Seven or eight dead roots and stumps were remaining in different parts of both the upper and under jaws, intermixed with 11 apparently healthy teeth, to which latter were fastened in different places four small sets of artificial teeth, of one to four teeth each, mounted on gold, and both constructed and inserted in the most injudicious and unskilful manner, so that some of the teeth, to which the sets were attached, had now become denuded of the gums and had been retained, probably for years, in their positions only by the gold fastenings of the artificial teeth. The artificial teeth had not been removed from their places for six or seven years, and had become, along with the natural teeth and roots, incrusted with a mass of tartar to such an extent that it was difficult to distinguish the one from the other.

It sounds pretty disgusting. Horsehair toothbrushes were in use at this date, but I suspect this patient did not even employ this basic measure.

Some of the roots and teeth were still retained firmly in their sockets, but the greater part were very loose In order to obtain a precise view of the case, it was necessary first to remove all the sets of artificial teeth, which proved to be a difficult task; I was obliged to scale off in the most careful manner the greater part of the incrusting tartar before I could accomplish this. Having succeeded however in doing so, I found it unavoidably necessary to extract every remaining root and tooth, not one of them being in such a state as to render the preservation possible.

The unpleasantness of this procedure can barely be imagined. The dentist pulled eleven healthy teeth, and then had to carve out the roots of another eight – all in an age before anaesthetics.

After the restoration of perfect health to every part of the mouth, the lady was provided with a properly-constructed set of artificial teeth, which fulfilled every desired effect; and I am happy to state that she has gradually so far recovered her sight that she requires no guide, and her general health has ever since so much improved, that now, at the age of seventy, she enjoys better health than for the last ten years.

Good for her. But somehow I doubt that her teeth had anything to do with it.

3 thoughts on “The dentist who made the blind see”