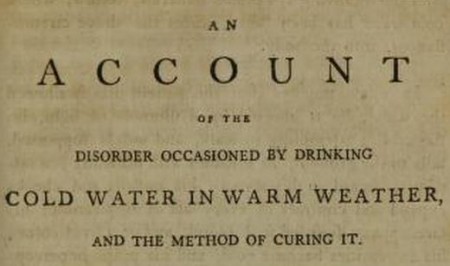 It used to be thought dangerous to give a hot horse cold water; when I first heard this canard as a schoolboy I remember my informant telling me gravely that cold water kills horses instantly.  Not having much to do with horses, it has taken me thirty years to discover that few, if any, equine deaths are attributed to overly chilled drinking water.  (For the record, vets do suggest that extremely cold water is a bad idea – but only because horses are less likely to drink it in the quantities they need when the weather is hot).

A strikingly similar urban legend appears to have done the rounds in Pennsylvania in the late 18th century. The first volume of Benjamin Rush’s Medical Inquiries and Observations (1789) offers stern advice to the populace of Philadelphia: drinking cold water can kill.

Few summers elapse in Philadelphia, in which there are not instances of many persons being affected by drinking cold water. In some seasons four or five persons have died suddenly from this cause, in one day.

This mortality falls chiefly upon the labouring part of the community, who seek to allay their thirst by drinking the water from the pumps in the streets, and who are too impatient, or too ignorant, to use the necessary precautions for preventing its morbid or deadly effects upon them. These accidents seldom happen, except when the mercury rises above 85° in Farenheit’s thermometer.

Dr Rush offers some piercing analysis concerning the causes of this phenomenon:

Three circumstances generally concur to produce disease or death from drinking cold water. 1. The patient is extremely warm. 2. The water is extremely cold. And, 3. A large quantity of it is taken into the body: The danger from drinking the cold water is always in proportion to the degrees of combination which occur in the three circumstances that have been mentioned.

He also describes the symptoms of the cold-water malaise: 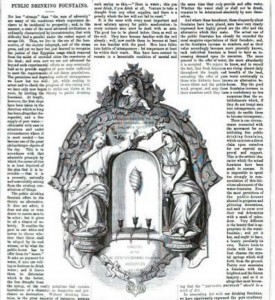 In a few minutes after the patient has swallowed the water, he is affected by a dimness of sight, he staggers in attempting to walk, and unless supported, falls to the ground; he breathes with difficulty; a rattling is heard in his throat; his nostrils and cheeks expand and contract in every act of respiration; his face appears suffused with blood, and of a livid color; his extremities become cold, and his pulse imperceptible; and unless relief is speedily obtained, the disorder terminates in death, in four or five minutes.

Nor is it just water which causes the condition.

It may not be improper to take notice, that punch, beer, and even toddy, when drank under the same circumstances as cold water, have all been known to produce the same morbid and fatal effects.

Dr Rush recommends laudanum as the only ‘certain remedy’ for this disease.  But even after the patient has been saved, caution is in order:

Care should be taken in every case of disease, or apparent death, from drinking cold water, to prevent the patient’s suffering from being surrounded, or even attended by too many people.

Finally, Dr Rush has a few tips for those eager to avoid sudden death by water: 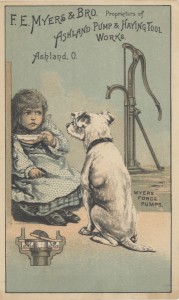 If neither the voice of reason, nor the fatal examples of those who have perished from this cause, are sufficient to produce restraint in drinking a large quantity of cold liquors, when the body is preternaturally heated, then let me advise to

1. Grasp the vessel, out of which you are about to drink, for a minute or longer with both your hands. This will abstract a portion of heat from the body, and impart it at the same time to the cold liquor, provided the vessel is made of metal, glass, or earth; for heat follows the same laws, in many instances, in passing through bodies, with regard to its relative velocity, which we observe to take place in electricity.

2. If you are not furnished with a cup, and are obliged to drink by bringing your mouth in contact with the stream which issues from a pump, or a spring, always wash your hands and face previously to your drinking, with a little of the cold water. By receiving the shock of the water first upon those parts of the body, a portion of its heat is conveyed away, and the vital parts are thereby defended from the action of the cold.

Although it is plausible that a malnourished labourer with heatstroke (and, say, a heart condition) might drop dead after drinking a large amount of cold water, it strains credulity to suggest that four or five a day might do so.  How are we to explain the phenomenon?  My best guess is that there were only a few such deaths, which Philadelphia rumour turned into an epidemic.  Feel free to suggest alternatives in the comments.

2 thoughts on “Death by cold water”