Recovering from the annual excess of mince pies and roast potatoes, I was amused to come across this passage from an important work published in 1829, Sir Robert Christison’s A Treatise on Poisons.  Christison was one of the founders of nephrology, the branch of medicine devoted to the study of the kidneys, but was also influential in the fields of pharmacology and medical jurisprudence. He was one of the leading authorities on poisons, and his expertise proved valuable not just to other physicians but in the legal sphere: before accurate chemical analysis was available, distinguishing natural deaths from deliberate acts of poisoning required great skill and knowledge.

In his chapter on ‘irritant’ poisons, Christison is careful to give some examples of fatal conditions which might be mistaken for death by poisoning. He suggests that one of them is simple overeating:

Mere distension of the stomach from excessive gluttony may cause sudden death. Generally indeed the symptoms and appearances in the dead body show that death is the consequence of apoplexy; but sometimes not… Excessive distension of the stomach, then, sometimes causes sudden death by inducing apoplexy, which is commonly of the congestive kind,—that is, without rupture of vessels.

Christison gives an example taken from the work of a French physician, a Dr Mérat:

A man in good health, while greedily devouring an excellent dinner, became suddenly blue and bloated in the face; a clammy sweat broke out over his body; and he died almost immediately. On dissection the stomach was found enormously distended with food, and the vessels of the brain were so gorged, that the brain appeared too large to be contained within the skull.

You think that’s bad; wait till you read the next one: 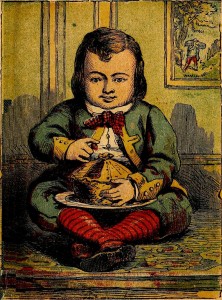 Sir Everard Home relates the case of a child, who, being left by its nurse beside an apple-pye, was found dead a few minutes afterwards, and in whose body no appearance of note could be discovered, except enormous distension of the stomach with the pye.

Parents of small children can rest assured that this is an isolated case: it is safe to leave a child next to an apple pie. Safe for the child, that is.

Christison’s final example is taken from one of the first books about the legal aspects of medicine, by a German doctor, Herr Wildberg:

A corpulent gentleman died suddenly fifteen minutes after dinner; and as he lived on bad terms with his wife, a suspicion arose that he had been poisoned. His wife said that he fell asleep immediately after dinner; but had not slept many seconds, when he suddenly awoke in great anguish, called out for fresh air, exclaimed he was dying, and actually expired before his physician, who was instantly sent for, could arrive. Wildberg found the stomach so enormously distended with ham, pickles, and cabbage-soup, that, when the belly was laid open, nothing could be seen at first but the stomach and colon. Some white powder was found on the villous coat of the stomach, and it was at first suspected to be arsenic; but it proved on analysis to be merely magnesia, which the gentleman had been in the habit of taking frequently.

Magnesia (as in milk of magnesia) has long been used to treat indigestion. A malady which frequently afflicts those accustomed to gorging themselves on ham and cabbage soup.

There was not any particular congestion in the brain. Wildberg very properly ascribed death to simple over-distension of the stomach.—In all such cases the symptoms may be suspicious; but when carefully considered they can hardly be said to resemble closely the effects of irritant poisoning; and at all events the appearances in the dead body will at once distinguish them.

Thankfully the moment for excessive consumption of chocolate and Christmas pudding has now passed. I might stick to salad for the time being.

One thought on “Dead from too much pie”