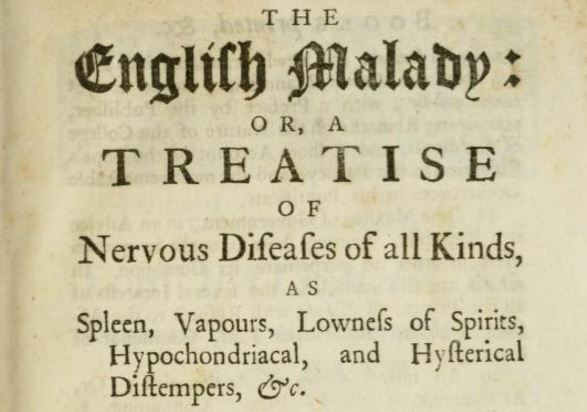 In 1733 a book about depression and mental health was published in Dublin: The English Malady; or, A Treatise of Nervous Diseases of All Kinds, as Spleen, Vapours, Lowness of Spirits, Hypochondriacal and Hysterical Distemper. The author, George Cheyne – born a Scot, though he moved to London – was convinced that the English were uniquely prone to depressive illness, as he explains in his preface:

The Title I have chosen for this Treatise, is a Reproach universally thrown on this Island by Foreigners, and all our Neighbours on the Continent, by whom Nervous Distempers, Spleen, Vapours, and Lowness of Spirits, are, in Derision, call’d the ENGLISH MALADY. And I wish there were not so good grounds for this Reflection. The Moisture of our Air, the Variableness of our Weather, (from our Situation amidst the Ocean) the Rankness and Fertility of our Soil, the Richness and Heaviness of our Food, the Wealth and Abundance of the Inhabitants (from their universal Trade), the Inactivity and sedentary Occupations of the better Sort (among whom this Evil mostly rages) and the Humour of living in great, populous, and consequently unhealthy Towns, have brought forth a Class and Set of Distempers, with atrocious and frightful Symptoms, scarce known to our Ancestors, and never rising to such fatal Heights, nor afflicting such Numbers in any other known Nation.

Every generation seems to bemoan an ‘epidemic’ of depressive illness; the sad truth is that it’s always among us. Cheyne knew a thing or two about ‘inactivity and sedentary Occupations’. As a young man his unhealthy lifestyle caused his weight to balloon to 32 stone. He adopted a vegetable diet, with dramatic effects: he became an early and influential proponent of vegetarianism.

The English Malady contains a number of colourful case studies, including the curious tale of Colonel Townshend:

Colonel Townshend, a gentleman of excellent natural parts, and of great honour and integrity, had for many years been afflicted with a nephritick [kidney] complaint, attended with constant vomitings, which had made his life painful and miserable. During the whole time of his illness, he had observed the strictest regimen, living on the softest vegetables and lightest animal foods, drinking ass’s milk daily, even in the camp: and for common drink Bristol water, which, the summer before his death, he had drunk on the spot.

Bristol water was the mineral water issuing from the spring at Jacob’s Well, a short walk from where I grew up. Colonel Townshend’s health continued to decline, and he travelled to Bath where he was visited by George Cheyne and a local physician, Dr Baynard. One morning he called for the two doctors and his apothecary, Mr Skrine. The colonel was preparing for his death and had written a will.

He told us, he had sent for us to give him some account of an odd sensation he had for some time observed and felt in himself: which was, that composing himself, he could die or expire when he pleased, and yet by an effort or somehow, he could come to life again: which it seems he had sometimes tried before he had sent for us.

The doctors were surprised and very much wanted the colonel to demonstrate, but thought it unwise to request him to do so. Luckily there was no need: the old soldier insisted on showing them his trick.

We all three felt his pulse first: it was distinct, though small and thready: and his heart had its usual beating. He composed himself on his back, and lay in a still posture some time: while I held his right hand, Dr. Baynard laid his hand on his heart and Mr. Skrine held a clean looking-glass to his mouth. I found his pulse gradually, till at last I could not feel any, by the most exact and nice touch. Dr. Baynard could not feel the least motion of his heart, nor Mr. Skrine the least soil of breath on the bright mirror he held to his mouth; then each of us by turns examined his arm, heart, and breath, but could not by the nicest scrutiny discover the least symptom of life in him. We reasoned a long time about this odd appearance as well as we could, and all of us judging it inexplicable and unaccountable, and finding he still continued in that condition, we began to conclude that he had indeed carried the experiment too far, and at last were satisfied he was actually dead, and were just ready to leave him.

The doctors were leaving the room, half an hour after the apparent death of their patient, when something dramatic happened:

As we were going away, we observed some motion about the body, and, upon examination, found the pulse and the motion of his heart gradually returning: he began to breathe gently and speak softly: we were all astonished to the last degree at this unexpected change, and after some further conversation with him, and among ourselves, we went away fully satisfied as to all the particulars of this fact, but confounded and puzzled, and not able to form any rational scheme that might account for it.

This strange performance was, it seems, merely a rehearsal for the main event.

He afterwards called for his attorney, added a codicil to his will, settled legacies on his servants, received the sacrament, and calmly and composedly expired about five or six o’clock that evening.

4 thoughts on “Dead or alive at will”