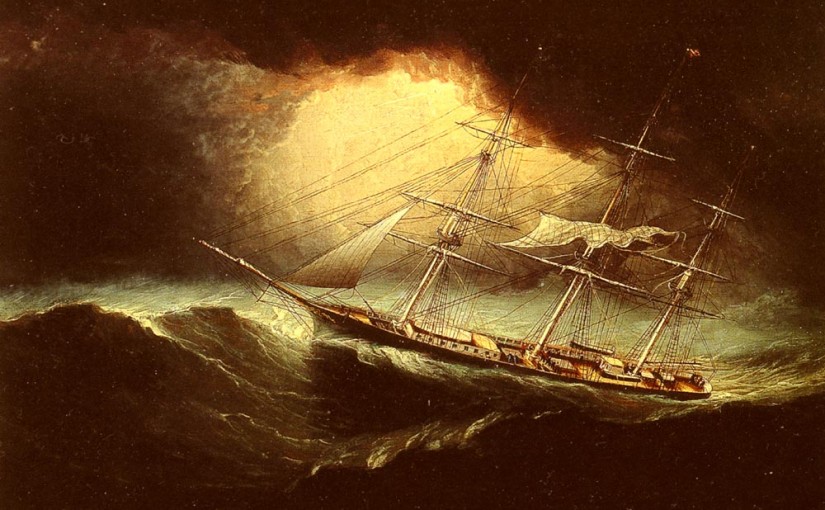 On April 16th 1828 a ship called the New York sailed from its eponymous home port destined for Liverpool. She carried a full complement of passengers and cargo and – as reported in the Edinburgh Philosophical Journal shortly afterwards,

on the morning of the 19th, was struck by lightning, which shattered the main royal mast, and, gliding down the iron chain main-top-sail tie, burst the iron bands on the mainmast head.

The electricity was conducted through a series of metal pipes and attachments right through the ship, demolishing the walls of the store room and removing several planks from the hull as it went.

Many other parts of the ship, not in the direct line of its passage, were also shattered, apparently from the effects of a lateral explosion; several doors and partitions were thrown down, a large mirror in the cabin was shivered into small fragments, and a pianoforte was thrown down, its top blown off, and broken in pieces. The loudness of the explosion was appalling, and spread universal consternation.

That must have been some lightning bolt.

A sulphureous smoke, which had issued with a bluish flame from the hatches, filled the cabins, and at first inspired alarm, lest the cargo in the hold, consisting chiefly of cotton and turpentine, had taken fire; but, on clearing the main hatch, it was soon ascertained that no danger from fire existed. The ship, however, had sprung a leak, which made four inches of water every hour, but which, on working the pumps, was found to be under command, and would not prevent her proceeding on her voyage to England.

Surprisingly, none of the passengers sustained any injury. Rather the opposite, in fact:

A remarkable effect was, however, produced on an elderly gentleman, who for the last five years had not been able to walk half-a-mile at a time; terrified by the crash, he forgot his debility, and, springing from his bed, rushed on deck with singular quickness and agility. He has retained, ever since the event, the power over the muscles of his limbs, derived from this sudden motion.

Rather belatedly, the captain thought it might be an idea to erect his lightning conductor, which for some reason he had omitted to do earlier.

The wisdom of adopting this precaution was soon apparent, for, in the course of the same morning, the ship was struck by a second explosion, which is stated by the unanimous testimony of all on board to have far exceeded in violence the first. It melted a great part of the conductor, producing a vivid combustion of many of the links, which burned like so many tapers; and, descending into the sea, darted off to a considerable distance along the surface of the waves. The resistance to its passage was so great, as to cause the ship to recoil with a sudden and violent shock, so as to throw down several of the crew. The melted iron of the conductor fell in large drops on the deck, which, although already strewed with hailstones that had previously fallen, intermixed with rain, was set fire to in many places by the ignited metal.

No damage, however, was done to the masts or rigging, nor the least injury to any of the crew, with the exception of a carpenter, who being at work with an iron auger in his hand, received a smart shock through the wrists, which occasioned a livid tumour which was still visible six weeks after the accident…. Every instrument made of steel, such as the carpenter’s tools, and the knives and forks, and also those made of soft iron, even to the very nails in every part of the ship, has been rendered permanently magnetic. All the watches and chronometers were either stopped or rendered useless, by the magnetism imparted to the balance-wheels and other parts of their works that were made of steel.

So, a few clocks and watches damaged beyond repair – but a paralysed passenger cured by a lightning bolt. Not a bad outcome, on the whole.

2 thoughts on “Cured by a lightning bolt”