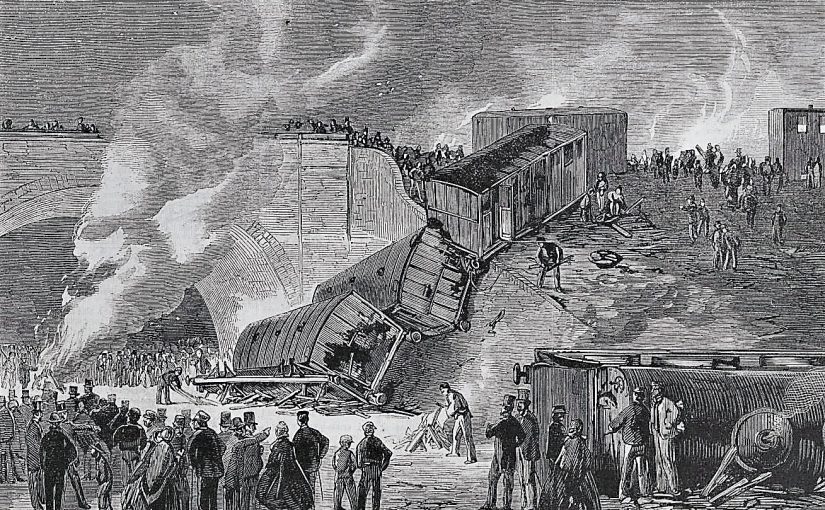 Serious rail accidents have become such rare events that it’s easy to forget just how dangerous the railways were in Victorian Britain. Between 1840 and 1900 there was not a single year without a death on the rail network. In 1873 alone there were 15 fatal accidents – more than one a month – and the following year three major catastrophes (and a host of smaller collisions) contributed to a death toll of 80. For decades the newspapers fulminated about this appalling safety record, yet little progress was made until after the turn of the century.

One particularly awful incident occurred at Long Eaton, Derbyshire, in October 1869, when a mail train collided with a special service taking day-trippers to the Nottingham Goose Fair, killing seven passengers. It transpired at the ensuing inquest that the Midland railway company had scheduled far more trains than was wise, on a dark and foggy evening when it was difficult for drivers to see the track ahead. Calls for improvements to signalling and safer timetabling went unheeded – and a few weeks later something very similar happened, and on the same stretch of track.

On November 17th an express travelling from Derby to Manchester crashed into the back of a ballast train which had broken down just outside Long Eaton. Twenty navvies sitting at the rear of the ballast train were able to jump clear just before the express locomotive ploughed through it, cutting their carriage to matchwood. Miraculously, nobody was seriously injured. Rather the opposite, in fact. The incident prompted a rather peculiar letter to the Times from a correspondent who preferred to remain anonymous:

Sir, allow me to confirm all that your two correspondents have related with respect to the alarming collision on the 17th inst. on the Midland line.

Two earlier letters had given eyewitness accounts of the scene, and called for the railway company to be punished for its ‘grossest neglect’.

Nothing needs to be added either to their descriptions of the circumstance or to their just condemnation of the reckless negligence which brought us so near to death; but the shock produced so curious an effect on myself — an effect, perhaps, unparalleled in the history of railway accidents — that you will, perhaps, excuse my troubling you with the details.

And unparalleled in the history of medical science, as it transpires.

At my hotel in Manchester on Tuesday night I was seized with all the symptoms of a violent attack of rheumatic fever.

Unless you live in a developing country, it’s quite likely that you’ve never met anybody who’s suffered from rheumatic fever. But in nineteenth-century Britain it was a problem of epidemic proportions. One of its commonest complications was endocarditis, so that tens of thousands of people – many of them children – suffered from agonising heart problems. Improved public hygiene, and the evolution of the pathogen causing the disease, have virtually eliminated rheumatic fever in the West, though it remains a big problem in other parts of the world.

In fact, my condition so alarmed me, and my dread of a sojourn in a Manchester hotel bed for two or three months was so great, that I resolved to make a bold sortie, and, well wrapped up, start for London by the 3.30 p.m. Midland fast train from the London Road terminus. From the time of leaving that station to the time of the collision, my heart was going at express speed; my weak body was in a profuse perspiration; flashes of pain announced that the muscular fibres were under the tyrannical control of rheumatism, and I was almost beside myself with toothache.

These symptoms are, it must be said, quite vague.

Crash! smash! bump! and bang! and from side to side of the carriage I went like a billiard ball under a hard cushion hit. The compartment was soon seen to be sprinkled with the blood of a hapless victim whose face had come into crushing contact with his vis-à-vis, and whose nerves will, I fear, from what I subsequently observed of his condition, suffer for some time in consequence.

‘vis-à-vis’ is an old term meaning ‘the person sitting opposite’. The florid nature of the gentleman’s prose makes me wonder whether he was a professional writer – or at least a writer manqué.

As soon as I thought it prudent I alighted and rendered what aid was considered necessary, and although the condition of the atmosphere was such as, under other circumstances, would probably have produced the worst results on a frame shaken and debilitated by the strong fever lurking in my veins…

By which he means it was dank and foggy.

…it is remarkable that from the moment of the collision to the present hour no ache, pain, sweat, or tremor has troubled me in the slightest degree, and, instead of being, as I expected, and, indeed, intended, in bed, drinking tinct. Aurantii…

Tinctura Aurantii: tincture of orange peel. According to the 1872 edition of Pereira’s Elements of Materia Medica this was ‘an agreeable stomachic, and is principally employed as a flavouring adjunct to decoctions and infusions’. In other words, it tasted nice but didn’t do much.

…or absorbing through my pores oil of horse-chestnut, I am conscientiously bound to be at my office bodily sound, but mentally reminded that the curative power of a trip by the Midland line is by no means guaranteed by my experience.

Evidently seeing himself as something of a comedian, the unnamed correspondent concludes his letter with a joke every bit as laboured as we have come to expect from Victorians (Dickens apart, of course):

By-the-by, Sir, don’t print my name or address, or the Midland Railway Company may come down upon me for compensation.

I am, Sir, your obedient servant,

The case was later cited in several articles and books about the influence of the imagination on the human body, a subject that fascinated nineteenth-century physiologists. They believed that the rheumatic fever had been cured by the mental excitement that followed the collision. I suspect the real explanation is more prosaic: either Mr L.R. was suffering from nothing more serious than a slight cold, or he was a bit of a hypochondriac. Either way, the article stands as a rare example of a nineteenth-century passenger cured, rather than killed, by a railway accident.