The ‘foreign correspondence’ pages of one 1861 issue of the Medical Times contain an eclectic selection of stories. The first concerns the ‘sucking apparatus of infants’ (i.e., babies’ mouths). But the following case was the one that caught my eye – headlined Foreign Body in the Transverse Colon:

A very curious case of this affection occurred a short time ago in the bagno of Brest.

The term bagno (sometimes bagne) was used in southern European countries to describe a prison whose inmates were made to perform hard labour.

A dangerous convict, who had already once escaped from prison, suddenly complained of abdominal pain, constipation, sickness, fever, etc. No hernia could be found, but the symptoms, which soon increased in severity, left no doubt of the existence of an internal incarceration of the bowel.

The doctor suspected that a loop of intestine had become trapped. This was potentially very serious: if its blood supply had been cut off the tissue would quickly die, resulting in gangrene.

The vomiting became obstinate, the pain very intense, and the meteorism considerable.

Meteorism (also known as tympanites) is a condition in which the abdomen becomes tight and distended. It is caused by a build-up of gas in the intestinal tract – a classic symptom of bowel necrosis.

As the patient, in spite of treatment, continued to grow worse, he confided at last to his medical attendant, that he had placed a little leathern bag with money, in the rectum, in order to hide it from the gaoler. An examination of the rectum was then made, but nothing was found in it.

The prisoner was not, it transpired, being entirely truthful. Yes, he had stuck something up his bottom – but not a purse.

The symptoms continually increased, and after a time a tumour became visible at the left side of the abdomen, corresponding to the site of the colon descendens [descending colon]. The convict, at this stage of the disease, said that he had introduced an étui of wood into the rectum…

étui = “A small ornamental case for holding needles, cosmetics, and other articles.” [OED]

…and having been surprised, he had, in the hurry, placed it with the top upwards, instead of with the bottom.

The implication being that this needle-case was not symmetrical. One end was apparently easier to get a grip on than the other. A week after the onset of symptoms the prisoner died, and a post-mortem was carried out. The surgeon who performed it found that the patient had suffered acute peritonitis; the bowel was ‘immensely distended by gas’.  But the strangest finding was in the transverse colon, where

a voluminous foreign body was found, which proved to be a cylindrico-conical box, the conical end of which looked towards the caecum. The box consisted of two pieces of sheet-iron, was about 6 inches long and 5 inches broad, weighed nearly 22 ounces, and was covered by a piece of skin, no doubt for protecting the mucous membrane of the rectum from the contact with the metal, and for facilitating the expulsion of the box.

This was a seriously large object to be stuck up anybody’s bottom. When the medics opened the box they found it contained the following:

A complete escape kit, in other words. 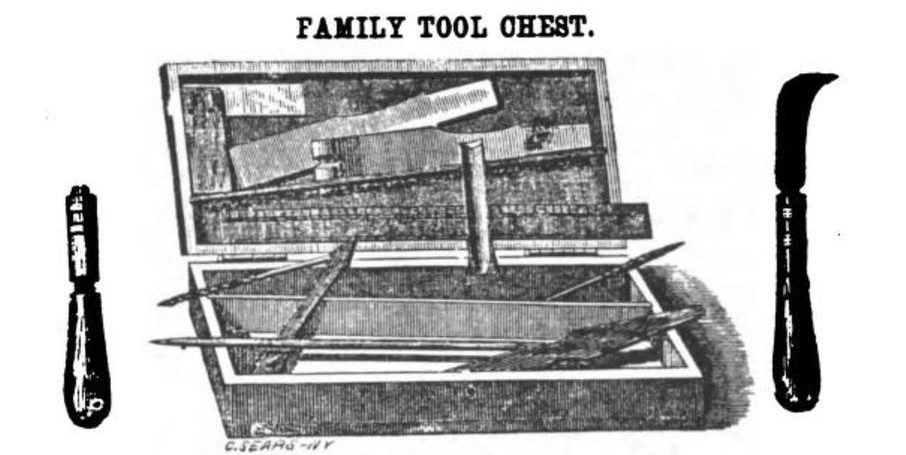 After this extraordinary discovery had been made, an inquiry was instituted into the habits of the galley-slaves, and the chief gaoler said, that convicts of the worst description used to conceal suspicious objects, as instruments, money, etc., in the rectum.

These items, however, were generally of small size, being scarcely ever larger than an inch or so, and they were called ‘necessaries’ by the convicts.

Today’s ‘necessaries’ include the smallest mobile phone on the market, an item familiar to any prison officer who has ever had to conduct an internal cavity search.

The gaoler had never seen one similar to the box just described.

I should think not!

These étui have almost always the same shape, one extremity being conical and the other blunt. They are always introduced in such manner that the conical end looks towards the anus, whereby the expulsion of it is facilitated. In the present instance the convict had been obliged to conceal his necessaire in a hurry on the approach of a person, and confounded [confused] the ends of the étui.

Instead of sitting just inside the rectum, where it could be easily removed when nobody was looking, the box had escaped from the prisoner’s grasp and made its way a surprising distance into the large intestine.

My advice? If you’re planning to break out of prison, just get a friend to bake a file inside a cake.