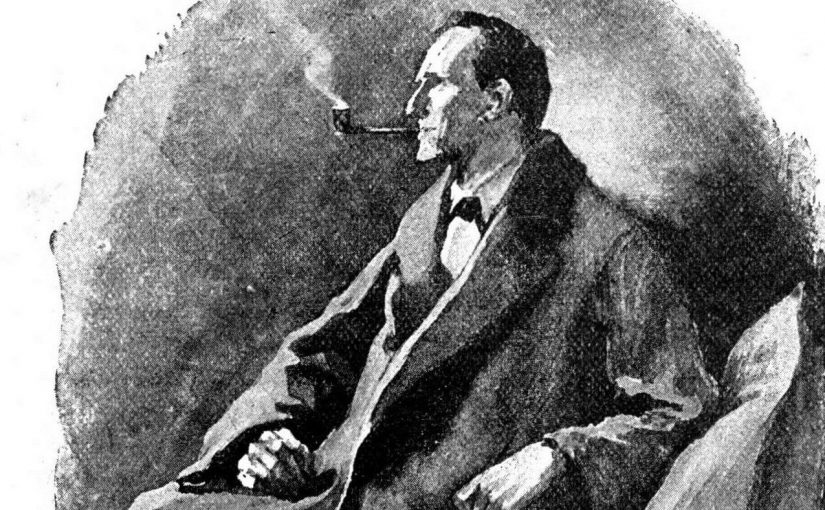 When I first read this case I found myself thinking that it would not be out of place in a Sherlock Holmes story. Happily this is no coincidence – Holmes’s creator Sir Arthur Conan Doyle is very likely to have been familiar with it. It first appeared in an article in the Edinburgh Surgical Journal in 1875:

The author, Joseph Bell, had a particular interest in forensic medicine. He taught at the University of Edinburgh, where Conan Doyle arrived as a medical student in 1876. They first met the following year, and Conan Doyle so admired Bell’s logical brain and keen observational skills that he later credited him as the inspiration for his famous literary sleuth.

And indeed those talents are clearly in evidence in this case from his practice, concerning an Irish patient called Dolan:

M.D., aged 24, a healthy-looking, ruddy Irishman, was brought into my ward on 21st March 1874, almost helpless from intoxication. He exhibited several wounds on his throat, none of them deeper than the skin and cellular tissue. The chief one, beginning with a sharply-defined edge just below the right ear, extended downwards and forwards opposite the thyroid cartilage across the middle line.

The main injury began with a sharply-defined edge just below the right ear, and extended downwards towards the Adam’s apple. A second, smaller cut ran in parallel below it.

On my first sight of the patient, before asking him any questions, I expressed my opinion, from the look of the wounds, the lie of their edges, that they exactly resembled an attempt at suicide by a left-handed man, as the only likely way of explaining their shape, structure, edges, etc., was the supposition that they had been inflicted from right to left, and in direction downwards but across the neck. The patient at once stated that he was a lefthanded man.

Intrigued, the doctor asked how he was injured; had this been a suicide attempt? Not at all:

The patient had been in company with another man, Ison, who was jealous of the patient’s intimacy with his wife; this man had drunk with Dolan till he was helplessly drunk; had then got him to sit down on a bench beside him; and had, in a pretended outburst of affection, passed his left hand, in which was a large clasp-knife, round Dolan’s neck from the left, and then cut his throat with a rapid whirl of the knife from right to left.

What a charmer. But wait, it gets worse.

Then, thinking Dolan was done for, he had instantly got up, seized a little child, and, with the same knife, nearly severed its head from its body; and lastly, with such rapidity that those in the room were unable to prevent him, cut his own throat in the most effectual manner, dying in a few minutes. The extraordinary coincidence was found in the fact that Ison also was a left-handed man. Now, it will be easily seen that had Ison succeeded in enticing Dolan into a lonely room, nothing could have been easier for him than, having cut Dolan’s throat satisfactorily, to have also killed the child, and, escaping himself, left Dolan with the credit of murder and suicide.

One mystery remained. How had this murderer, who was easily able to kill the child and himself with a sharp knife, failed so completely to kill Dolan, who by his own admission was rolling drunk?

This was puzzling at first, till we obtained a handsome strong silk neckerchief which Dolan wore that night, and which was hacked through its many folds, but had been sufficient to save the man’s life.

Lucky man – but the mystery, and its resolution, are worthy of a Holmes story.  As for the patient: he, at least, escaped with his life.

Dolan made a very rapid and complete recovery, leaving hospital within three weeks after his admission.

2 thoughts on “A case for Dr Bell”