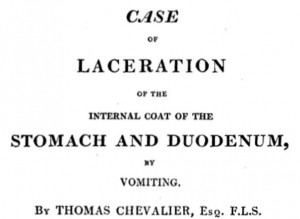 If you haven’t yet bought everything for your Christmas dinner, this tale from almost 200 years ago may cause you to remove a few items from your shopping list.  Published in the Medico-Chirurgical Transactions in 1814 by Thomas Chevalier, a distinguished surgeon and polymath also notable for his English translation of Pascal’s Pensées, it concerns a teenage boy who purportedly ate himself to death on Christmas Day.

Master Froome, aged 14, went out on Saturday, 25th of Dec. 1813, to a Christmas feast, ate heartily and drank rather freely of gin and water; on the evening of the following day he became sick, and vomited violently. The vomiting continued, at intervals, during the whole of that night, and the following morning. He went out, however, for a short time, but felt very ill; and said to one of his companions, that his blood was boiling at his heart, and that he thought he should die; and begged he would come to his funeral, if it were so.

It’s a shame there is no further information given about Master Froome or his family – we do not know anything about his background, whether he was a schoolboy or already working.  The fact of his being allowed to drink ‘freely of gin’ at lunch suggests that he was not from a particularly wealthy family.

He soon returned home, and about 2 o’clock on Monday afternoon, he became short breathed, unable to swallow, and felt great anxiety, with almost continued efforts to vomit. These symptoms increased till the following day, when my friend Mr. Lightfoot of Oxford Street saw him, and thinking his situation dangerous, desired that I might be sent for.

Mr Chevalier found his patient flushed in the face and breathing with difficulty. His pulse was irregular, and his extremities had become cold.  He was also experiencing heart palpitations.

His attempts to vomit were frequent and most distressing, and generally terminated in the discharge of white froth. When he attempted to drink, the effort to swallow was accompanied by a violent and agonizing spasm of the pharynx, which made him dash the cup from his hand. Pressure on the region of the stomach, particularly towards the right side, occasioned him a great increase of pain and an immediate recurrence of the efforts to vomit. Towards the evening he vomited in successive efforts near two pints of blood; after this he became easier, and said he should like to eat something; toasted bread was given him, of which he ate two pieces rather eagerly, but the vomiting speedily returning, he threw up what he had eaten, and soon after this a quantity of something which he said was so bitter it was enough to kill him. Almost immediately after this he expired.

The following morning a post mortem was carried out.

The heart and every thing connected with it appeared entirely in a natural state. The viscera of the abdomen also appeared to be healthy externally, but in laying open the stomach and duodenum the internal coat of both appeared to be torn in various places. These lacerations were much larger in the duodenum than in the stomach…Two extensive lacerations were also found near the middle of this portion of the intestine. All the remainder of the intestinal tube, and also the whole of the oesophagus, and all the rest of the abdominal viscera, were perfectly free from any morbid appearance.

Perhaps unwilling to reach any unwarranted conclusions, Mr Chevalier’s case report comes to an end without suggesting what might have killed the boy. The title of his article implies that it was the persistent vomiting which resulted in rupture of the stomach.  This seems unlikely after little more than 24 hours.  If his gin-drinking was not simply a seasonal aberration but an established habit, it’s possible that this was what had damaged his stomach lining beyond repair.

So – have a very happy Christmas.  But not too much gin.