Browsing an 1869 edition of The Lancet I stumbled across a short news article with this promising headline:

A cutting from an American paper gives us an account of a remarkable operation for umbilical hernia, in which the operator, Dr. G. D. Beebe, found it necessary to cut away between four and five feet of sphacelated small intestine.

‘Sphacelated’ is 19th-century medic-speak for ‘gangrenous’. I had no idea that any surgeon would have attempted to remove part of the intestinal tract as early as 1869. Alas, The Lancet has few details of the operation. The article ends on a note of barely-concealed transatlantic condescension:

Dr. Beebe certainly deserves great credit for his boldness and skill, though we fail on this side of the globe to appreciate the necessity for giving surgical details in a daily paper, and especially with the following “sensational” heading, occupying four separate lines of the boldest type:—

“A new Surgical Operation. The recent successful achievement of Dr. G. D. Beebe. The removal of nearly five feet of human intestine. How it was done”!

Here’s the offending report from the Chicago Tribune:

Probably the most astounding surgical operation ever performed on the American continent has recently been made in this city by Dr. G. D. Beebe. The circumstances, as we gather them from the husband of the patient, are briefly these : Mrs. J. B. Childs, residing at Lee Center, Ill., came to this city on a visit, and was stopping on Sangammon street. While there she became aware that an old rupture, from which she had suffered from time to time for several years, was likely to give her trouble and summoned medical aid.

‘Rupture’ means a hernia. Mrs Childs was suffering from an umbilical hernia, in which a portion of the intestines protrudes through a weakness in the abdominal wall at the navel. 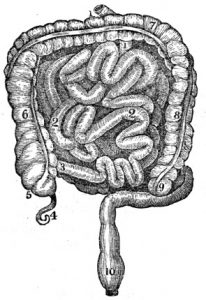 The physician first called regarded it a case of “wind colic,” but his treatment not relieving the suffering of the unfortunate woman, he was dismissed and Dr. L. Dodge was summoned, who, recognizing the true state of the case, requested that a surgeon be called. A careful examination of the case revealed the fact that the intestine involved in the rupture had already mortified, and to allow this to remain would inevitably destroy the woman’s life. He, therefore, decided to remove so much of the intestine as had undergone decomposition, and, by securing the extremities of the sound intestine, to restore at length the natural passage and thus preserve the unfortunate lady’s life. Assisted by Drs. L. Hodge, J. S. Mitchell, and A. Q. Beebe, this dangerous and difficult operation was accordingly performed, and four feet six inches of the intestine were removed from the patient’s body, and may now be seen, preserved in alcohol, in Dr. Beebe’s office.

This supposedly ‘sensational’ report in fact understates quite what an amazing operation this was. I eventually found a more detailed description of the procedure in a rival newspaper, the Chicago Post, which makes clear that Dr Beebe actually performed three separate operations:

The Dr. freed a portion of the intestine and followed it back in each direction to the hernial ring, as one would find the two ends of a string held in the hand by the middle, and found that the parts involved in the decay was four feet and ten inches in length. To return it to the cavity of the abdomen would have been fatal; to remove it would, almost of necessity, have been equally so, but as the latter included the only chance of life, Dr. Beebe applied the knife, brought the severed ends of the intestines to its margin and there secured them by suture; and through the ring as an artificial exit, the stercoraceous matter of the patient was discharged.

‘Stercoraceous’ is a rather wonderful archaic word meaning ‘faecal’.  To clarify: Dr Beebe created a stoma, an artificial opening in the abdominal wall, and having cut out the gangrenous intestine attached the healthy upper section to the stoma. Faecal matter was expelled through this artificial anus, presumably into a bag or other receptacle. The procedure is known as an ileostomy – this was perhaps the first in medical history.

After the expiration of three weeks, the constitutional disturbance consequent upon the first operation having subsided, Dr. Beebe proceeded to unite the severed ends of the intestines by means of a highly ingenious and, as the result proved, an effective contrivance, the description of which our unprofessional readers would not understand…

The ‘effective contrivance’ was an instrument called Dupuytren’s enterotome, which was used to sever the ileostomy, before the two healthy ends of the small intestine were sutured together.

…after which, he, on August 6th, closed the artificial opening in the wall of the abdomen which the hernia had caused, and all the natural excretionary functions of the body of the patient were restored.

Amazing. It seems that rumours were flying around about how successful this operation had really been: the Boston Medical and Surgical Journal claimed that the woman had died four days after the operation. In the summer of 1870 Dr Beebe felt the need to set the record straight. He did so, strangely, at a meeting of the American Institute of Homeopathy:

I now present a pathological specimen, resulting from an operation in the case of hernia. This case has already been referred to so frequently by the public press, and by the medical journals of the country, that it is due, inasmuch as there have been so many mis-statements disseminated, that I should say that, having removed about five feet of intestine from the opening, I closed the artificial anus, the patient went to her home in the central part of this State, and completed her term of pregnancy. She was delivered in December of a healthy female child, and has since continued in good health, nursing her child. It has been stated that the patient died thus and so, in various ways and times since the operation; but, a few days since, I heard from the patient, and she is still in the enjoyment of good health.

This sequence of operations – excision of an intestinal section, ileostomy followed by ileostomy reversal – is widely performed today for cases of bowel disease or injury. Was Dr Beebe the first to do so? If you know of an earlier example please do let me know.

Postscript: Since writing this post I’ve had a look at the history books. Most authors credit a German surgeon, Baum, with performing the first ileostomy in 1879, a full decade after this operation took place. His patient lived only a few days. Has Dr Beebe been robbed of priority? And if so, why? As far as I can establish, he never reported the operation in a medical journal, which may explain why historians have not taken his claim seriously. Or it may simply have gone unnoticed. If the accounts above are accurate his operation certainly deserves to be remembered.

3 thoughts on “Amputating the bowels”