Occasionally a single operation is deemed so impressive that it goes down in history under the name of the surgeon who performed it. In 1817 the English surgeon Sir Astley Cooper astonished his colleagues by tying a ligature around the abdominal aorta, the largest blood vessel of the abdomen, to treat a patient with an aneurysm of the iliac artery. For many years afterwards medical journals referred to ‘Sir Astley Cooper’s Operation’ – not to describe the procedure in general, but that one operation on a specific patient.

The year after Sir Astley Cooper’s feat, medics across Europe thrilled to news of another heroic surgical intervention. Accounts were printed in all the major journals, headlined simply ‘Richerand’s Operation’. And when you read it you’ll understand why it was deemed worthy of this eponym. Baron Balthasar Anthelme Richerand was a prominent Parisian surgeon; this case report was published in 1818 in The Medico-Chirurgical Journal:

M. Michelleau, a health officer of Nemours, was affected, during three years, with a cancerous tumour over the region of the heart, which was extirpated in the month of January, 1818; but a bleeding fungus was frequently reproduced, notwithstanding the application of cauteries and caustics.

Not a fungus in the modern sense, but an unwanted growth. The measures applied in the first attempts to check it were cautery (burning with a hot implement) and caustics (corrosive chemicals such as silver nitrate, which is still sometimes used to stop minor bleeding).

He now came to Paris and M. Richerand found an enormous fungus rising from the wound, and discharging a reddish and horribly foetid sanies.

Yet the patient did not suffer much pain. He had neither colliquative sweats, nor diarrhoea; and although troubled with a chronic cough, his age and general state of health presented nothing unfavourable to an operation.

‘colliquation’ is the liquefaction of tissue.

It was therefore determined to remove a portion of rib or ribs, if necessary, as the seat of disease was considered to be there. Professor Dupuytren, and other surgeons of distinction, were present, and assisted at this formidable operation.

Baron Dupuytren – who has previously featured on the pages of this blog – was a French surgeon of considerable eminence, remembered today for the first description of Dupuytren’s contracture, a condition in which proliferation of benign tumours in the connective tissues of the hand make the fingers contract into the palm. Before reading on, bear in mind that this major operation took place almost thirty years before the discovery of anaesthetics. 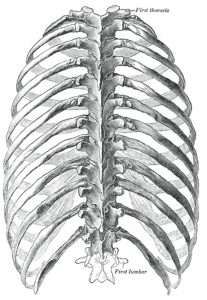 I commenced (says M. Richerand) by enlarging the wound through the medium of a crucial incision, and discovered the sixth rib enlarged and red for four inches in length. With a bistoury I separated the attachments of the intercostal muscles, above and below, through this space, and then with a small Key’s saw I cut through the rib in two places, and removed the diseased portion, carefully detaching, by means of a spatula, the costal pleura from the internal face of the rib.

The pleura is the protective membrane which covers the lungs.

The seventh rib was now found to be diseased, to an equal extent, and was removed in a similar manner, but with much more difficulty, and not without penetrating the cavity of the chest by a slight rent in the pleura. This membrane itself was now discovered to be in a thickened, diseased state; and, in short, to be the tissue whence the fungous vegetation sprang. It was diseased eight square inches in extent! To leave this behind was to leave the operation unfinished, and therefore the whole of it was removed by the scissors.

This was not a trivial undertaking. Puncturing the pleura allows air into the cavity around the lungs; this increase in pressure can cause one or both lungs to collapse, a condition known as pneumothorax. This is less of a threat in the modern operating theatre, because chest surgery is undertaken with positive-pressure ventilation – a tube is inserted into the trachea and a mechanical respirator inflates and deflates the lungs automatically. If a surgeon wishes to operate on one lung, it can be deliberately collapsed while the other carries on the essential task of respiration. M. Richerand had no such modern luxuries: if both his patient’s lungs collapsed there was little chance that he could survive.

Not a drop of blood was lost. At this moment the air rushed in, the left lung collapsed, and, with the heart enveloped in its pericardium, pressed and presented itself at the wound.

A dramatic spectacle. The (conscious) patient’s beating heart was now visible through the operative incision.

The wound was instantly covered with adhesive plaster to prevent suffocation. The anxiety and difficulty of breathing were now extreme, and continued so for twelve hours after the operation. The patient passed the night erect, and without sleep.

This is hardly surprising. He was lucky that his right lung appeared to be fully functioning.

Towards the morning sinapisms [a type of poultice] were applied to the soles of the feet, and insides of the thighs, rendering the breathing easier. From this moment the pulse rose and the strength increased. The patient was kept on liquids. Three days passed thus. The fever was moderate, but the oppression of the breath was sufficient to prevent sleep. Ninety-six hours after the operation, we removed the dressings. The pericardium and lung had contracted adhesions round the circumference of the wound, which now formed a kind of window, through which we distinctly saw the action of the heart through its transparent covering.

That would be a great icebreaker at parties, wouldn’t it?  Imagine being introduced to a fellow guest whose heart was visible through his chest.

Fortunately, the adhesion of the heart to the lung was not complete, and left a sufficient passage for a copious serous discharge which issued from the wound for ten or twelve days, in the quantity of half a pint a day. On the 13th day this discharge ceased; and by the 18th day, the adhesion between the pericardium and lung was complete, and no air entered from without after that period. The patient could now lie down and sleep; his appetite and strength returned; the wound healed, and he perfectly recovered.

Astonishing. And not quite the end of the story. In a more detailed account of the operation and its aftermath, subsequently translated in The Edinburgh Medical and Surgical Journal, M. Richerand gives this sequel:

The patient, who for some days had been making trial of his strength in a garden belonging to the house in which he lived, could not resist the desire of traversing in a carriage the streets of the capital. Not being fatigued by an excursion of five hours, during which he visited l’Ecole de Medicine, and caused to be shewn him the portions of the ribs and pleura, which are deposited in the Museum of that establishment…

I think if a large portion of my ribcage had been cut out without anaesthetic, and was now on display at a medical museum, I’d be unable to resist the temptation to look at it in its glass case.

…there was nothing to prevent his returning home, where he arrived safely on the twenty-seventh day after the operation, having provided himself with a piece of boiled leather to cover the cicatrix when healed.

An understandable precaution. One final detail of this case intrigued M. Richerand.  By the early 19th century it was generally accepted that the heart had no pain receptors – that one could, therefore, touch the organ without causing pain. Cases in which it was possible to touch a living human heart being few and far between, Richerand made sure to satisfy himself on this point.

I did not let slip the opportunity here offered of again proving the perfect insensibility of the heart and pericardium.

A medical curiosity which should not be allowed to overshadow a titanic surgical achievement. As the anonymous correspondent in The Edinburgh Medical and Surgical Journal points out, the entire operation was fraught with difficulty. Richerand’s account of sawing through and removing the patient’s ribs makes no mention of the fact that there are many important blood vessels in the area – some of them actually running along grooves in the underside of the bones. To remove sections of rib he had to dissect these free and tie them to prevent catastrophic blood loss. And he achieved this miracle with a patient who was fully conscious. Though this report doesn’t mention it, the patient was himself a surgeon; I’d like to think this helped him get through his ordeal, but somehow I doubt it.

One thought on “A window in his chest”