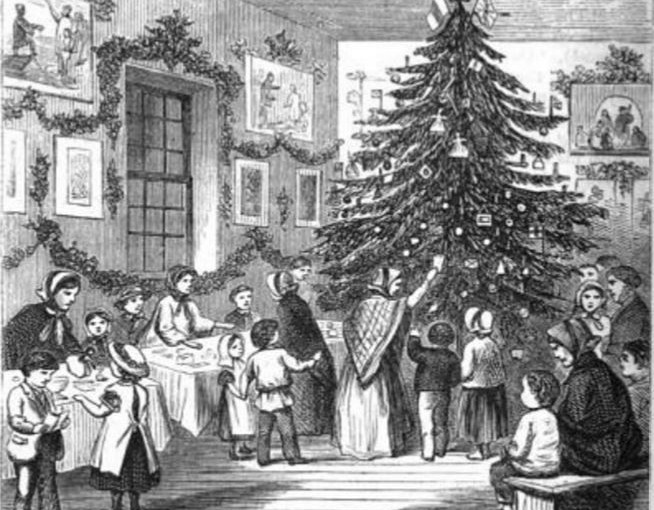 As a seasonal antidote to all the misery and medical disasters usually documented on this blog, here is something genuinely heart-warming. The Victorians were particularly good at Christmas – they invented most of the domestic Christmas traditions we enjoy today, from the meal to the tree.  A story published in the British Medical Journal in December 1869 shows them extending the seasonal cheer to London hospitals – in some style.

Christmas-day dawned more brightly in the wards of the hospitals of the metropolis than, we believe, it has ever previously done. We have several times advocated a more cheerful day than it has hitherto been the custom to allow the patients; and, a fortnight ago, we noticed the unusually liberal preparations going on in the wards for the great holiday of the year. Many hospitals, which had before looked coldly on good cheer, we are happy to see, now bid fair, ere long, to join the party of gaiety.

The preparations were lavish; even the best decorated ward in a modern hospital would struggle to compete with what seems to have been on display in 1869:

The wards of all the hospitals were this year more or less decorated with flowers, natural and artificial; with evergreens, and scrolls bearing appropriate inscriptions. A keen interest was shown in this work by the sisters and nurses, and by their patients, one ward emulating the other in the taste and profusion of the decorations. Some hospitals were unusually well decorated, more especially the wards of King’s College, St. Mary’s, and Middlesex Hospitals. On Christmas morning, chapel-service was conducted in all the hospitals; and in several an opportunity was afforded those patients who felt disposed to attend also in the evening.

Hospital food has always had its detractors, but they pulled out all the stops. No turkey or goose for these patients, though.

The Christmas dinner of roast beef and plum-pudding followed about one o’clock, to which were added little luxuries, as oranges and raisins, sent by friends of the hospital, or subscribed for by the resident medical staff or pupils, as at Guy’s Hospital, where £10 were raised by voluntary contributions.

But there was another Christmas indulgence which certainly would not be allowed in 2015:

But we must not forget another luxury, of far greater importance in the eyes of the male patients of Guy’s Hospital than trifling oranges and raisins—we mean the pipe; for on Christmas-day, and only on Christmas-day, the men were allowed to smoke in the wards. In the evening, tea and light cakes were also supplied in several of the hospitals. The Christmas-trees, which were to be found in all the children’s wards and in many others, loaded with useful gifts and bonbons from charitable friends, were then lit up, and their tortured branches soon relieved of their burdens. Christmas carols were then sung until a late hour.

If we put aside for a moment the fact that many of these patients were seriously ill, it all sounds a lot of fun. Even sick children from the slum areas of the East End were included:

Such was more or less Christmas-day in our great London hospitals; but, of course, some of the smaller special hospitals had made arrangements beyond the reach of their larger brothers; and, of these, none shone forth so resplendently as the East London Children’s Hospital, “The Small Star in the East,” where over one hundred children, the old and present in-patients of the hospital, collected from the dens of Ratcliffe and Stepney, were invited, on the condition of perfect cleanliness, to spend their Christmas-eve. The tea and cake, spread ad libitum on tables in the out-patient rooms, which were almost smothered in flags and evergreens; the Punch and Judy, sent by a kindly disciple of that ancient drama; and the magic lantern,—afforded a fund of amusement to the little patients. The handsome Christmas-tree, heavily laden with appropriate gifts for every one; the little choral party, drilled with a wonderful success by the kind lady of the hospital; and the romp and dance to the music of the recognised hospital organ-grinder in the neighbouring room,—were crowned by the parting gift of fruit and cake, and, kindest of all, an article of warm clothing.

Though much was wrong with Victorian London, their charitable efforts were often admirable. Wishing my readers a very happy Christmas.