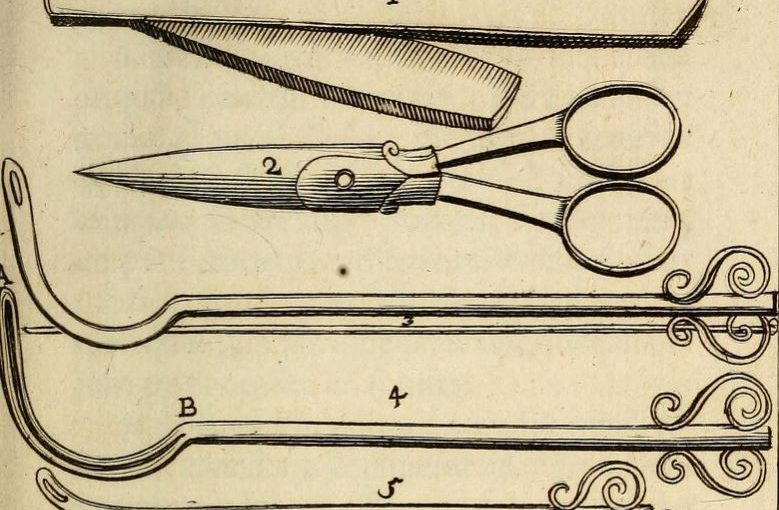 Some of the greatest advances in nineteenth-century surgery were made by military surgeons. British surgeons were not exactly short of opportunities: the country’s military forces began the century at war with France, and ended it fighting the Boers, with barely a peaceful year in between. While battlefield injuries provided horribly frequent opportunities for improving surgical techniques, not every wound was caused by enemy action.

In 1848 a British army surgeon, George Williamson, wrote a long article for the Edinburgh Medical and Surgical Journal about a number of cases he had encountered while serving in India and China (he would later see active service in Turkey, the Crimea and South Africa).  Among the sabre and shell wounds was this curiosity, which Williamson later included in his textbook Military Surgery (1863), observing that it ‘illustrates the tricks that soldiers play upon each other’.  As you’ll see, ‘trick’ is far too mild a term for this misbegotten prank:

The unfortunate victim was James Hussey, aged 25, a private in  the 18th Regiment (later known as the Royal Irish Regiment). Hussey had been in the army for seven and a half years – mostly serving in China, where he had fought in several battles during the First Opium War.

At Hong Kong, on the 24th October 1845, he was taken to the guardroom in a state of intoxication.

The guardroom is the military equivalent of a police cell. Private Hussey had been found drunk and incapable.

When he became sensible, he found a piece of cane about a foot long in the urethra, retained by a string tied round the penis; on removing both of which there was slight haemorrhage.

Not a very pleasant discovery. But who could have done such a thing?

The guardroom contained at the time a number of men waiting to be tried by general courts martial, and he suspected one of them to have played this trick upon him.

Ah yes. If you’re dead drunk and sharing a cell with a number of violent criminals, it is not ridiculous to suspect such a thing.

He did not go into hospital for a month after, when he complained of pain over the pubes, inability to void his urine, and when able to do so, the urine was passed mixed with blood and a copious deposit of mucus.

Yuck. The symptoms suggest that there may have been a degree of infection by this stage – hardly surprising.

On introducing the catheter a grating sensation was experienced. The patient himself did not know that anything had been pushed into the bladder. He was admitted into Fort Pitt General Hospital 19th May 1847, very much emaciated, with a dry and scaly skin, gums spongy and scorbutic [affected by scurvy]

Fort Pitt was a military hospital in Kent. The patient had somehow put up with his symptoms (and, presumably, a high degree of discomfort) for eighteen months, including a long sea voyage.

He was also labouring under diarrhoea, which attacked him on board ship five months previous, as he was about leaving China. He complained of constant excruciating pain across the bottom of the abdomen, at the site of the neck of the bladder and along the course of the urethra. He could not retain urine, which was continually flowing from him in drops.

The doctors inserted a probe into the soldier’s bladder and detected what they believed to be a large, and soft, stone.

The great pain which he suffered for the last eighteen months made him very anxious to have something done for his relief. His general health having considerably improved, and the diarrhoea having been in a great measure checked, on consultation it was determined to remove the calculus, which was accordingly done by the lateral operation of lithotomy, on the 14th June.

The ‘lateral operation of lithotomy’, perfected by the English surgeon William Cheselden in the 1720s, entailed an incision in the perineum, between the penis and anus. A grooved staff was then inserted and used as a guide for a cutting instrument, which incised the bladder in its side, just above the prostate. The cutting instrument was then removed, and a pair of forceps inserted to grasp and extract the bladder stone. This eye-watering illustration gives you some idea of the technique:

The procedure was a significant improvement on earlier methods of bladder stone removal: it could be completed in less than a minute, and had a mortality of less than 10%. Patients typically took three months to recover from the operation, which could be horribly painful – but at least it was quick. Private Hussey was unlucky: two or three years later he might have been given chloroform or ether, but in 1847 few surgeons had yet adopted general anaesthesia.

On placing the patient on the table, and introducing the staff, it was felt to enter the centre of a large soft stone, and there become in a manner fixed. On making the incision into the neck of the bladder a small quantity of fluid escaped. The bladder was now found to be completely filled with a large friable stone, and very firmly contracted in its contents.

The surgeon scooped out ‘several large masses’, and then found a substantial hard object lying sideways in the bladder. This he also removed, before washing out the bladder and sewing up the incision. The entire procedure had taken less than five minutes; the stone removed weighed rather more than three ounces. It contained a surprise:

The hard body extracted was a piece of bamboo, 3¾ inches long and hollow in the centre, what is frequently used by soldiers as a stem for their tobacco pipes.

All things considered, this was a very strange practical joke to play on somebody – and, in all probability, on a complete stranger.

The patient never had a bad symptom, and although his health was very indifferent, the wound was all but healed in three weeks after the operation; a small fistulous opening, however, continued to give exit to the urine for some time, and required to be touched with a hot wire, after which it closed completely.

A good result – and indeed the patient made a full recovery.

The diarrhoea has also gradually ceased, and he is now in good health, and will soon be able to resume his duties as a soldier.