Here’s a tale of misadventure so stupid that it wouldn’t be out of place in the annual Darwin Awards. This case was reported to the Ohio Medical and Surgical Journal in 1849 by a Dr William Lindsay. 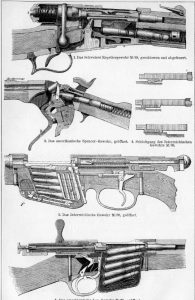 Jacob Snider was an engineer and a figure of considerable historical importance. He invented a mechanism which made it possible to convert a muzzle-loading rifle to a breech-loader – which allowed soldiers to fire three times faster than previously.  His invention was adopted by the British Army, and the Snider-Enfield was its standard rifle for almost a decade in the 1860s. So it’s somewhat surprising that his son could do anything quite as stupid as this:

While blowing into a rifle which he firmly believed was not loaded, he had the temerity to place his foot or great toe upon the hammer of the lock, and springing it, the piece exploded.

It doesn’t really matter whether you thought it was loaded, does it? Peering into a rifle barrel while holding the hammer with your toe tends to be a bit of a no-no in safety terms.

He immediately fell, as though dead, but soon recovered the use of his faculties and limbs. On examination, it was found that the two front incisors of the upper jaw were gone, and that the ball, entering there, had passed upwards, almost exactly in the median line, that is to say, the ball entered the socket of the right incisor, with a slight inclination to the left, perforated the septum, and, entering the frontal sinus, made its appearance under the skin and periosteum, about three-fourths of an inch above the superciliary ridge, and a few lines on the left of the median line.

The bullet took an unusual path: passing upwards through the upper jaw and sinuses before reappearing under the skin of the forehead, just above the eyebrows.

The skull was fractured by the outward passage of the ball, but the brain did not seem to be at all affected. There was some hemorrhage from the mouth and nose, and an oozing of blood from the inner canthus [corner] of the left eye. One tooth was discovered and removed from the wound some days after the accident; the other was not found. Small spiculae of bone came from the wound at intervals, and, some six weeks after the accident, Dr. Lindsay removed a portion of dead bone from high up in the left nostril. The ball was, of course, removed, and with it the “patch,” and the wound properly dressed.

The “patch” was the piece of skull punched out by the bullet.

No untoward symptoms occurred, and the young man speedily recovered. The only remarkable circumstance about this case is the very fortunate direction and lodgment of the ball. Had the young man’s head been in almost any other possible position, he must have been instantly killed. As it was, the ball kept so near the median line as to avoid all important vessels, nerves, and organs. It probably did not enter the cavity of the brain at all, else there would have been more disturbance of the cerebral functions. The young man had a most fortunate escape.

3 thoughts on “A most fortunate escape”