Bloodletting is an inescapable theme of a medical blog set largely in the nineteenth century. Although venesection (opening a vein) was frequently used, for minor complaints the weapon of choice was the leech, which could extract a small amount of blood relatively painlessly. Doctors varied the numbers of leeches applied according to the severity of the complaint – as many as twenty were sometimes applied simultaneously to the temples to treat migraine. This example of leech therapy, reported in the Ophthalmic Hospital Reports and Journal in 1873, however, shows the dangers of a carelessly applied leech:

A man, aged 39, a domestic servant, applied on account of severe inflammation of the right eye. At the lower and outer margin of the cornea a triangular wound, unmistakeably a leech bite, was detected; the pupil was displaced as after an iridodesis, and there was a considerable hypopyon which filled the lower part of the anterior chamber.

‘Iridodesis’ (more usually ‘iridesis’) is an operation to reposition the pupil – sometimes undertaken if the iris had been damaged, for instance by traumatic injury. A ‘hypopyon’ is an accumulation of white blood cells – essentially, pus – in the front part of the eye. This is a sign of severe infection and something you really did not want to observe in a patient in an age before antibiotics.

The patient said that after suffering from irritation of the eye for some time, and after a practitioner had tried various remedies without effect, a leech was ordered to be applied to the inflamed part.

This ‘practitioner’ must surely have been a quack. I have previously written about doctors applying leeches to the inside of the eyelid to treat conjunctivitis, but among qualified practitioners, surely not even the greatest enthusiast for bloodletting would imagine that letting one loose on the eyeball itself would be a good idea.

The leech took hold far forwards and pierced the eyeball. 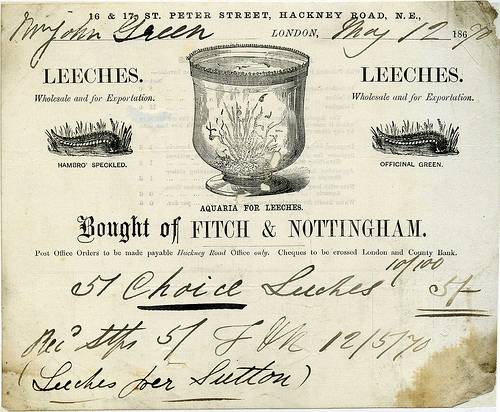 What followed exactly can only be conjectured, but the border of the iris, corresponding to the bite, had disappeared and the pupil was displaced as if after an iridodesis, excepting that the iris and the deeper-seated membranes were strongly inflamed; the lens was not affected; the globe seemed somewhat softened. Although there had been no fistula [opening of the eyeball], and in spite of treatment, a low form of inflammation of the deeper membranes persisted, the pupil became completely closed, and the globe was evidently wasting. In this condition he left the hospital, but was warned to return at once if the other eye became affected.

Two months later the man returned, with the other eye indeed affected – almost certainly the infection had spread from one to the other. The leech-bitten eye by this point was too damaged to be saved:

The right globe was removed. Afterwards the sympathetic irritation of the left began to diminish, and finally disappeared, but, according to the patient, the amount of sight remained the same.

Since once case of leech bite to the eye is never enough, here’s a strikingly similar case recorded in the Glasgow Medical Journal in 1863:

Professor Von Graefe relates, in the second part of the seventh volume of the Archiv fur Ophtkalmologie, the case of a delicate little girl, of five years of age, who, some days before he saw her, had on account of headache been ordered a leech to the right temple. The eye itself before this application had been quite healthy, and its vision perfect. He found the interior chamber filled with blood; the lower half of the conjunctival sac, including the edge of the cornea, ecchymosed [bruised]; in the lower half of the cornea a wound, the edges of which and neighbourhood were somewhat swollen, and presented a greyish opacity. The form of the wound, on close inspection, left no doubt that it was the result of the bite of a leech.

It came out, that, in making the application ordered, the leech had slipped away, had crept into the eye, and there, under considerable pain to the child, had accomplished its work of destruction. Unfortunately, perception of light was completely lost, apparently in consequence of total separation of the retina by haemorrhagy.

The blood released into the chamber of the eye had pooled behind the retina, the thin light-sensitive layer at the back, which had then peeled away, blinding her.

He saw the child a few times afterwards. The blood in the anterior chamber had partly disappeared, the eyeball was already boggy, and he had no doubt that phthisis oculi had commenced.

‘Phthisis oculi’, more usually known today as phthisis bulbi, denotes a shrunken eye that has ceased to function. At this point the case was hopeless – sight was already lost.

One thought on “A leech on the eyeball”