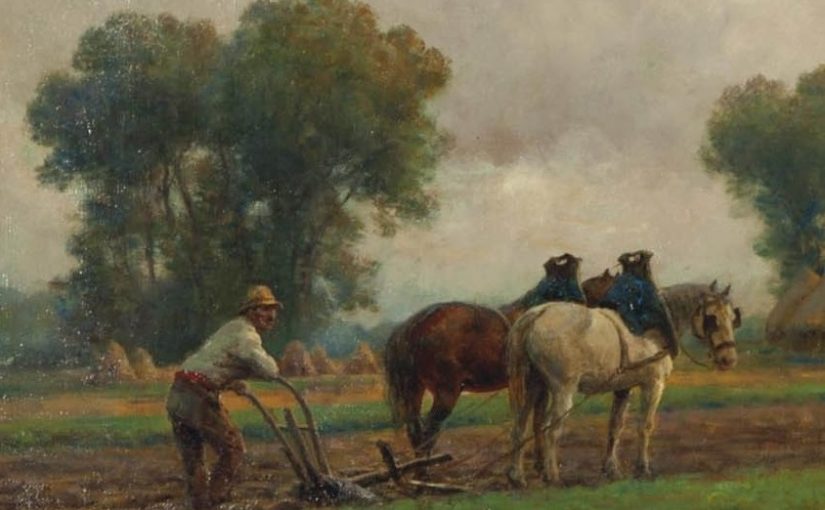 In 1873 the Chicago Medical Journal published this article by a Dr Stewart from Muscatine, a small Iowa town on the banks of the Mississippi that would later become famous as the world-leading manufacturer of pearl buttons.

The article’s matter-of-fact headline scarcely does justice of the drama to come:

Anthony B., a lad aged 17, while standing beside a plow team, with the reins about his neck, had his team attempt to run off, and before he could stop them he was thrown on his face in front of the plow…

Pure bad luck. It appears that the team of horses pulling the plough (to use the British spelling) bolted, and the young man fell down, entangled in the reins. The main cutting blade of a plough, the ploughshare, is a fearsome object.

…the point of which, engaging him in the region of the small of the back, and dragging him for some distance, inflicted the following described wound:

There follows a highly technical description which includes terms such as ‘serratus-posticus-inferior’ and ‘quadratus-lumborum’, so I’ll paraphrase:

The plough made a semi-circular incision about 11 inches long in the youth’s lower back, from the pelvis to the bottom of his ribcage. It ripped through numerous muscles and scraped one of his ribs, and impaled the liver, making an incision so deep that the hepatic artery – the liver’s main blood supply – could be clearly felt.

Nearly or quite all of that portion of the left lobe of the liver anterior to the incision in its substance as described, we found protruding through the wound.

Any injury that leaves a substantial part of the liver hanging out through a wound in the abdomen is an obviously critical one.

Dr Stewart arrived about two hours after the accident. This is what he found:

Patient nearly comatose from loss of blood; hemorrhage, however, being from small vessels only, had ceased. The integument [flesh] bordering the wound, was very much retracted, as were also the muscles through which it (the plow) passed, except the latissimus dorsi at its inferior border, where, from the direction of the incision, the muscular fibres were simply separated—thus presenting a wide and gaping wound.

The doctor then performed an examination which involved what must have been – from the patient’s point of view – a thoroughly unpleasant rummage around his internal organs.

Upon passing our hand into the abdominal cavity, we found present a large amount of blood, which we removed with a sponge, and continued our search for more extended injuries than those already described; examined the stomach, which, being empty, and in a partial state of collapse, had escaped injury; as had also the intestines, diaphragm and other organs. The abdominal aorta could be distinctly felt in the floor of the wound, but uninjured.

The young man had been incredibly lucky. Any injury to the abdominal aorta, the main blood supply to the major organs and lower extremities, would surely have proved fatal. Similarly, an injury to the stomach or intestines might have provoked massive infection, which at this date was impossible to treat.

Treatment.—Seizing that portion of the liver protruding from the wound, we replaced it as nearly as possible in its normal position; but upon removing our hand it came immediately out again, seeming to require considerable pressure to maintain it in place; we returned it a second time, and employed an assistant to retain it in position until we could close up the wound, and apply over it a compress to hold it securely in position.

The mental image of the unfortunate patient’s liver refusing to stay put inside his abdomen has a certain bleak humour to it. Having finally succeeded in restraining the errant organ, Dr Stewart sewed up the wound.

In this we experienced some difficulty in consequence of the extensive laceration of tissues, but finally succeeded, and finished the dressing by placing over that portion of the liver which had been displaced, a large compress, and over that and around the body several times, a wide roller bandage.

The doctor instructed that cold water should be applied to the bandage every 15 minutes – a regime which must have been exhausting for the patient or his attendants. They were (rightly) worried about infection, and prescribed a scanty diet in an attempt to prevent its occurrence. The youth was also given opium for pain relief and to help him to sleep.

Our patient gained strength from the first, pulse becoming from day to day more firm; the wound, which we dressed daily, looked healthy, and, what is remarkable, there never appeared at any period the first indication of peritonitis.

After twelve days the surgeon concluded that the danger of infection was finally over, and the patient was allowed a more hearty diet.

At this time the flaps sloughed off, and exposed to view the liver, and also the twelfth rib, the former of which we discovered to be protruding somewhat through the wound; we endeavored to reduce it as at first, but discovered obstacles in the way; adhesions had formed between the walls of the abdomen and both the superior and inferior borders of the left lobe, which rendered that lobe immovable.

Oh dear. The liver had popped out again. What to do? Cut it off, of course.

It being impossible for the wound to heal in this condition, we resorted to the use of caustics and the knife, (using the caustic potash), for the purpose of getting rid of this protruding portion of the liver, applying the caustic daily, and afterward paring off with the knife cauterized material, until the prominence had disappeared.

An interesting idea. The surgeon used a highly caustic substance, potassium hydroxide, to (effectively) cauterise the liver, and later cut off the dead sections of tissue with a scalpel. By using the caustic first, he killed the tissue and its associated blood supply before it was removed, hence preventing major bleeding. This may in fact have been an excellent approach to take. The liver is the only human organ able to regenerate extensively – indeed, its powers of recovery are quite remarkable. Even if two-thirds of the organ has been removed surgically, the organ will usually regrow to its normal mass.

We next examined our rib denuded of periosteum…

Periosteum is the connective tissue that usually lines the bone, which in this case had been scraped off by the plough.

…and discovered that it was not taking care of itself so nicely as we anticipated it would, and after watching it a few days, decided that amputation would be necessary, as it was becoming still more denuded, and besides was standing out more prominently than it should, and irritating the wound, preventing it from healing kindly; therefore with bone forceps we removed about one-half of it.

This apparently did the job.

The wound was inflicted May 7, 1873, and can be said to have terminated in complete recovery in about seventy days’ time—a result to us unexpected.

A really impressive result. This was, at the time, one of the most serious such injuries ever recorded in which the patient had made a total recovery, and Dr Stewart deserves whatever plaudits he received.