On the 19th of May, 1846, a Dr Harris from Harrisville in Virginia was summoned to treat a young man who had got himself into a situation of some delicacy. This is how the doctor reported the case to the Western Journal of Medicine and Surgery:

He had been suffering from an attack of piles, and having been informed that the disease could be cured by introducing the neck of a well-greased bottle containing some hot spirits of turpentine, he undertook to prove the remedy. But unfortunately, using nothing larger than a half pint flask, and having, as I suppose, a more than ordinarily capacious outlet to the alimentary canal, the flask slipped in, and the sphincter closed upon it.

Here is a dilemma—a man with a half pint flask in his rectum seeks relief; and what is to be done?

Notwithstanding the case borders a little upon the ridiculous, it became, to me, a subject of most serious and anxious concern. At length, however, I resolved upon a plan, and accordingly went to a blacksmith and had a pair of forceps made somewhat after the fashion of the obstetrical instrument, with blades about seven inches long, by about three-fourths of an inch wide, and handles eight or ten inches long. These being prepared, and the blades well greased, I introduced a blade at a time so as to inclose the bottle, locked the instrument, and commenced my efforts at extraction. But the blunt end, or bottom of the bottle presenting, I soon satisfied myself that it would be no easy task to effect its removal. At length, by the force of my efforts, I smashed the flask in fragments.

However ridiculous the circumstances of the case, a smashed bottle inside the rectum is no laughing matter.

Having no further use for my forceps, I laid them aside and set myself carefully to work, removing it, a piece at a time, with my fingers. This I completely accomplished after laboring faithfully for about three hours.

Not much fun for the doctor, but imagine being the poor patient! The doctor was successful in his efforts, however, and after washing the rectum gave the man a painkiller. He was able to return to work and seemed absolutely fine. But that wasn’t quite the end of the matter: 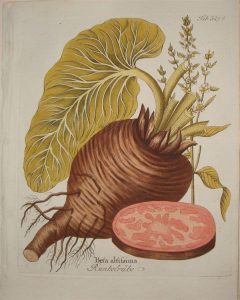 On the 29th of January, 1847, I was called to see the same patient, and informed that a similar mishap had befallen him, the body now introduced being a beet.

I hate to break it to you, doctor, but it seems unlikely that this patient’s antics had anything to do with ‘treating himself for piles’.

I made an examination, and could trace with the finger the large end of a beet of such dimensions as to cause the utmost astonishment; and to increase the difficulties of the case, it had been retained more than 48 hours, the patient having entertained the intention of dying like a hero, without disclosing his condition; from which determination, however, the intensity of his sufferings forced him to depart.

Expiring with a beet up one’s bottom seems a rather strange definition of ‘dying like a hero’.

There was now a good deal of tumefaction and tenderness about the anus; and very great tenderness of the abdomen generally—vomiting had set in. I again introduced my forceps, but with great difficulty, on account of the tumefaction and soreness of the parts, and soon found that I could not make the necessary extractive efforts without having my forceps slip off: the patient was also exceedingly irritable, and could not endure the necessary force.

I think most people would be exceedingly irritable under these circumstances, to be fair.

I now took my forceps to the smith, had the width of the blades reduced one-fourth, and the points turned in so as to form a hook, obtained two or three assistants, and returned to the novel operation.  Having premised a free bleeding and the hot bath, so as to obtain a good degree of relaxation, I administered 35 drops of the tincture of opium, and having placed my patient on his knees and strapped him down tightly over some chairs, I again introduced my forceps, and quickly succeeded in bringing away a beet nearly seven inches in length, and in its largest diameter about three and a half inches.

A champion specimen, to be sure.

It had evidently been selected by my patient on account of its size, in order that it might be impossible for it to be taken in; and feeling thus secure, he had introduced the small end, and pressed down upon it with his whole weight. I now administered injections, and laxative doses, and restricted my patient to a low diet for two or three days, when he again resumed his employment.

This is apparently the last time that Dr Harris encountered his hapless patient. Maybe he went to another physician the next time he got into similar difficulties.

2 thoughts on “A beetroot up the bottom”