A peculiar case was reported to readers of The Lancet in 1856 by Dr Jonathan Green, the proprietor of a London business offering therapeutic sulphur baths.  One day he encountered a mysterious patient who would not give her name:

She came to my establishment, as it were, determined not to be recognised, wrapped up in a shawl, veil, &c., and merely asked for a sulphur fumigating bath. She never said who she was, nor did she name any medical gentleman that had recommended her to take the fumigation. She merely told the female attendant that she had been under the treatment of the first medical authorities of the west-end of London; – that they had done her no good, and that she was determined of her own accord to try the sulphur fumigations, and did not say what was the nature of her malady. On the evening of the day that she took her first fumigating bath, the attendant (a more than usually clever, experienced woman) came to me, saying she had that day had a very curious and not pleasant case—that the patient was all over worms, and that she saw them creeping from the patient’s forehead and face whilst she was in the bath. I answered abruptly, by telling her not to talk such nonsense; she, however, seemed to maintain that she was right.

The patient returned for further baths; on each occasion the attendant returned with a similar story, but every time she was again rebuffed by the sceptical doctor.  Until:

On coming out of the fourth fumigation, there was such a very, very numerous escape of worms, that the attendant again became uneasy, and I suppose some discussion took place between her and the patient. The result was, that the latter sent me word “that, as I would not believe, I might come down and judge for myself.” I did so, and never was more surprised; there stood the patient en chemise. I was cautioned as I entered the room not to tread on the worms, and at once saw a round ring of pinkish-white on the floor; these were worms which had fallen from under the chemise, and had not been swept up, in order that I might see them. The lady’s head, face, and chest, were covered with the shawl and veil; she seemed afraid of being recognised. On removing part of the veil from the forehead, then wreaking with perspiration, I saw little red points sticking out from the skin at right angles, and whilst looking at them some seemed to retract themselves, others evidently were getting longer, and became a quarter of an inch and more in length, and then fell on the chest and to the floor, as others had done. 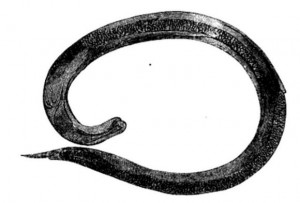 I then held aside more of the veil from the face, ear, and neck; there was the same appearance of little pink thread-like worms, as thick as they could cluster, elongating themselves to get out of the skin, and then falling, as from the forehead, on the floor. Many of them seemed to give a sort of jump or jerk before they could escape and fall from the person. The lady became more emboldened, and I was allowed to remove the shawl from the neck and chest, and afterwards from the arms, legs, &c.; but from all parts of the person these worms were sticking out, stretching themselves, and then with a positive jump escaping from the skin to the distance of six or eight inches, occasioning me to stand at a distance, in order that they might not fall or spring on to myself.

Horrified but fascinated, Dr Green examined these worms, which were up to half an inch in length:

They were annular and transparent, with red heads, and the tail part was larger than the head part. They lived only a few minutes after escaping from the skin, wriggling themselves as worms do, and almost invariably curled themselves into a. crescent or horse-shoe form, then, takin a spring to many inches distance, fell quite straight and dead, and the red heads in that short time would become dark-brown, approaching black in colour. The napkin with which I had wiped the parts of the person I placed on a table, and having occasion to take it up again from its folds, the table under it was covered with these worms. I gathered about two or three tablespoonfuls of them.

The lady whose case is just related was very desirous of getting rid of her odious complaint, as she called it; it was a sad source of annoyance to her husband, as the worms were constantly escaping on to the pillows and sheets, and had been so doing for more than two years.

Well, he had a point.

She attributed, as the cause of the complaint, her having fallen asleep in the air, near some stagnant water, and on waking found her mouth and nose full, as she said, of young gnats. I suppose she got well, for after a few more baths I never heard anything more of her, which I judge I should have done had she not got well, for certain it is, she found a direct and powerful remedy in the use of the fumigations for dislodging these worms, not in hundreds, but I may safely say in thousands.

One thought on “Worms on the pillow”