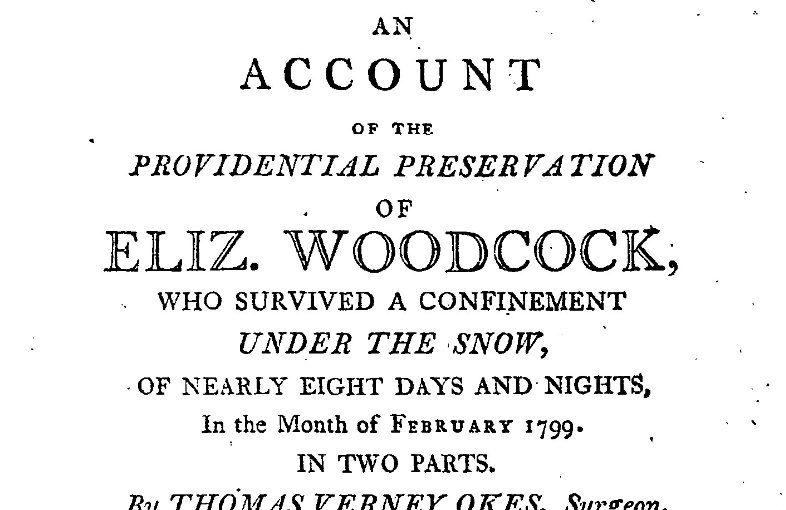 In a week that’s seen snow across much of Britain and record low temperatures in parts of the US, this story from the Annals of Medicine for 1799 seems particularly appropriate:

A remarkable and well-authenticated case, of a woman surviving nearly eight days buried in the snow, without food, has occurred this spring, near Impington, in Cambridgeshire.

It’s no exaggeration to say that the story caused a sensation. This is how one newspaper reported it:

I love that conclusion:  Wonders!  Wonders!

The Annals of Medicine report is abridged from a longer account by the surgeon who treated the patient. This would eventually be printed as a pamphlet entitled An Account of the Providential Preservation of Elizabeth Woodcock, who Survived a Confinement Under the Snow, of Nearly Eight Days and Nights, in the Month of February 1799. Its author, John Verney Okes, was a successful Cambridge surgeon with a substantial local practice.  One of his twenty (!) children would go on to be Provost of King’s College, Cambridge.

Elizabeth Woodcock, aged forty-two, of a slender delicate make, on her return from Cambridge, on the evening of the 2nd of February, being fatigued and exhausted with running after her horse, which had started from her, and becoming incapable of proceeding, from the numbness of her hands and feet, sat down on the ground.

The horse had apparently been ‘startled by a light’ which Okey suggests was a meteor. This is quite plausible – in fact, a large meteor was seen over parts of northern England only last night.

At that time but a small quantity of the snow had drifted near her, but it began to accumulate very rapidly; and when Chesterton bells rang, at eight o’clock, she was completely enclosed and hemmed in by it.

Cambridge to Impington is a journey of less than four miles. Chesterton is about halfway, and in usual conditions would have been an easy walk from the centre of Cambridge. The bells she heard were those of St Andrew’s, an ancient church once attended by Samuel Pepys.

To the best of her recollection, she slept very little during the first night, or indeed any of the succeeding nights or days, except Friday the 8th.

The newspaper report, which claimed she spent most of the time asleep, was entirely wrong.

On the morning of the 3rd, the first after her imprisonment, observing before her a circular hole in the show, about two feet in length, and half a foot in diameter, running obliquely upwards through the mass, and closed with a thin covering of ice or snow, she broke off a branch of a bush that was close to her, and with it thrust her handkerchief through the hole as a signal of distress.

Good thinking, though if it was a white handkerchief this would not have done much good.

In consequence of this, the external air being admitted, she felt herself very cold.

An interesting illustration of just how effective an insulator a layer of snow can be. She was, in effect, trapped inside an igloo – the reason for her survival. The winter and spring of 1799 were bitter: it is believed to have been one of the coldest years of the entire 18th century.

On the second morning, the hole was again closed up, and continued so till the third day, after which time it remained open. She heard distinctly the ringing of the village bells, noises on the highway, and even the conversation of some gypsies who passed near her, but could not make herself heard. She easily distinguished day and night, and could even read an almanack she took from her pocket.

Reading a book doesn’t sound like something one would feel like doing while stuck in a snowdrift and about to freeze to death, but I suppose you’ve got to pass the time somehow.

The sensation of hunger ceased almost entirely after the first day. Thirst was throughout her predominant feeling; and this she had the plentiful means of allaying, by sucking the surrounding snow. She felt no gratification from the use of her snuff.

Again, tobacco products would not be high on my list of priorities in such circumstances.

On Friday the 8th, when a thaw took place, she felt uncommonly faint and languid, her clothes were wet quite through by the melted snow, and the aperture became enlarged, and tempted her in vain to attempt to disengage herself. On Sunday the 10th, a little after midday, she was discovered. A piece of biscuit and a small quantity of brandy were given her, from which she found herself greatly recruited; but she was so much exhausted, that on being lifted into the chaise, she fainted.

She had been entombed in snow for over a week, so this is hardly surprising. Somehow she had avoided defecating for all that time, and had barely passed urine.

Mr. Okes saw her that day on her way home. He found her hands and arms sodden, but not very cold, and her pulse did not indicate the great debility which might have been expected. Her legs were cold and her feet in a great measure mortified.

They were ‘mortified’ in the quite literal sense of being dead: she had evidently developed frostbite at an early stage of her ordeal, losing the blood supply to her extremities. Necrosis (tissue death) was already well advanced.

She was directed to be put into bed without delay, and to take some weak broth occasionally, but no strong liquors, and not to be brought near the fire.

Very sensible. Patients with severe hypothermia should not be warmed too quickly, as this can cause shock or even cardiac standstill. It is also important that the core temperature is raised before the extremities are warmed up.

Next day she was affected with symptoms of fever, her pulse was rising, her face was flushed, and her breathing short, occasioned probably by having taken too much food, and being incommoded by the crowd of visitors. Her feet were also in a complete state of mortification, her ankles cold and benumbed, and the integuments puffy.

Mr Okes’s original report is rather more explicit about the condition of her feet, which were now giving off a ‘most offensive’ smell.

Cloths welted with brandy were applied to her feet, some antifebrile remedies and a little opium were given her. The mortification, however, proceeded and on the 17th of March, all her toes were removed, and both ossa calcis were bare in many parts.

Now generally called the calcanaeus, or heel bone. This was evidently a very severe case of frostbite – it is possible that a modern surgeon would consider a foot amputation justified in such circumstances. In his pamphlet, Mr Okes describes removing ‘a large quantity of integuments which hung loose at the bottoms of her feet’.

On the 17th of April, the date of the last report, the sores were free from sloughs, and diminishing daily in size; her appetite was become tolerably good; and her health was improving.

A woodcut of the now convalescent Mrs Woodcock appeared in later editions of Mr Okes’s pamphlet about her case. Profits from this publication, incidentally, were to benefit her and her family.

Mr Okes was confident that new skin would form on the soles of her feet, where the frostbite had most affected them, but this may have been a forlorn hope.

Notwithstanding these favourable appearances, we find her death announced in the public prints of September.

There is no indication of what killed her: it may have been infection, but her death may also have been unrelated to the incident seven months earlier.