One of the things that strikes me every time I look at a medical journal published between about 1850 and 1900 is quite how dangerous the early railways were. More or less every issue contains a report of a major accident in which passengers were killed, or railway workers maimed or injured after wholly avoidable mishaps. Safety standards were non-existent, and the toll on life and limb was considerable. This case, published in 1895 in the British Medical Journal, was simply unlucky – I doubt any amount of health and safety legislation might have prevented it – but the patient was remarkably lucky to escape with his life.

The patient, G. T., a sober well-conducted railway fireman, aged 36, was brought to the Peterborough Infirmary at 4 A.M. on October 28th, 1893, with the broken end of an oil feeder protruding from his right cheek, a little behind the angle of the mouth. It was stated that, in stepping from the tender on to the footplate of his engine with the oil feeder in his hand, he slipped and fell forwards, the spout of the oil can being driven forcibly into his face.

This description scarcely does justice to the extent of the injury. The spout of the oil can was a long, thin object, and more than six inches of it had disappeared inside the man’s cheek. 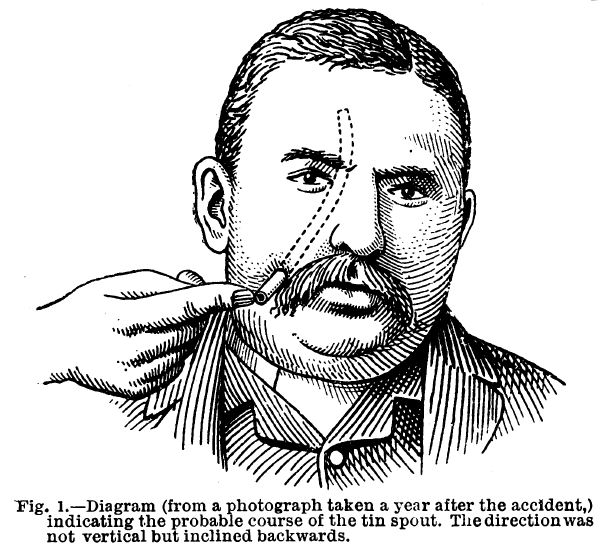 He was then quite senseless, but partially recovered consciousness in a few minutes. When he was being placed on the stretcher someone suggested a coat for his head, and he was sensible enough at that time to say that his own coat was on the engine, so that the loss of memory, afterwards so conspicuous, was not then present.

He reached the hospital less than an hour after the occurrence of the accident, and was seen at once by one of us. He was then quite conscious, and tried to answer questions. There were frequent twitching and jerking movements of the limbs, most marked on the left side, the legs being drawn up and the body bent forwards, as if he felt obliged to sit up.

Those jerking movements were evidence of a serious brain injury.

There was no haemorrhage from mouth, nose, or ears. The metal spout of the oil can was firmly fixed in the base of the skull, and required firm traction with forceps to relieve it from the grasp of the bone, and then, owing to its tapering shape, it was easily removed by the fingers.

The surgeons were surprised to find that the wound did not bleed at all; luckily the spout had missed all the major blood vessels. All they could do was clean and dress the wound.

After removal of the tube the violent jerking movements ceased, a few occasional twitchings only remaining. There was now marked paralysis of the left side of the face, with inability to close the left eye completely, complete paralysis of the left arm, while the leg was  comparatively little affected. No hemianaesthesia could be made out. He had become drowsy and confused, and unable to give replies to any but the simplest questions.

‘Hemianaesthesia’ is numbness of one side of the body or face. The partial paralysis (hemiplegia) was another sign that the brain had been injured.

At 10 A.M. (six hours later) he was still half unconscious, and had passed his urine into the bed during the night. His pulse was 82, and his temperature had risen to 102. The pupils were contracted, the right being slightly smaller than the left. They both reacted to light. There was still well-marked paralysis of the left face and arm, and the left leg was weaker. No anaesthesia on the left side. On the right side there was complete anaesthesia of the right eyebrow and of both eyelids, and of the right cheek for an uncertain distance below the lower eyelid. (The patient’s mental dullness rendered accurate testing of his sensation extremely difficult.)

Like any other part of the body, the brain tissue becomes inflamed after injury, and the subsequent swelling means that symptoms tend to get worse before they disappear – if the patient survives this initial period. This man was lucky, however: he started to get better.

After a few days power began to return in the left side, first in the lower limb; afterwards, but to much less extent, in the upper limb. The face showed little paralysis when at rest, but on any emotional disturbance the paralysis of the lower part of the face of the usual “cerebral” type was very pronounced.

Mental Condition – During the first fortnight he was drowsy, and slept heavily, but could be roused to answer questions. His answers were often ludicrously incorrect, but he evidently understood the questions. He was very apathetic, and for many days passed his urine in bed. He could not recognise his wife or his old comrades, and he had also difficulty in recognising common objects and their uses. Thus on one occasion he drank his own urine from a vessel, under the impression it was water, and several times he got pieces of ice out of his ice cup, and declared they were sweatmeats. This failure to recognise, that is, to recall previous mental images for the purpose of comparison with present ones, was strikingly shown by his failure for weeks to recognise a fellow workman who met with an accident, and was brought into hospital and placed in the bed next to his.

The most dramatic effect of the accident, however, was a particularly severe form of amnesia.

After three months he was well enough to return home, although the paralysis in one arm remained. A year after the accident one of his doctors visited him to examine him and see how he was doing.

There was hemiplegia on the left side affecting the arm chiefly, but there was also distinct loss of power in the face and leg. He could walk several miles, but required to take frequent rests.

Physically, he was in pretty good shape – his taste, vision and smell were all normal – although the doctor also noted that he had ‘become very fat’.

His mental condition was extremely interesting. On the whole he was somewhat indolent and apathetic, and there was very little control over his emotions. He laughed or cried at the slightest provocation, and was as likely to do one as the other at any remark which was made, and the emotional disturbance did not seem to be the expression of any mental pain or pleasure. His irritability of temper was said to have increased, and he was often hasty in his language, although not violent.

There are striking similarities here with a much more famous case from 1848: Phineas Gage, the American railway worker who somehow survived when a large iron bar was driven right through his skull.

Like Gage, this patient seems to have suffered a frontal lobe injury, which tends to affect personality, decision-making and can have profound effects on the memory.

There still remained a gap in his memory, although a smaller one than that which existed when he was in hospital; then, it will be remembered, there was entire oblivion to all events for twenty years prior to the brain injury. At this later period, however, he was able to recall the more striking events of his life up to five years before the accident-after which all is perfectly blank until about two months afterwards-when he is able to recollect some incidents of his life in the hospital, and he could recall his life in general from then to the time of examination, although he could not trust his memory on small matters. We were unable to trace the development of this partial return of memory, but it seems to have been in part due to the habit of his “mates” of coming in and talking to him of the past and continually reminding him of occurrences which were likely to have made an impression on him.

His short-term memory was just as problematic:

If he went out for a walk by himself he was unable to find his way back, and often failed to  recognise his own house when he was outside, and there was also frequent failure to recognise common objects and their uses, although nothing now occurred so marked as his not recognising the nature of urine and of pieces of ice referred to in an earlier note.

His reasoning processes were fairly orderly, but as owing to the blanks in his memory he often argues from false premises, he arrives at ludicrously incorrect conclusions. For example, he occupies one of the houses built by the railway company for their servants, and, as he has no recollection of working for them for five or six years, he argued that he had no right to be there, and insisted with unnecessary warmth that his wife should pack up and leave the house before they got into trouble for being there.

An unfortunate example of the distress that chronic brain injury can cause, not just to the patient but to their immediate family. Sadly, there was little sign that he would ever get better.

This mental condition is increasing latterly. At first there was merely failure to remember and recognise, now he takes action rather impulsively on the strength of false or imperfect memories.