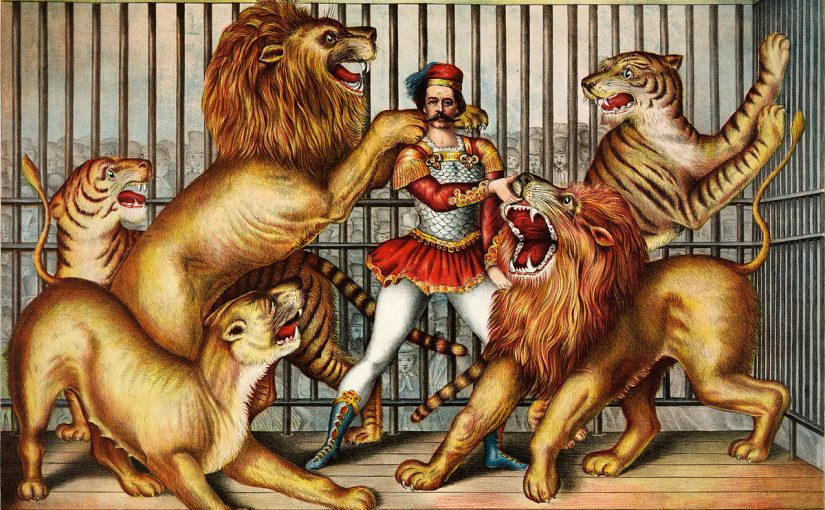 A thrilling scene occurred on Wednesday in this city. A lion-tamer came within an ace of being torn to pieces by a royal Bengal tiger, with which he was imprisoned in a cage.

“Thrilling”? I wonder how many of the witnesses of this ghastly event would have chosen that adjective. The incident took place at a menagerie owned by one Adam Forepaugh, and the unlucky victim was a famous German lion-tamer, Herr Dairous. While attempting to train one of the tigers in Forepaugh’s collection, he found himself pinned down by the animal’s forepaw:

The tiger, with a terrific yell, launched his body into the air and came down upon Herr Darious, bearing him to the floor of the cage. Those who had been attracted to the spot stood palsied by terror as they gazed upon the spectacle of the trainer lying beneath the tiger’s claw.

A quick-witted attendant had the brilliant idea of grabbing the animal’s back leg and giving it a good tug. This had the desired effect: he released his victim for just long enough for the unlucky man to escape from the cage, with only a few scratches to show for the experience.

Big cats were a popular attraction in nineteenth-century Philadelphia, and only a couple of months later a much worse incident took place a few miles away. This incident was reported in newspapers nationwide and even in a medical journal. Dr John Ashhurst, Jr., submitted this account to The American Journal of the Medical Sciences:

J.W., aged 25, a professional lion-tamer, engaged with a menagerie now exhibiting in the outskirts of the city, was rehearsing his part on the afternoon of Tuesday, April 2, 1872, and had placed his head in the lion’s mouth, when the animal unexpectedly closed his jaws.

Certainly a striking opening to a medical paper. The lion-tamer was Joseph Whittle, who worked at a circus variously identified by the newspapers as belonging to a Mr O’Brien, O’Brian or O’Bryan.

The by-standers rushed to the rescue, and with clubs and iron bars, forced the wild beast to loose his hold, when, had his victim made his escape, he would have got off with moderately severe lacerations of the face; unhappily, however, either falling in the cage, or, as other accounts have represented, voluntarily returning with a mad determination to obtain the mastery, the unfortunate man again came within the lion’s grasp, was quickly struck down, and the monster’s jaws again closed, this time upon the fleshy part of the victim’s right thigh.

The doctor suggests that Whittle may simply have fallen over, but all the newspaper reports agree that he made a desperately misguided second attempt to calm the animal himself. This is how the Harrisburg Telegraph describes it: 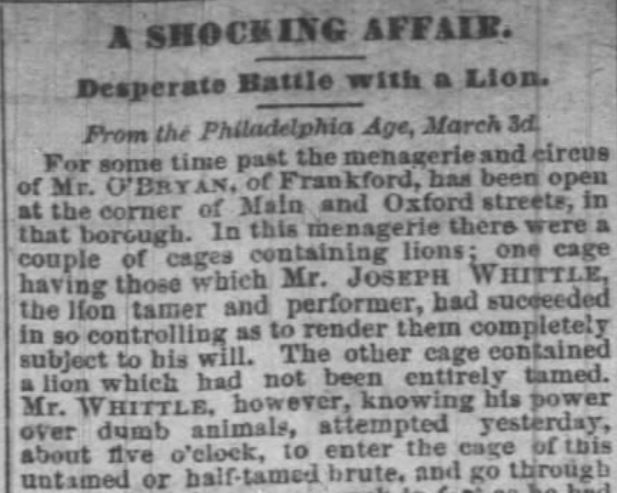 His left cheek was seen to have been terribly lacerated and his right cheek torn, from the jaw-born down to the under lip. The blood was streaming profusely from his wounds, and pouring down his bosom and clothing. Maddened with defeat and pain, Mr. Whittle seized a short piece of wood which he had with him in the cage, and with a courage equal to that of the beast before him, boldly and fearlessly attacked him.

Not wise. And it didn’t end well.

Again the wild beast was driven off, and his conquered conqueror was dragged from the cage, bleeding profusely, and seeming more dead than alive. This was about four o’clock in the afternoon, and the wounded man was taken to a neighbouring tavern, from which he was brought, a little before midnight, to the Episcopal Hospital.

It is strange that he was not given medical attention earlier: he was lying in a pub for eight hours before anybody thought it might be a good idea to take him to hospital.

When admitted, the patient was in a state of profound shock; there were several lacerations about the lower part of the face and chin, the largest wound having laid open the right cheek into the mouth, while on either side of the right thigh were numerous irregular and jagged openings, varying in length from a few lines to two inches, or even more; these wounds appeared to be of great depth, the muscles of the limb having been evidently torn up and mangled in a frightful manner, though the bone, and, as far as could be ascertained, the femoral artery, seemed to have escaped injury.

The doctor observes in a footnote that the worst of the lacerations had been ‘carefully sewed up by a Homoeopathic practitioner who attended the patient before his admission to the hospital.’ Given the mutual hostility between homeopaths and conventional doctors at this date, I suspect the italics are intended to convey heavy irony.

I did not see the patient until about 2 P.M., April 3, when I found him in a manifestly hopeless condition. His pulse was extremely feeble and running at the rate of 172 beats to the minute, his respirations being about 40 in the minute, while his injured thigh was enormously swollen, emphysematous and crackling from the gaseous products of decomposition, and discharging profusely from its various wounds a bloody, sanious, and very offensive fluid.

‘Emphysematous’ denotes an abnormal build-up of gas in the tissues. In this case, probably the result of gas gangrene (clostridial myonecrosis), a dangerous bacterial infection. Dr Ashhurst rapidly diagnosed “traumatic, or spreading gangrene.”

This condition had come on during the night (as I am informed by Dr. Simes, the house-surgeon), and, therefore, in less than eighteen hours from the time of the patient’s injury. I saw the patient again the next day, when he was evidently moribund; there was no pulse at the right wrist, and that on the left was barely perceptible; the right leg, below the knee, was now white, cold, and corpse-like, while the thigh was swollen almost to bursting, black in parts, with the muscles protruding through the wounds, and exhaling a most offensive smell; the discoloration of impending gangrene had already reached the buttock.

The gangrene had spread with astonishing speed. Big cats are not famed for their dental hygiene, and their mouths often harbour huge populations of bacteria: a single bite from those powerful jaws can all too easily result in catastrophic infection. This must have been a horrible sight for his medical attendants, as Dr Ashhurst makes all too clear.

While thus fully a quarter of the patient’s body was literally dead and decomposing, his consciousness was perfect, and his mind clear, when he was spoken to, though he occasionally wandered off in delirium when left to himself. He complained of almost no pain, only a little, he said, about the feet. He died two hours afterwards, just forty-eight hours from the time of his injury. No autopsy could be obtained.

Dr Ashhurst concludes, sadly, that there was nothing he could have done for the man.

The only hope of recovery (and that, of course, a slight hope) for this unfortunate man, would have been found in immediate amputation, at or near the hip-joint; when the patient first came under my observation, his general condition was such as to forbid a resort to any operation whatever.

This case caused a sensation in the press, with gory and insensitive first-hand accounts of the battle between man and lion. After his death there were calls for lion-taming to be banned, and for menageries and circuses to be more tightly regulated; but alas they came to naught.