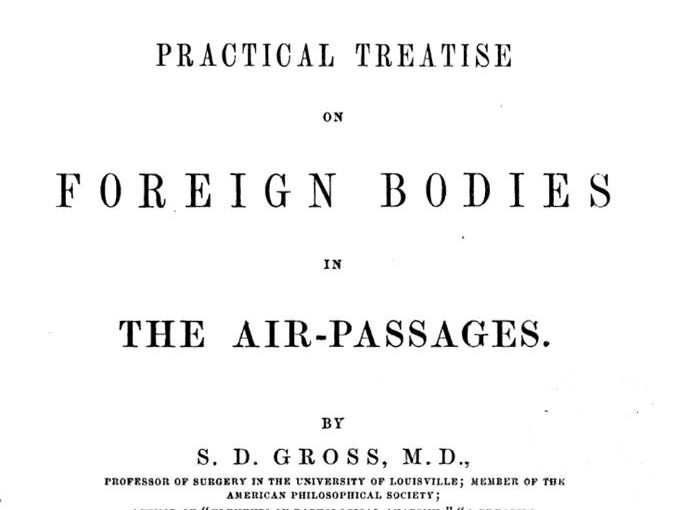 Samuel Gross was a giant of nineteenth-century American surgery, the author of numerous influential textbooks, including the first manual of pathological anatomy ever published in the United States. He is also the subject of one of the great American paintings, The Gross Clinic by Thomas Eakins, which depicts him performing an operation on a young man’s femur.

One of Gross’s lesser-known works is a Practical Treatise on Foreign Bodies in the Air-Passages, published in 1854, a compilation of cases illustrating the extraordinary range of objects inhaled by accident (and methods for their removal). Here is one of the more outlandish examples:

On the 27th of May, 1852, Kirk Peck, of Arundel, New York, aged fourteen years, inhaled, while running, a tin whistle.

Thus instantly turning himself into a cautionary tale which would be employed by several generations of New York parents, no doubt.

The whistle was composed of two pieces of tin, each about one inch in length by one fourth of an inch in breadth, slightly bent in their longitudinal axes, and laid together at their concave surfaces. They were wound with silk tape and silk thread. The annexed cuts (Fig. 7), afford an accurate representation of them; a giving a front, and b a side view, without the thread.

The lad breathed with difficulty immediately after the accident, but in a few minutes the whistle descended lower down into the trachea, and he was relieved. He coughed slightly, but the intelligent gentleman in attendance could not, at first, detect any abnormal sounds in respiration, and the air seemed to pass freely into both lungs.

I suspect the word ‘intelligent’ is here employed with heavy irony.

Professor Hamilton saw him five days after the accident. No air was then admitted into the left lung, except immediately after coughing, when there was a “rushing” sound. He coughed pretty frequently, occasionally expectorating a little blood with the mucus. There was some pain in the lower portion of the left lung. Most of the time, the breathing was easy, and without any feeling of constriction. There was some pain in the larynx, but none in the left bronchial tube, the seat of the whistle. The lad had always been healthy, except that he had had an occasional cough. He had a slight chill on the first of June, but none the next day. Taking into consideration the history and circumstances of the case, Professor Hamilton refused to operate.

Hardly surprising. Foreign objects in the trachea were occasionally removed by surgery even before the advent of anaesthesia using an incision in the neck (trachaeotomy) to gain access to the airway. The tin whistle had passed down lower than this, into the left bronchus, the airway to the left lung, and would therefore have been inaccessible via a trachaeotomy incision except with specialised instruments. As it turned out, surgery proved unnecessary:

On the 27th of August, three months after the accident, while rolling some sacks of wool, and making considerable exertion, the whistle came up to the larynx, but immediately fell back. Two or three days after, he had some fever, with chills, and an aggravation of his cough. On the 7th of September, while making some violent muscular efforts, the whistle again came up, and was instantly thrown from the larynx into the mouth.

A portion of the silk thread had disappeared, and the edges of the tin were quite bright, but roughened. It had remained in the lungs one hundred and four days, and during most of the time had occasioned but little inconvenience. The lad soon recovered his health completely…

…but several months after, he was suddenly attacked with croup, and died.

No autopsy was made.

I wonder whether his death was a consequence of the earlier accident. Croup is an infection of the airways which affects the patient’s ability to breathe. This boy seems a little old to be suffering from it; it seems quite a coincidence for impaired breathing to have caused his death a few months after he had a foreign body lodged in a bronchus. Maybe the ‘disappeared’ silk thread from the tin whistle had lodged somewhere in the lung and caused an infection? Alas, we’ll never know.

One thought on “The tin whistle”