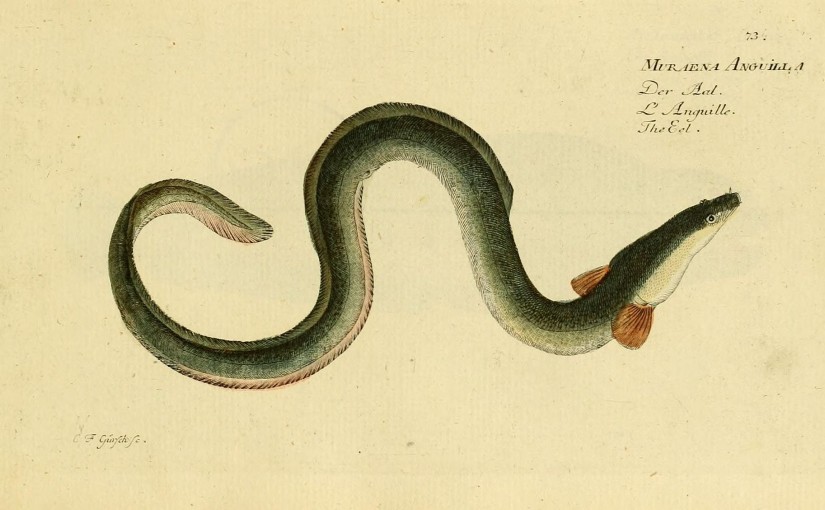 Earlier this week a reader of this blog introduced me to a term I hadn’t encountered before: the ‘bosom serpent’.  The phrase apparently originated in the study of folklore, and describes an ancient tradition of stories in which the human digestive tract is colonised by other animals.  These are typically snakes – as you’d expect – but also include frogs, lizards and many other types of creepy-crawly.

This folk tradition seems to have overlapped with the emergence of modern medicine, and early medical journals contain numerous reports of strange creatures (allegedly) living in the stomach – you’ll find a few examples here, here and here. Coincidentally I recently stumbled across a story about a bosom serpent – or rather a stomach eel – which I was intending to blog about, so here it is.

In October 1838 a physician from Nova Scotia, James Geddes, wrote to the American Medical Intelligencer with this strange tale:

A lad, aged 18, had been for four years subject to fits (the kind I do not know), occurring every month or two; had been under the care of several practitioners. About three months ago was taken ill as usual, and felt sick and qualmish, his mother administered some lac assafoetidae…

Asafoetida is a substance obtained from a herb which grows in Iran and India. In many countries it is still employed medically, particularly in disorders of the digestion.  In nineteenth-century American medicine it was used as an antispasmodic.  ‘Lac assafoetidae’ is a preparation made by dissolving the dried gum in water, producing a milky solution.  A contemporary edition of The Dispensatory of the United States of America refers to its ‘excessively disagreeable smell and taste’, which led many people to prefer using it in an enema.

He soon after vomited, and on examining the contents on her return to his bed-room found he had ejected an eel.

He continued for a day or two in a state of insensibility, and on recovering remembered that four years ago he had a consciousness of swallowing something while drinking out of a brook by the road-side, not far from the harbour. 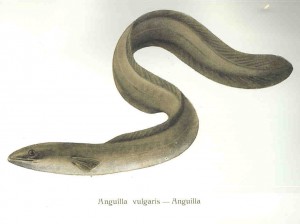 Many persons called to see it. It had, I am told, all the appearance of the common eel; measured fourteen and a half inches in length and one and a half in circumference. Many persons gave credence to the statement, others disbelieved it altogether. Among others, a medical gentleman called, having a jar in readiness; he removed the contents of the [eel’s] stomach and intestines; on arriving at his house he examined them in the presence of his father, also a medical practitioner, and found what was evidently gravel, eel grass, and sandflies.

Gravel, eel grass and sandflies, while usual items for an eel to ingest, are not those one would expect to find in the gastrointestinal tract of an 18-year-old boy. Their presence casts doubt on the whole affair – if it wasn’t hugely dubious anyway.  But the boy stuck to his story:

This has been stoutly contradicted by the family, who assert that he vomited the eel, although no person was present at the time; and they explain the contents as follows, viz.

1st. That he partook of leeks the day preceding.

2d. That he drank freely of molasses and water.

3d. That the sugar was sandy which was put in his tea.

4th. That he is now in good health—free from fits; which has not been the case the four former years.

These do not strike me as particularly compelling arguments. Nevertheless, Dr Geddes still entertained the possibility that the boy really had an eel in his stomach:

The above is a very brief and imperfect outline of the case, but I trust sufficient for you to form an opinion whether an eel could remain for such a length of time within the human stomach and resist its solvent powers. And if so, how?

The editor of the Intelligencer offers a slightly arch response:

We know not what reply to give to our correspondent. That living bodies are capable of existing in the stomach and intestines of animals is undoubted; intestinal worms, as well as the young of the hair-worm (gordius), the leech, the eggs of the gad-fly, &c., received from without, are known to become developed in animals, and to give rise to morbid phenomena in the digestive lube and elsewhere; but we confess the evidence in the following case appears to us apocryphal, and the conclusion, that the animal in question had existed in the stomach for so long a time, in the highest degree improbable, we would not say impossible.—Ed.

One thought on “The stomach eel”