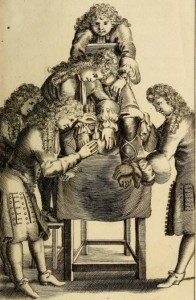 The output of the French baroque composer Marin Marais contains an oddity: a musical depiction of a surgical operation.  A piece from the fifth book of his Pieces de Viole is entitled Le Tableau de l’Opération de la Taille (Portrait of an Abdominal Operation – you can listen to it here), and is an attempt to convey the horror of undergoing the extraction of a bladder stone.  The composer – who had clearly been through this experience himself – adds helpful and sometimes harrowing annotations to the score to indicate what is going on: ‘Knotting the silk restrains for arms and legs’; ‘Here the incision is made’; ‘Introduction of the forceps’.   (An excellent discussion of the piece can be found here).

This operation, known as lithotomy, is one of the oldest in all the surgical canon.  Ancient Indian and Greek doctors described it in some detail, and until 150 years ago it was of course conducted without anaesthetic.  Until a method was found of extracting bladder stones via the urethra (itself not much fun) it involved an abdominal incision and would have been excruciatingly painful.

In 1799 The Medical and Physical Journal reported the case of one Colonel Martin, who decided that he would rather not undergo the misery of lithotomy.  Instead he took matters into his own hands; his method involved inserting an instrument into his penis and up the urethra until it reached his bladder, and then filing the stone away:

I began to file the stone in the bladder in April 1782, and as appears by a note I received from Doctor Rennet Murchison who was at this place as surgeon to the Resident, it soon made an impression upon the stone, and brought away many small pieces which are in my possession. One of these pieces I sent to Doctor Murchison for his inspection. His answer was:

“Dear Martin, I have examined the Stone with a good microscope; it seems to have a solid shell on the external part, but is internally of a loose texture. From this appearance I fancy your mechanical plan has had some effect; but, my dear friend, do not suffer yourself to be so sanguine in your hopes, as to use your file too often, for an inflammation in the bladder might now prove fatal; however, as the internal texture of the stone is loose, and as you have broke the hard surface on the outside, I have no doubt but you may get a great deal of it away, by the cautious use of your instrument.”

I think if I were Dr Murchison I might have expressed my disapproval a little more strongly.

This good man, Doctor Murchison, endeavoured to dissuade me from going on, but as I found daily the good effect of my filing, and never suffered particular pain in doing it, I persevered till the middle of October of the same year, and I think I filed, on an average, at the rate of at least three times in the twenty-four hours; I was at first puzzled how to bring the stone to the neck of the bladder, but I contrived to inject warm water into the bladder, which, endeavouring to discharge, it protruded the stone to its neck; I then introduced my file between the flesh and the stone, keeping my body inclined against a wall all the time, till by a bad stroke I pushed the stone from the neck of the bladder.

Was this really better than undergoing a painful ten-minute operation?

Fear of inflammation I had none; for it once happened that a spasm of the whole urethra fixed my file so firmly that I could not move it. This spasm lasted about ten minutes, and, when relaxed, a great deal of blood came away, and also many small pieces of the stone. In a couple of days, I could renew my filing without any pain, which convinced me that there was no fear of inflammation, and such spasms happened often without any bad consequence.

So that’s all right then.

I am convinced that all persons may cure themselves, as it requires very little address. I do not think it possible for another to operate, as none but the patient can know where it pains him, and he will naturally know, when and how he can introduce the file, as he cannot do it to any purpose, but when the stone is at or near the neck of the bladder. The file being so very small (not thicker than a straw), is easily introduced between the fleshy part and the stone, and the motion in filing does not extend beyond the length of about half an inch… and, by doing it often in the day and night, must at last destroy it, as I did.

Colonel Martin then explains that he had previously been given conventional treatments (mainly emetics and laxatives) by Dr Murchison, which had only made him sicker.

The pain I suffered from that complaint had made me abandon drinking any liquor but plain water, and I had been so much reduced, having at the same time some ulceration near the neck of the bladder, that I had also been obliged to lay aside the use of salt and spices in my food, to avoid acridity in my urine. My food was nothing else but boiled or roasted meat, and water for my drink, taking care to keep my body open by gentle laxatives. But, as soon as the urine became clear, my stomach began to be better, and I grew more easy, and more regular in filing the stone, which I did very often in the day and night, sometimes ten or twelve times in the day, and passed almost every day small pieces, till the whole came away: and, as I said above, I have been very well since; never had any pain, or return of stone or gravel till very lately.

I have used the word ‘lithotomy’ in the heading for this post; strictly speaking this operation was a lithotripsy, because the patient reduced the mass of the stone without any incision being made.

For reasons that are not entirely clear, the article concludes with a letter from Warren Hastings (a leading British administrator in India who was famously impeached by Parliament in 1784).  Hastings writes:

I return you many thanks for the perusal of Colonel Martin’s curious letter; for curious and interesting it is, even to me, who well remember all the particulars of his case, as he has detailed it to you, and even the language in which he has delivered them… I mentioned the fact once to Mr. Pott, who evidently shewed, by his looks and silence, that he did not believe it.

2 thoughts on “The self-inflicted lithotomy”