This case was reported in 1896 in the Medico-Chirurgical Transactions by a surgeon, Rickman Godlee, who was a distant relative of mine (my second cousin five times removed, since you ask).

Godlee was the nephew of Joseph Lister, the originator of antiseptic surgery, whose innovations dramatically reduced the incidence of postoperative infection. A passionate advocate of his uncle’s antiseptic technique, Godlee was also a great innovator in his own right. In 1884 he became the first person to remove a primary brain tumour, an operation widely regarded as the beginning of modern brain surgery. In later life he was one of the most eminent medics in London, serving as President of the Royal College of Surgeons between 1911 and 1913.

This case is taken from an article about foreign bodies in the lung – and this example remained in situ for an unusually long time. It occurred only a few years before X-rays were discovered and applied to medical diagnosis – and gives some idea of how difficult it was to locate a foreign body before even basic medical imaging techniques were available. 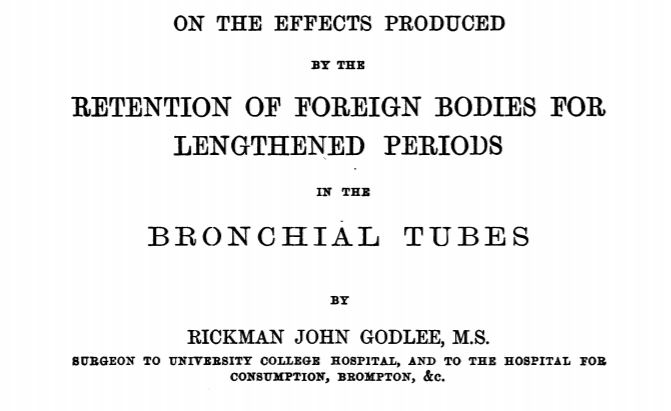 H.C., a boy now 16 years of age, was admitted under the care of Dr. Ringer into University College Hospital on January 5th, 1893, supposed to be suffering from chronic empyema.

Empyema is a condition in which pus collects in the pleural space – between the two layers of membrane lining the lungs. It is caused by infection, for instance pneumonia.

There was a large amount of extremely offensive expectoration, and pus was obtained with an exploring needle. The physical signs, however, pointed to the existence of bronchiectasis on the left side, while the right side was but little if at all affected.

Bronchiectasis is an abnormal widening of the bronchi, the airways inside the lungs. It causes an excess of mucus that can interfere with normal breathing, also making the patient more vulnerable to infection.

I ventured to suggest the possibility of the trouble having arisen from the inspiration of a foreign body, and on questioning the boy – but not before – he told us that seven and a half years previously he had “swallowed” the peg of a peg-top.

Evidently the boy was embarrassed by his mishap. A peg-top (I had to look it up) is one of those small spinning tops, an inexpensive toy that must have been owned by virtually every Victorian child.

We discovered afterwards that obvious symptoms made their appearance eighteen months later, and that two years after the accident the expectoration became offensive.

The point, presumably, at which infection set in.

Under the circumstances I thought it wisest, after removing a piece of the ninth rib opposite the place at which pus was obtained, to stitch the lung to the pleura, and leave the incision of the lung to a subsequent occasion. On the first attempt under chloroform I was not successful, but a few days later, when the boy was sitting up, and with his cavity full, I opened, without difficulty, a bronchiectatic cavity, but found no foreign body.

This minor procedure appears to have been performed without anaesthesia – the patient must have been a brave young man to endure it. His condition improved briefly, but the surgeon was sure that there was still something lodged elsewhere inside his lung.

Subsequently the following methods were attempted for reaching the foreign body:

1. Probing through the wound.

2. Tracheotomy. Searching the bronchus with probangs and wires. Inversion of the patient on several occasions.

3. A second incision was made nearer the spine, by which the healthy pleura was opened, and the lung explored with the finger both behind and on the under surface. All these attempts were fruitless.

Not a pleasant experience for the patient – but without X-rays the surgeon really had no way of working out where the foreign body might be.

During his stay in hospital the patient displayed the classic signs of a chest infection: fever, coughing up blood and mucus.

Ultimately the boy was sent home, and many were sceptical about the correctness of the diagnosis. In October, 1894, however, during a fit of coughing, the rusty peg of the peg-top came out through the wound, in which he still retained a drainage-tube, and which indeed he found a great comfort, and called his safety-valve.

I was surprised to learn that a patient at this date would have been left with a drainage tube in place for as long as 18 months . One might imagine that it would impede his breathing, but apparently not.

For some time we heard discouraging accounts of the boy’s progress. The removal of the cause of offence did not appear to make much difference to his symptoms. It is, therefore, gratifying as well as surprising to hear from Mr. T. Hopkin Davies, of Port Talbot, under whose care the patient now is, that his general health is excellent.

Although the original cause of the problem (the metal peg) had been removed,  the infection lingered. It is likely that his recovery would have been much quicker if the doctors had had access to antibiotics – which, of course, were not yet available in 1894.

From the point of view of self-congratulation the present is the time for publishing this case. More than a year has passed since the expulsion of the foreign body – a very reasonable time, it may be said, in which to form an opinion as to the prospects of a cure.

It does sound as if the boy made a full recovery. Mr Godlee includes a further three cases of bronchial foreign bodies in which the patients were not so lucky, enduring chronic infections that made them semi-permanent invalids. Sobering to think that a course of antibiotics might have restored them to health in a couple of weeks.

4 thoughts on “The safety valve”