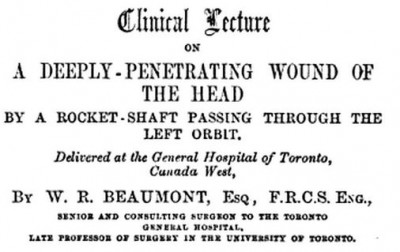 November 5th has long been a busy night for practitioners of emergency medicine.  Injuries caused by fireworks are as old as the things themselves – but one case reported by a Dr Beaumont in The Lancet in 1862 was a particularly lucky escape.  The patient sustained a serious brain injury and somehow escaped with his life:

James W—, aged forty-five, a man of spare make, rather above the middle height, and of ordinarily healthy appearance, whilst standing amongst a crowd of persons, received on the evening of the 4th of May, 1859, a broken rocket-shaft through the left orbit. He told me that he was about twelve yards from the rocket at the time it was fired; that he was looking at it, and remembered distinctly to have seen it held above the heads of the people at the time of firing it. He received this terrific wound without falling, and walked some thirty or forty yards to a tavern, where I saw him ten or fifteen minutes after the accident sitting in a chair, his face and lips pale, and his pulse extremely small and weak. There was no expression of pain, only that of extreme shock from severe injury—pallid, shrunken, and motionless features. There was no symptom of cerebral lesion; but vision of the eye of the injured side was immediately and completely lost, though the eye itself appeared uninjured.

Dr Beaumont could find only one sign of injury, a thin splinter of wood which projected less than half an inch from the man’s eye socket.

I placed him on the floor, half recumbent, his head and shoulders being supported. I then endeavoured to extract with tolerably strong forceps what I supposed to be a small portion of a rocket-shaft, but I found that I could not stir it. I sent for and soon obtained a pair of strong, flat-bladed pliers, with which even I could not move by direct traction the intruded shaft, so tightly was it wedged between the bones through which it had passed. Knowing that the shaft of a rocket is not round, like that of an arrow, but square, I was aware of the small extent to which it could be rotated on its axis; still I found, on trying to do so, that a slight degree of movement on its axis was not impossible, and by turning it several times a few degrees alternately to the right and to the left I at last loosened it, and slowly drew out inch after inch of the shaft, with no small astonishment as the but two or three inches showed themselves. Its extraction was instantly followed by a profuse gush of blood—a stream almost as large as the extracted shaft; but the bleeding almost ceased in five or ten minutes, iced water being applied over the forehead and upper part of the face. I had forewarned his friends that he might possibly die from haemorrhage immediately on the removal of the shaft, which I conceived might have acted as a very efficient compress to any large arteries or veins which might have been lacerated. He, however, did not even faint, and in less than fifteen minutes, without any help, got up from of the floor and walked, saying that he felt quite able to do so. I directed his friends to keep him perfectly motionless, to apply unremittingly iced water to his head, and to carry him gently to the hospital. I also prescribed small and repeated uses of calomel and jalap.

These are both laxatives; the dedication of nineteenth-century doctors to the state of their patients’ bowels is almost touching.

His friends did not take him to the hospital, and I lost sight of him, supposing him to be dead, until the 23rd of June (forty days after the accident), when I found him in good health, strong, and perfectly well except the total loss of sight of the left eye, and loss of sensation in the upper and anterior part of the left cheek, ala nasi, and left half of the upper lip—probably the result of injury to the infra-orbital branch of the superior maxillary nerve. There was no muscular paralysis detectable.

He told me that he was up and dressed, walking about his room, three days after the accident, and that within three weeks he walked a distance of half a mile. He said that he suffered severe headache and vomiting during the first twenty-four hours, but not much pain after that; and had been but slightly feverish. The wound had healed very readily, with scarcely any suppuration, and no pieces of bone had come away. The only treatment adopted was that which I had prescribed—namely, cold water to the head, and a few doses of calomel and jalap.

Dr Beaumont encountered the patient again some time later and reported that he had lost the sight in one eye, and suffered from memory loss – but in other respects was in perfect health.  He concluded – with some justification – that

the patient’s escape from death renders the case one of the most remarkable in the annals of surgery.

One thought on “The rocket man”