Mr J.S. Webster, a surgeon from East Dereham, wrote to the London Medical Journal in 1787 to pass on an unusual case he had encountered in his practice among the poor and needy of Norfolk.

Helen Bunnett, or, as she is commonly called, the owl-eyed girl, is thirteen years old, of a fair complexion, with brown hair, and has all her life enjoyed a good state of health. She was born in a workhouse belonging to East Dereham, in the county of Norfolk; but is now supported in a House of Industry belonging to the hundreds of Milford and Launditch, in the same county.

Houses of Industry were charitable institutions supporting the indigent; the term is virtually synonymous with ‘workhouse’. 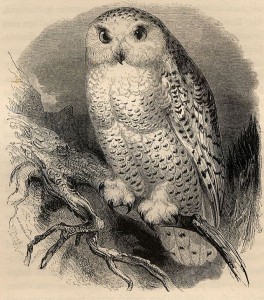 This girl has from her infancy laboured under a peculiarity of vision. What particularly strikes one’s attention, on her entering a room in the day time, is, her looking towards the ground, and her eyes appearing, as it were, sunk in her head; so much so, that the whole ball of the eye seems lost within its orbit, and of course the eyelid so covers it, that you would at first imagine the humours of the eye had escaped from their coats. No appearance of disease is perceptible in the coats of the eye. The choroid is of a whitish or light gray colour. The iris is peculiarly perfect. The pupils are entirely black; and the appearance of each eye is the same.

Mr Webster first tested her vision by showing her a variety of large objects, including a watch, a button, and the key of a door. She was able to identify these, though with difficulty.

I next offered to her bottles filled with medicines of different colours, such as blue vitriolic water, vegeto-mineral water, and others; but in attempting to distinguish these she, in general, failed. I then presented to her view small objects, such as a sixpence, a shilling, pins, &c; but these she could not discover at all.

Upon closing the windows, and darkening the room suddenly, I had my attention fixed upon her eyes, which instantly dilated, and the pupils became as perfect, and as large in proportion, as in any human body whatever; on the contrary, upon opening the windows as suddenly as I before had closed them, the pupils became instantly contracted, and the balls of the eyes appeared, as it were, sunk… Having now again darkened the room so much that I could not myself distinguish objects, I had in readiness the same bottles of medicines as before, and likewise some pieces of cloth of different colours that I had offered to her when the windows were not closed, and which she had then not been able to distinguish: but upon my again offering the same to her in the darkened room, I was agreeably surprised to find that she could tell me the colours of the different fluids in the bottles, as well as the quantities therein contained, and also the various colours of the cloths, excepting of those which we may term mixed cloths; and perhaps in these she failed not from a want of perception, but from not being sufficiently practised in the distinctions of complicated colours. I likewise took a pin, and having dropped it upon the ground, at a considerable distance from that part of the room where she flood, changed places with her, and desired her to look for the pin, which she very soon found. All the time the room remained darkened her eyes were fully dilated, and continued equally so, neither contracting nor increasing in their dilatation.

The girl reported that although she had no difficulty seeing in the dark, or by moonlight, daylight caused her great pain, and she had to shield her eyes against the sun.

From these descriptions it sounds to me as if she was suffering from a condition called mydriasis, in which the iris fails to contract adequately, allowing too much light into the eye.  This is often caused by a problem with the parasympathetic nerves which cause the iris to contract. I suffered from this condition myself for several months following eye surgery, and it isn’t much fun: bright light becomes physically painful, and I ended up wearing sunglasses or a hat for much of the time that I was outdoors.

Mr Webster concludes his article by clearing up a point relating to the girl’s nickname:

The expression of owl-eyed girl, which I have made use of, is not a term given to her by me, but is a distinction she goes by among the paupers in general in the house where she now is.