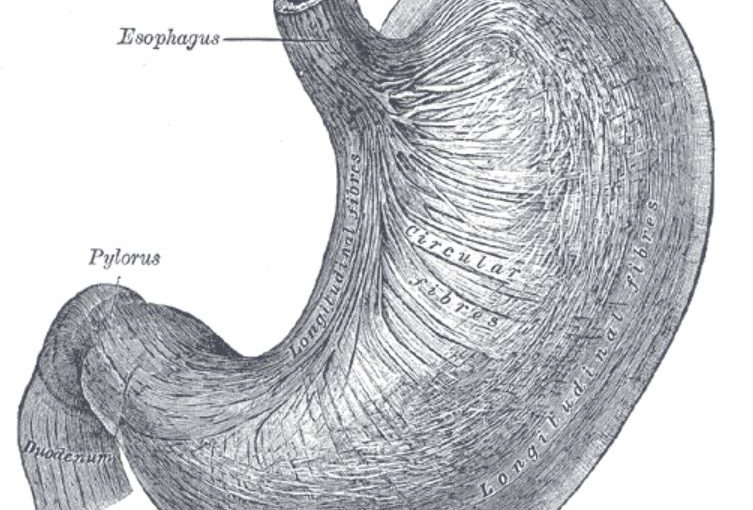 This (almost) incredible case report was printed in The Medical and Physical Journal in 1812, but dates from almost forty years earlier, first appearing in the French medical literature.

A galley-slave, a native of Nantes, entered the marine hospital at Brest the 5th of September, 1774. He complained of cough, pains in the stomach, and bowels; for which M. de Courcelles, physician for the quarter, prescribed some remedies which seemed to afford relief.

Little did the doctor suspect what really ailed his patient. At the start of October a different physician, a M. Fournier, took over the man’s case.

The patient at this time complained of pains in the stomach and vomiting, which much fatigued him. Dr Fournier not being able to ascertain the cause or nature of the complaints, directed some remedies which he thought suitable to the case.

He was not successful, for…

The man died on the 10th day of the month, at two o’clock in the morning, On the following morning the body was opened.

The doctors found evidence of serious inflammation in the lungs. But the strangest finding was that the stomach had been displaced from its usual position, and seemed to contain ‘several hard bodies.’ Dr Fournier decided to postpone the post-mortem until the afternoon, realising that he should show the case to as many of his colleagues as possible.

In the meantime, the chest being open, he wished to trace the oesophagus its whole length. For this purpose he turned over the heart and lungs to the opposite side. In effecting this he ruptured the oesophagus, which occasioned him to perceive a piece of black wood, which reached from the beginning of the canal to the stomach itself. Notwithstanding this singular appearance, he waited till his colleagues arrived before he proceeded to gratify his curiosity.

A few hours later, more than fifty people – physicians, surgeons, students and others – were there to watch the autopsy. Dr Fournier began by pointing out that the stomach was an unusual shape, distorted into an elongated cuboid by its contents. Then he made an incision into the organ and removed a catalogue of items so extensive and bizarre that one of his assistants recorded it for posterity.

List of Articles found in the Stomach of the Man named Bazile.

A portion of the hoop of a barrel, nineteen inches long, and one broad.

This is the object that the doctor had found first, lodged in the oesophagus. It is a really astonishing thing to discover there, at almost 50 cm in length. Next came five pieces of wood described as coming from the broom shrub, ranging from four to eight inches in length, and eleven pieces of oak, most of them about 5 inches long.

A piece of hoop of a barrel, five inches long, one inch broad, and two lines in thickness.

Then there were five pieces of deal, up to four inches long. At this point things began to get really interesting:

A portion of bark from a hoop, three inches and a half long, and one inch broad, being part of the large piece detached from the superior portion which was in the oesophagus, and which had descended into the stomach.

A lump of wood, an inch long, and an inch in diameter.

A wooden spoon, five inches long, and an inch and a half broad.

A tube of a tin funnel, three inches and a half long, an inch in diameter in the upper part, and half an inch on the inferior part.

Another piece of a funnel, two inches and a half long, and half an inch in diameter.

The handle of a tin spoon, four inches and a half long.

An entire tin spoon, seven inches long, the bowl of the spoon bent back.

Another spoon of the same metal, three inches long.

Another ditto, two inches and a half long.

A piece of iron, two inches and a half long, half an inch broad, and four lines in thickness, weighing one ounce, four drachms and a half.

A bowl of a tobacco pipe, with part of the tube, three inches long.

A nail half polished, without the point, with its head, two inches long.

A sharp-pointed nail, an inch and a half long.

A piece of a tin spoon flattened, an inch long, half an inch broad.

Three pieces of metal buckle, of irregular form, each about half an inch long.

A small piece of horn.

Two pieces of white glass, the largest an inch and four lines in length, half an inch in breadth, and of irregular form.

Two pieces of leather, the largest three inches long, an inch broad, and of irregular form; the other an inch and four lines long, and half an inch broad.

A knife with its blade, wood handle, bent, three inches and a half long, and an inch in its greatest breadth.

The total of these several articles was fifty-two pieces, weighing all together one pound, ten ounces, and four drachms.

Truly impressive. But why, and how, did this hardware shop’s worth of stuff get there? Dr Fournier was able to extract little information from the patient himself, but he managed to piece together a few snippets from the man’s earlier history:

He had been a soldier in the marines for thirteen years, and was discharged from the service from his head being deranged. Among other things, his comrades often persuaded him that he was very ill, to which he answered he believed he was, and took to his bed. At that time he had a great appetite, and ate much. Dismissed from the Royal Corps, he returned to Nantes, where, after some time, he was condemned to the galleys.

The life of a galley slave was not an enviable one. They spent their time on board ship chained to an oar, and when they reached their destination they were unceremoniously decanted to a squalid prison by the dockside.

One of his companions, who was subjected to the same punishment, and who was with him in prison, assured me that he has often seen him scrape the lime and mortar which covered the walls of the prison, and put a large quantity of them in his soup, saying that it strengthened him and gave him courage. He also added, that sometimes he had a ravenous appetite, which was attended with copious salivation; he would then eat as much as would suffice four men. But, if he could not obtain a sufficient supply of food, which often happened, for he was passionately fond of tobacco, and sold his rations to procure it, he then would swallow small stones, buttons, leather gaiters, and other substances.

The surgeon spoke to several of the man’s cellmates, who confirmed that they had seen him eat two large pieces of wood shortly before he died.

But, after all the inquiries I was able to make, I could not ascertain when he had swallowed the enormous piece of hoop of nineteen inches.

One of the nurses who looked after him remembered…

…that he said, ‘he had a thousand devilish things in his body which would kill him,’ to which she then paid little attention, considering him mad or foolish.

As it turned out they were both right, although we would use rather different terms for the man’s ‘madness’ today. It seems likely that he was suffering from pica, an uncontrollable urge to eat inappropriate and non-food items. This was a particularly extreme case of the disorder. The author rightly points out one of its most extraordinary features, a mystery:

how he could make a piece of wood nineteen inches long pass the pharynx and oesophagus without rupturing the parts, or causing him to be choked.

3 thoughts on “The galley slave and the barrel hoop”