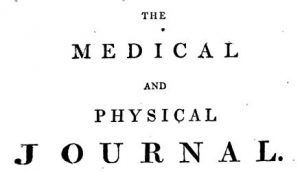 In February 1793 a small British expeditionary force under the command of the Duke of York landed at Hellevoetsluis in the Netherlands. They were part of an international coalition whose aim was to invade and occupy Revolutionary France. Known as the Flanders Campaign, the effort was a failure: the French counterattacked and succeeded in annexing much of the Low Countries.

In 1809 The Medical and Physical Journal reported the story of one soldier who had served in the British forces:

James Clayton, aged 64, a healthy strong man, was admitted into Guy’s Hospital, in the spring of 1808, under the care of Mr. Cooper, for a disease of the scrotum. In 1792 [sic] he was a private in the expedition to Holland, under the command of the Duke of York, and being exposed in the retreat of the army to severe cold, his scrotum was frozen; the part according to his description first became white, and soon changed to red and afterwards black; at the end of a fortnight the scrotum burst, and great part of it separated so as to expose and lay bare the testes.

Ouch. I’m shifting uncomfortably in my chair. There is little doubt about the cause of this catastrophe, since the change in colour from white to red and then black is a classic symptom of frostbite. The whiteness is caused by vasoconstriction, the closure of blood vessels, as the body redirects blood from the extremities in an attempt to maintain core temperature. The black coloration was a sign of necrosis – tissue death.

At the commencement of the complaint he was obliged to march on foot, but soon after the separation of the parts, he was carried upon a waggon, and after marching and riding for near a month, he found temporary quarters in a barn; during his stay here, the wound healed, the testicles being covered, as he said, with new skin; this took place about two months from the separation of the scrotum; during this period, the only application made use of was a poultice composed of bread, lard, and water; the discharge was but small in quantity ; he remarked that the scrotum and penis afterwards continued much enlarged.

The bread, lard and water concoction probably did little, other than provide a soothing balm. It’s fair to say that a month of riding and marching was not the ideal way of promoting healing.

After landing in England, he was discharged, and laboured as a husbandman for his livelihood, without inconvenience from his former complaint, till about Christmas, 1807, fifteen years after his return from Holland, when being much exposed to wet and cold in his occupation, the scrotum began to look red and swell, with much pain; this swelling increased and became larger than his two fists, and after suffering much pain for three weeks, the principal part of the scrotum separated and again laid the testicles bare.

The man now sent for medical advice, and the surgeon to whom he applied sent him to Guy’s Hospital, at which time he was in the following state.—His health was good, and his constitution appeared pretty strong. The line of separation was in a healthy granulating state; the left testicle was larger than the right, and almost completely exposed; the right testicle was smaller and not so much exposed. The testes were but slightly sensible, the man not complaining upon their being gently pressed or handled; the penis was very large and flaccid.

This is, I think, an indication of inflammation rather than a compliment.

The man continued for several weeks in the hospital, during which time the granulating process gradually proceeded; nothing material was done on account of his obstinacy.

The ‘granulating process’ is a phase of tissue healing. Physicians still use the term ‘granulation tissue’ to describe new connective tissue which appears on the surface of a wound.

Constitutional symptoms of disease now appeared; he complained of shortness of breath, with pain and uneasiness in the chest, and a cough; some medicines were ordered, but these symptoms increased, and he soon after died, as supposed, of Hydrothorax.

Hydrothorax is an accumulation of fluid in the pleural cavity, the space around the lungs. It is usually caused by heart or liver failure, so it’s not immediately obvious why it might be a consequence of this man’s complaint.

The unusual confinement in the air of an hospital, probably, assisted in bringing on and hastening his death.

This may be true, if his death was the result of an infection he picked up in the hospital. The doctors may have misdiagnosed a chest infection such as pneumonia.

It was Mr. Cooper’s wish to remove the left testicle, and then to bring the separated edges of the sore together by sutures, and this could not be done unless the testicle was removed; but the man would not consent to the operation though he was repeatedly solicited and advised. As no other probable assistance could be afforded, the parts were left to nature, and no doubt the wound would again have healed by granulation if the man had lived. I regret I cannot send you a sketch of the parts.

Mr. Cooper pointed out the singularity of the appearance repeatedly to the pupils, and, if I mistake not, his assistant made a drawing of it.

Alas, this artistic production was not printed in the journal and is unlikely to have survived. I’m sure my readers would have enjoyed looking at an exploded scrotum while eating their lunch.

3 thoughts on “The exploding scrotum”