Exciting news from the world of medical technology was reported in the Boston Medical and Surgical Journal in 1850.  The following announcement was a late example of the mania for galvanic (i.e., electrical) medicine which began in the eighteenth century. For many decades, after the investigation of electrical phenomena began in earnest, electric current was believed to be a panacea for all manner of ills, and devices were advertised as offering symptomatic relief or even cure. Electrical bracelets and belts had been on the market since at least 1800; but as far as I’m aware this is the earliest reference to electrical spectacles. 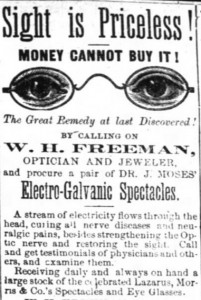 Mr. J. S. Paine, optician, of Worcester, Mass., has invented something new in the way of spectacles. He has constructed that part of the bows holding the glasses, and the bridge, of two metals, viz., silver and zinc — and he is confident of having thus achieved an important improvement by an uninterrupted flow of electricity, which he believes invigorates the eyes, and actually relieves them from a world of small physical annoyances, independently of waning vision. By touching the tip of the tongue on the nose-piece, an unmistakable sensation is produced, and a flash of light is instantly perceptible. Mr. Paine thinks that he feels a cool current constantly passing by the orbits, while the glasses are worn. Like a genuine Yankee, he secures a patent, of course; and if the discovery equals his expectations, the millions of spectacle wearers of all countries will soon begin to pay tribute to New England ingenuity. The subject is one that should command the attention of physicians, since a new province for exploration is exposed to view.

If Mr Paine claimed to hold a patent he was not being entirely truthful. US Patent Office records contain no reference to him or his invention.  But a patent was issued almost twenty years later, in 1868, to a Judah Moses of Hartford, Connecticut, for an ‘improvement in galvanic spectacles.’ His patent declares that

My invention consists in the combination, with the temples or front of a pair of spectacles, of an electro-galvanic battery or batteries arranged in such relation thereto that an electrical current may be produced, whereby a person is enabled to apply electricity to the nerves of the head and obtain the therapeutic effects thereof.

The beneficial action upon the nervous system obtained by a proper application of electricity is so well known at the present time that it is not necessary hereto enter into a discussion of the subject; suffice it to say that by applying an electrical current to the nerves of the head, through the medium of a pair of spectacles, I obtain excellent therapeutic results.

I think it’s fair to say that they did not.