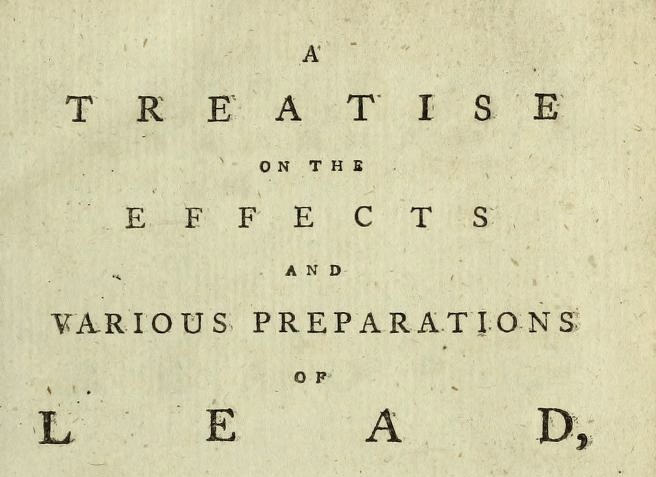 In 1803 a surgeon from Dumbarton in Scotland, Alexander Hunter, wrote to the London Medical and Physical Journal to report this remarkable lucky escape:

An apprentice of William Ewing, a cooper, in this neighbourhood, had an ulcer on the fore-part of the tibia with considerable inflammation, for which he was ordered a poultice with acetate of lead.

Lead (II) acetate enjoyed a considerable medical vogue in the second half of the eighteenth century, thanks in part to the efforts of the French surgeon Thomas Goulard. In 1766 Goulard published his Treatise on the effects and various preparations of lead, particularly of the extract of Saturn, for different chirurgical disorders, which went through many editions in several languages. As Goulard acknowledged in his preface, lead was not a new therapeutic agent: the Roman physician Galen had recommended it in his treatise on simple remedies almost two millennia earlier. But its various uses had been forgotten, and the Frenchman was successful in reviving it. His distinctive contribution was the preparation he termed ‘extract of Saturn’ – a solution of lead acetate with lead oxide.  [In alchemy, the symbol used to represent lead was the same as the astrologers’ symbol for the planet Saturn, hence the association between the two.]

Goulard was careful to point out that he recommended his ‘extract of Saturn’ only for use ‘in external complaints’ – and with good reason, for by the eighteenth century it was well known that lead compounds (and specifically lead acetate) were toxic.

As this article [lead acetate] is used by linen-printers, he got from an adjoining print-field, a lump which could not have weighed less than a pound, being, as he declared, the size of his fist, which was none of the smallest.

A ‘print-field’ was ‘an establishment for printing and blocking cottons, etc’, according to one contemporary dictionary. Lead acetate was commonly used to ‘fix’ dyes in textile printing.

When the boy came home, he laid down this piece on the kitchen table, and left it.

You probably have some inkling of what happened next.

Shortly after his mistress, an old, short-sighted woman, came in with cabbages for the family dinner, laid them on the table upon the acetate and cut them down with a knife; by this operation both were incorporated; the whole was then put into a pot, boiled with potatoes, and chopped into a mass for dinner. This dish was entirely eaten by the master, mistress, a daughter, her husband, and two apprentices.

A dish containing over 500g of lead (II) acetate, a potentially fatal dose even when divided into six portions.

After dinner the lad wished to prepare his poultice, but the materials could not be found. As a curious taste had been observed by them all in their food, they became alarmed; and on examining the table, it was evident that the sugar of lead and cabbage had been bruised together, as some in a powdered state still adhered to it.

According to one Victorian chemistry textbook, lead acetate has a ‘sweet, followed by an astringent, taste’. It has at times been used as a sweetening agent, although its toxicity makes it deeply unsuitable for this purpose. In the days when cane sugar was an expensive luxury, lead acetate was sometimes added to foodstuffs by unscrupulous traders. Luckily, at least one member of this family realised the danger to which they had been exposed.

I was sent for directly, and was soon with them; an emetic was given to five of them, which operated well, and they never found any further inconvenience; the sixth, however, one of the apprentices, as he felt nothing uneasy about him, refused to take anything; but although the whole he had taken remained in his bowels, he never had the smallest complaint, and was as regular in his belly as before.

But why did the surgeon submit this case report to the journal in the first place? You might assume that Mr Hunter’s intention was to show that lead poisoning could be averted by making the patient vomit. In fact it was rather the opposite: he wanted to demonstrate that it was possible to ingest a large amount of lead acetate without harm.

Hunter’s article was a response to an earlier paper written by an Irish surgeon, Michael Ryan of Kilkenny, in which he reported using lead acetate to treat haemoptysis (coughing up blood, probably caused by tuberculosis). Ryan believed that, used properly, lead compounds were safe for internal use. He pointed out that other known poisons – including belladonna, arsenic and mercury – were already part of the physician’s armoury and safe if used in sufficiently small doses. Alexander Hunter intended to add weight to Ryan’s argument, expressing the hope that this ‘useful medicine’ might be more widely adopted.

There was a serious flaw in Hunter’s argument. While episodes of acute lead poisoning do occur, the symptoms can also be slow to appear – sometimes a month or more after ingestion. So unless he kept the apprentice under observation for many weeks, Hunter could not be sure that the apprentice had escaped unscathed. Although lead-based medicines were briefly fashionable in the London hospitals, their horrible side-effects meant that they were soon banished from the pharmacopeia.