In 1835 the Boston Medical and Surgical Journal published a series of articles about cheese.  For several months New England residents had been falling ill after consuming the delicious comestible, and nobody knew why.  A Dr Alcott contributed this account of one such outbreak:

At the raising of a building belonging to Seth Thomas, Esq. in Plymouth, Litchfield county, Conn. a few years since, an entertainment was prepared, consisting chiefly of bread and cheese, with cider. The company partook of it about sunset. During the evening, nearly a hundred persons were taken with vomiting, which, after continuing for some time, was accompanied with diarrhea. Some of the individuals were attacked with great violence, others were affected but slightly; none, however, died.

Either way, I bet the residents of Plymouth, Litchfield County stayed well clear of Seth Thomas’s new building for a few weeks afterwards. 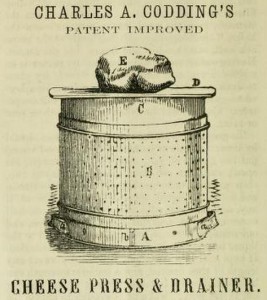 The physician under whose care most of the patients fell, suspecting the cause must be poison, treated them accordingly. Even after the local cause of disease seemed to be entirely removed, such was the state of the system—at least in those cases that came under my own observation—that the slightest tonic remedies invariably did more of harm than good. In my own experience—and I believe in the practice of those whose experience was much larger than my own—mucilaginous substances, with the lightest of food, along with rest, constituted the safest treatment.

On inquiry, it was found that a cheese, bought of a farmer in the neighborhood (famous, however, for making good cheese), had been cut and used for the entertainment; and that every one who was sick had eaten more or less of this cheese. It was then tried on one or two dogs, who were also made sick.

I’ve never fed a dog cheese, but I suspect that many would be sick even if there were nothing wrong with the cheese.

To settle the point more decisively, it was ascertained that there was no other article present of which all the sick partook—bread, cake, cider, or water—except the cheese.  A part of the suspected cheese was sent to Prof. Silliman, for analysis, but no poison was detected.

A similar occurrence took place a year or two earlier, in Winchester, in the same county. In this, as in the former case, the mischief was attributed to cheese, but nothing of a poisonous character could be detected. The particulars in regard to the latter case have escaped my recollection; except that there was a striking similarity to the occurrence at Plymouth.

As far as I know the mystery of the poisonous Boston cheese was never solved.

One thought on “The mystery of the poisonous cheese”